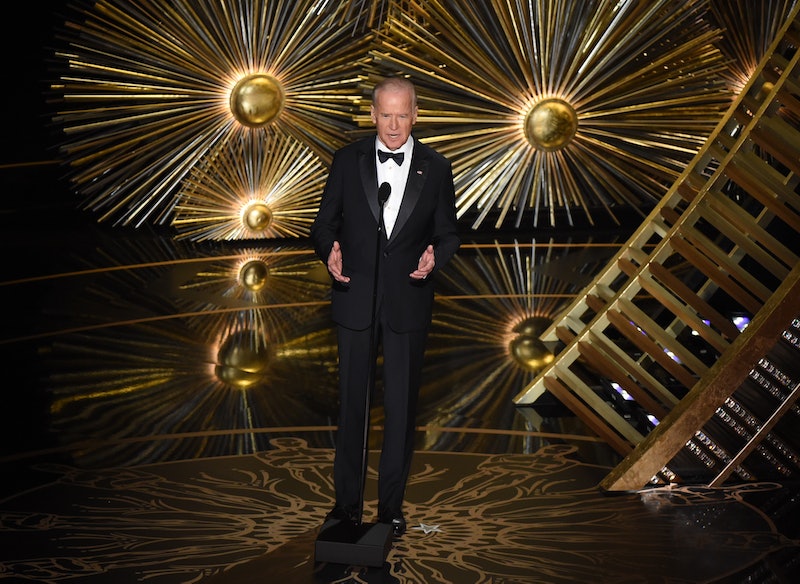 Joe Biden took the Oscars stage to a standing ovation Sunday night, introducing Lady Gaga's emotional performance dedicated to victims of sexual assault. Biden also implored Oscars viewers to "take the pledge," which symbolizes a personal dedication to intervening to stop sexual assault, or, in the words of the White House campaign itself, "take the pledge and make a personal commitment to help keep women and men safe from sexual assault." Minutes later, the campaign's website went down, presumably after an influx of viewers visited the site to find out more.

"Too many men and women around the country are still victims of sexual abuse," Biden said, after declaring himself the "least qualified" of all the people onstage tonight. He wasted no time before drawing attention to the issue of sexual assault on college campuses: "We can and will change the culture," he said, "so no abused women or man will think they did anything wrong.

As of late Sunday night, the official It's On Us campaign website was producing an error page.

Biden went on to introduce a powerful performance by Lady Gaga of a song that speaks to the same theme, "Til It Happens To You," which ended with dozens of college-aged students appearing onstage alongside Lady Gaga.

The White House launched the It's On Us campaign last September. In a statement at the time, the administration said:

More like this
How Getting An Abortion Has Changed From The ’60s Through Today
By Amanda Chatel
34 Quotes That'll Inspire You On Juneteenth & Beyond
By Syeda Khaula Saad and Siena Gagliano
The UK Abortion Laws In 2022, Explained
By Sophie McEvoy
5 Ways To Stand In Solidarity With Women In America From The UK
By Sophie McEvoy
Get Even More From Bustle — Sign Up For The Newsletter