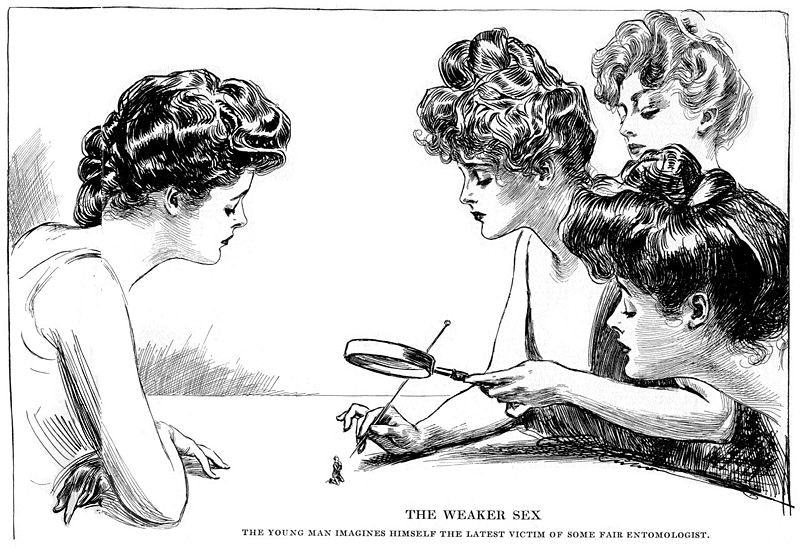 Luckily for any student of laughing-at-ridiculous-sexism (which is one of the best academic pastimes), there are many candidates for Most Stupendously Silly Statement Made About Women In The History Of Humankind. What about the Victorian medical specialist William Acton's proclamation in 1857 that "the majority of women (happily for them) are not very much troubled by sexual feeling of any kind"? Or televangelist Pat Robertson's much more modern, but no less astonishing, tirade that "feminism is a socialist, anti-family, political movement that encourages women to leave their husbands, kill their children, practice witchcraft, destroy capitalism and become lesbians"? Ah, the joys of being a woman: basically, throughout 98 percent of human history, it's involved being told insulting and ridiculous things by members of the opposite sex.

But there are some examples so spectacular, so influential and/or so maddeningly daft that they deserve a special place in our hearts. They need to be gold-plated and put above everybody's bedstead, under the title "This Is Why We Need Feminism". And this is only the stuff we know; ancient Mesopotamians or lost civilizations now long dead may have had even more hilarious opinions about women's weaknesses, inability to have their own emotions, or think in straight lines. (I don't know what precisely is so excellent about straight lines, myself, but I'm not an all-knowing man.)

So here, enjoy what are perhaps the 10 most ridiculously sexist things ever said, and I'll understand if you need a minute afterwards.

"The female is a female by virtue of a certain lack of qualities; we should regard the female nature as afflicted with a natural defectiveness."

This famous bit of idiocy was the standpoint on the female body and mind for the duration of Greek and Roman ancient civilization; it's famously quoted by Simone de Beauvoir as the most influential bit of female-as-corrupted-male thinking for thousands of years.

"... A female is deficient and unintentionally caused. For the active power of the semen always seeks to produce a thing completely like itself, something male. So if a female is produced, this must be because the semen is weak or because the material [provided by the female parent] is unsuitable, or because of the action of some external factor such as the winds from the south which make the atmosphere humid."

Ah, good old Thomas Aquinas, beacon of Christian thought, hugely influential thinker, and proponent of the idea that sperm must always want to create men and that if it manages to create ladies, there must have been some mistake. The problem that neither men nor women would exist without a womb to bake them in appears not to have confounded him all that much. If that isn't enough, he says elsewhere,

“If it were not for some [divine] power that wanted the feminine sex to exist, the birth of a woman would be just another accident, such as that of other monsters [= a dog with two heads, a calf with five legs, etc.]”

"Nature intended women to be our slaves... they are our property; we are not theirs. They belong to us, just as a tree that bears fruit belongs to a gardener.... Women are nothing more than machines for producing children."

In case you still thought Napoleon Bonaparte was some kind of lady-loving charmer, even considering he divorced his much-loved Josephine (causing her massive distress) because she hadn't managed to give him an heir, you've got a lesson coming to you. What are we, ladies? TREES. What do we want? SOME DUDE TO MANAGE OUR ORCHARD.

4. When Cato The Elder Argued That All Women Are Wild Animals

“Woman is a violent and uncontrolled animal, and it is useless to let go the reins and then expect her not to kick over the traces. You must keep her on a tight rein.... Women want total freedom or rather — to call things by their names — total licence. If you allow them to achieve complete equality with men, do you think they will be easier to live with? Not at all. Once they have achieved equality, they will be your masters.”

This was Cato the Elder mouthing off on the repeal of the Oppian Laws, which were hugely restrictive of women's behavior and dress, and the women who were protesting to get it taken off. They succeeded. It's quoted in Livy’s History of Rome and still held up as an example of stunning rhetoric. How do you feel about being a horse?

5. When Pliny The Elder Warned That Menstrual Blood Is Poisonous

"On the approach of a woman in this state, must will become sour, seeds which are touched by her become sterile, grafts wither away, garden plants are parched up, and the fruit will fall from the tree beneath which she sits. Her very look, even, will dim the brightness of mirrors, blunt the edge of steel, and take away the polish from ivory. A swarm of bees, if looked upon by her, will die immediately."

Look, Pliny The Elder had some fairly ridiculous ideas documented in his Natural Histories, but this one kind of takes the cake. Menstrual blood's had interesting connotations of witchcraft and power in many cultures, but Pliny voiced the apparently widespread belief in ancient Greece that it was violently poisonous. Wouldn't that be so much more convenient than having to reach for the aconite.

6. When Plutarch Did Not Approve Of Independent Lady-Emotions

"A wife should have no feelings of her own, but share her husband's seriousness and sport, his anxiety and his laughter."

This, utterly hilariously, comes from Plutarch's Conjugal Precepts, his advice for good marriages and happy conjugal bliss in the future. The solution is that women should basically be subservient as hell, having no emotions at all and just following how her husband's feeling in case she offends him. (He also recommends that women shouldn't be allowed their own friends, and should just have their husband's. Erm. Nope.)

"Finally — woman! One-half of mankind is weak, typically sick, changeable, inconstant — woman needs a religion of weakness that glorifies being weak, loving, being humbled as divine."

Awww, Friedrich Nietzsche's The Will To Power contains such virulently anti-woman titbits it'd be adorable if it weren't also kind of horrifying. Nietzsche's real attitude towards women has been debated by scholars ever since, but this particular quote seems to indicate that, at this particular point in time, he was NOT feeling them.

8. When Jean-Jacques Rousseau Said Ladies Only Need To Be Taught About Men

"The whole education of women ought to be relative to men. To please them, to be useful to them, to make themselves loved and honored by them, to educate them when young, to care for them when grown, to council them, to console them, and to make life agreeable and sweet to them — these are the duties of women at all times, and should be taught them from their infancy."

Jean-Jacques Rousseau is here discussing the ideal education for a fantasy woman he called Sophie, and every woman who's ever suffered minor flickers of irritation in her AP History class will be pleased to know she's actually just meant to learn how to please men. In every way. And nothing else. Who needs math when you could be learning how to tend to a husband's every mood?

"The sexual life of adult women is a 'dark continent' for psychology." Freud was never able to understand "what women want," and in The Question of Lay Analysis he overlaid the mysteries of female sexuality with the metaphor of utterly mysterious new lands that are hideously difficult to explore. We're not that difficult to understand, but the notion of female sexuality as weird, dangerous, foreign, and opaque is hardly the most flattering one in history.

10. When James Joyce Was A Bit Of An Idiot

"Men are governed by lines of intellect — women: by curves of emotion."

For a literary genius, Joyce was kind of an idiot when it came to ladies. Are we really not allowed to run on the "lines" of intellect? Do our emotions govern everything we do, including mathematical problems and running countries? Can we be trusted with anything in case we have a weeping fit in the middle? I mean, come on.

More like this
At 14, Tatiana Maslany Was Obsessing Over Tamagotchis & The Spice Girls
By Gabrielle Bondi
Scotland's First Period Dignity Officer Has Sparked Backlash
By Darshita Goyal
Beyoncé & Madonna’s “Break My Soul” Remix Honors A Group Of Black Icons
By Stephanie Topacio Long
25 Things I've Reduced My Life To, In Addition To WFH In My PJs
By Ginny Hogan
Get Even More From Bustle — Sign Up For The Newsletter