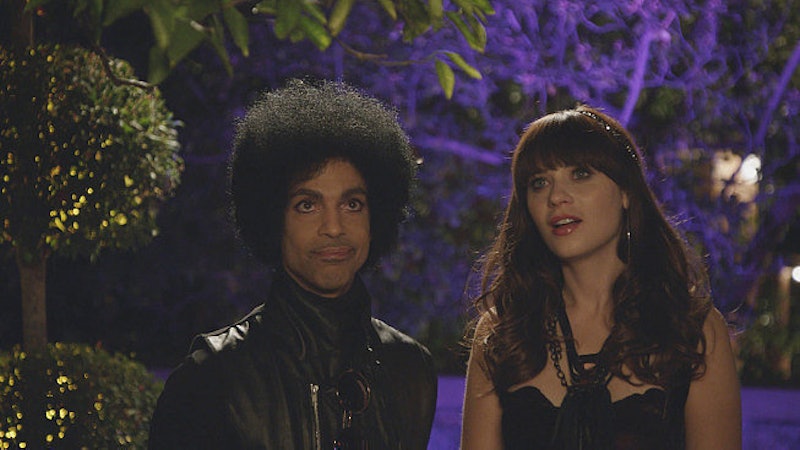 While the Super Bowl's ratings may have been slightly down compared to last year's game (perhaps because the outcome was pretty much decided in the first quarter), luckily, the same can't really be said for the shows that followed it. According to EW, last night's post-Super Bowl episode of New Girl averaged huge ratings, pulling in its biggest audience ever: 25.8 million viewers. Also potentially helping the ratings was the highly-hyped appearance by Prince, who was there to help Jess get over her fear of telling Nick she loved him.

The audience for the telecast of Brooklyn Nine-Nine that followed was slightly lower — 14.8 million — but still a gigantic jump for the show, since it was averaging only around 4 million viewers every week.

So, how do these numbers add up against previous post-Super Bowl telecasts? Well, they're high, but hardly the highest in history: New Girl performed better than Elementary did on CBS last year (that episode pulled in 20.9 million viewers), but not nearly as well as CBS's Undercover Boss did in 2010 when it pulled in 38.7 million viewers. Similarly, in 2012, an NBC episode of The Voice pulled in 37.6 million viewers. Still, though, 25.8 million viewers is a huge achievement for live TV viewings these days!

Now, as for whether or not these higher numbers will translate into better ratings in the weeks to come — that remains to be seen.

More like this
Twitter Is Freaking Out Over Rihanna’s 2023 Super Bowl Halftime Show Announcement
By Stephanie Topacio Long
24 Years Ago, 'Friends' Dropped Its Most Underrated Ross & Rachel Episode
By Grace Wehniainen
Netflix Reveals First Look At Wednesday In The 'Addams Family' Spinoff Series
By Bustle Editors
Pro Footballer Zander Murray Is "Blown Away" By Support After Coming Out
By Sam Ramsden
Get Even More From Bustle — Sign Up For The Newsletter