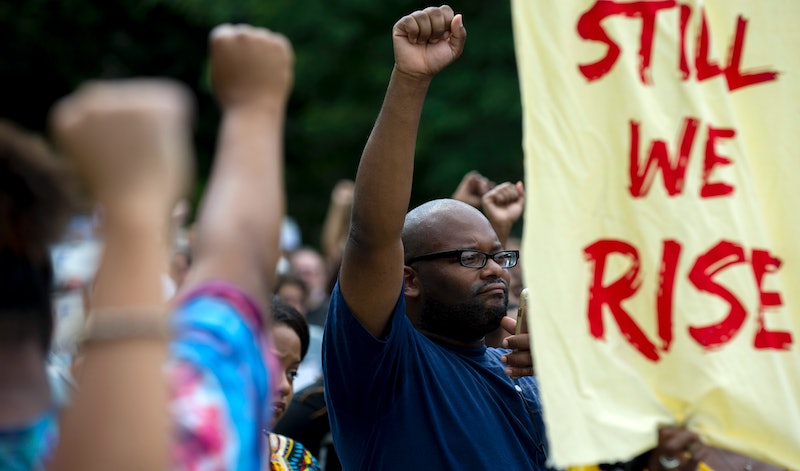 If you're the sort of person who plans your reading material way in advance — or whose To Be Read list is so long that you plan years in advance by accident, then we have a title for you: The Hate U Give , a young adult title that was just acquired by Balzer + Bray after a bidding war between no less than 13 publishing houses. Which should tell you something about how badly you need it on your shelf.

The Hate U Give by Angela Thomas is a young adult novel inspired by the Black Lives Matter movement. The main character, Starr, is busy trying to navigate life in an impoverished neighborhood while attending an upper-class private school when her life is turned upside down after witnessing a police officer shoot one of her friends. Thomas was initially concerned that a young adult novel about such a topic wouldn't be attractive to publishers, and even originally contacted her now-agent Brooks Sherman via Twitter because she wasn't sure if she should even try sending out queries. However she not only found an enthusiastic agent, but attracted offers from 13 publishing houses, including all of the Big Five publishers.

Balzer + Bray, an imprint of HarperCollins, eventually prevailed, and although the final figure for the novel hasn't been disclosed, Publishers Weekly reports that sources say it was a six-figure deal.

“I was struck from the very first pages,” co-publisher Donna Bray of Balzer + Bray told Publishers Weekly. “What an accomplished debut. [Thomas] painted a picture of this girl, this family, and this community in such an authentic way that I rarely see in YA literature.”

She went on to say, "I wasn’t alone in my feelings .... Other houses felt that it was a special book. I’m really happy to have gotten it [and] to launch the career of someone so smart and who is such a good writer.”

Thomas, who started the story in 2011 while a student in Belhaven University’s creative writing program, originally conceptualized the piece as a short story, but it quickly grew into a novel length project. The title, she explained, comes from one of the tattoos of late hip hop artist Tupac Shakur, T.H.U.G. Thomas said that Shakur's music and his message had a great influence on her. “What society feeds into youth comes back later and kicks society in the butt,” Thomas told Publishers Weekly. “These kids who are being blamed for their own deaths are still kids.”

So like I said, it sounds like this is a novel you want to put on your list ASAP. Who knows, maybe by the time it comes out, you'll finally have worked down to it on you To Be Read list!