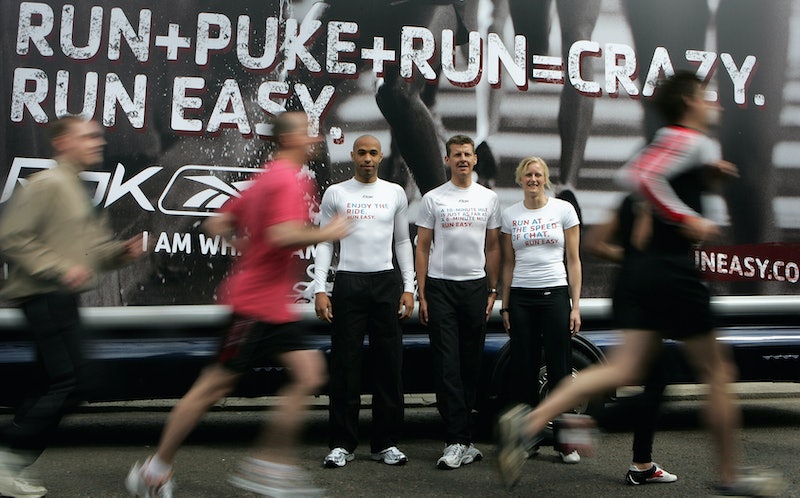 Throughout the 2016 election cycle, presidential hopefuls have talked about a myriad of issues. From national security to immigration reform to free college, there are a few salient topics that inevitably get mentioned at every debate. One issue, however, has hardly been mentioned and that is the issue of America's fitness and health efforts. In an attempt to Make America Fit Again, Reebok challenged the presidential candidates to run a mile in under 10 minutes.

The national campaign emerged on Feb. 29, the day before Super Tuesday, to bring awareness to health and fitness across the U.S. Of the 14 participating Super Tuesday states, Alabama, Arkansas, and Oklahoma rank among the least healthy states in the country, for reasons including smoking levels and physical inactivity, according to the United Health Foundation. On the opposite side, Minnesota, Vermont, and Colorado are among the top 10 healthiest states. With this in mind, Reebok wanted to shift the national conversation to the importance of mindfulness when it comes to health for Americans, including our presidential candidates.

Head of Global PR Dan Mazei mentioned over email that in previous elections, candidates' fitness routines were very much at the forefront of their day-to-day musings. Mazei noted presidents like George W. Bush, who enjoyed cycling; Bill Clinton, who jogged around the neighborhood; and Barack Obama, who played basketball whenever he had a chance. Unlike years past, though, this year's presidential hopefuls haven't exactly made their fitness routines public. One could, of course, argue that a candidate's fitness regime is irrelevant to their ability to manage a nation; but nevertheless, it is becoming a part of the conversation again.

In order to really determine who is "fit" to run our country, Reebok challenged every presidential candidate to run a mile in under 10 minutes. Then, Reebok will donate $50,000 on behalf of each successful candidate to a health-related charity of their choice.

The campaign exists exclusively on social media, primarily Twitter, where supporters are encouraged to reach out to the candidates using #FitToLead. Although Mazei said Reebok's initial strategy was to focus on the most and least healthy Super Tuesday states, he said that the campaign will continue in earnest after March 1 as word hopefully spreads to the candidates' inner circles. With busy campaign and travel schedules, and a packed day on Super Tuesday, Mazei says that as of now, there is no deadline to complete the Reebok challenge.

We have not placed a deadline on this intentionally. Our belief in the power of fitness isn’t predicated on a countdown clock; if a candidate would like to take a week to warm up their legs before stepping up, and showing that this matters to America and our future, we will still happily make good on our commitment.

The thinking behind the challenge is that health and fitness are vital to our country's wellbeing and future, and Reebok wants to make a philanthropic effort to have each candidate prove they care about increasing our nation's awareness about health. As for completing the mile in under 10 minutes, Mazei says this is "the same challenge 6 year olds are tasked with as part of the President’s Challenge."

Reebok employees and supporters alike have taken to Twitter to push the candidates to prove they are #FitToLead our country.

Although they are a fitness company entering the political sphere, Mazei made clear that Reebok's intentions are simply to help improve the health conditions of our country in a positive way through this challenge. "Reebok isn’t a Beltway machine; we just want to elevate an issue that matters deeply to us and our future as a country."