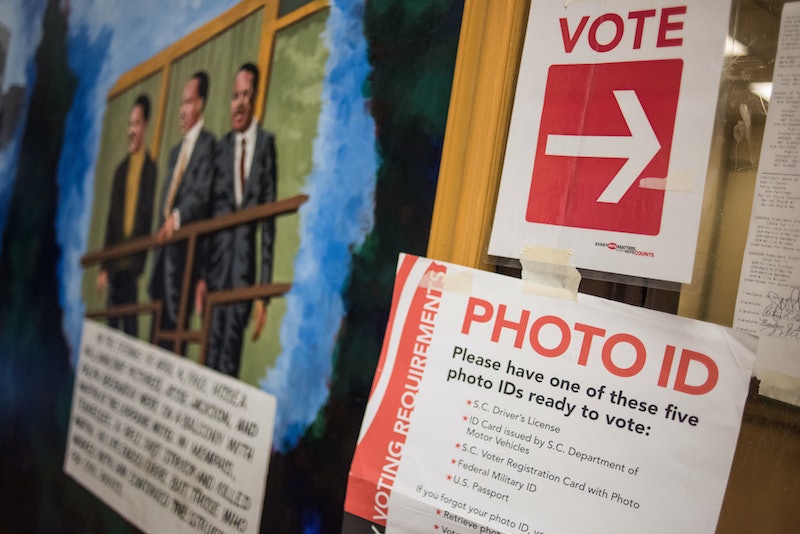 Several states quickly enacted restrictions on who could vote following a 2013 decision by the Supreme Court invalidating a key segment of the Voting Rights Act of 1965. Of the 13 states participating in Super Tuesday through either primaries or caucuses, five now enforce rules ranging from asking voters to show photo ID before casting their vote to requiring proof of citizenship to register to vote.

Georgia, Tennessee, Texas, and Virginia now require voters to present photo identification to poll workers before being able to vote. Alabama requests voters provide some form of photo ID but allows for anyone without identification to still cast a vote if two election officials sign an affidavit attesting to their identity.

In Texas, the state with the largest number of delegates at stake on Super Tuesday, a federal court found 608,470 registered voters reportedly don't have the identification state legislatures now mandate for voting, the Washington Post reported. That means more than half a million voters in just one of the states observing Super Tuesday could find themselves left out of the election process because it's just not true that "everyone has ID," despite what proponents of the laws tell you.

What counts as proper identification varies by state. In Alabama, for instance, students can use photo ID cards issued by any public university to vote, whereas state-issued student identification does not qualify as proper ID in Texas (where, unsurprisingly, a concealed-carry handgun license qualifies as an accepted form of ID) or Georgia.

But the recent restrictions on voters aren't simply limited to what happens at the polling place on election day. Of the Super Tuesday states with voter restrictions, Alabama and Georgia also require residents show proof of citizenship through either a birth certificate or passport when registering to vote.

Voter ID laws such as those currently in place in Alabama, Georgia, Tennessee, Texas, and Virginia are likely to have more of an impact on Democrats than Republicans as they have been shown to disproportionately affect minority voters, which make up a significant portion of the party's voter base in six of the 11 states holding Democratic Super Tuesday contests.

A study on the effects of voter ID laws by political scientists at the University of California at San Diego found "substantial drops in turnout for minorities under strict voter ID laws" during elections held between 2008 and 2012. According to the study, minority participation dropped 4.7 percentage points in general elections and 5.7 percentage points in primaries. In lowering the turnout of voters traditionally aligned with the Democratic party, strict voter ID laws could potentially "minimize the influence of voters on the left and could dramatically alter the political leaning of the electorate," a report issued with the study said.