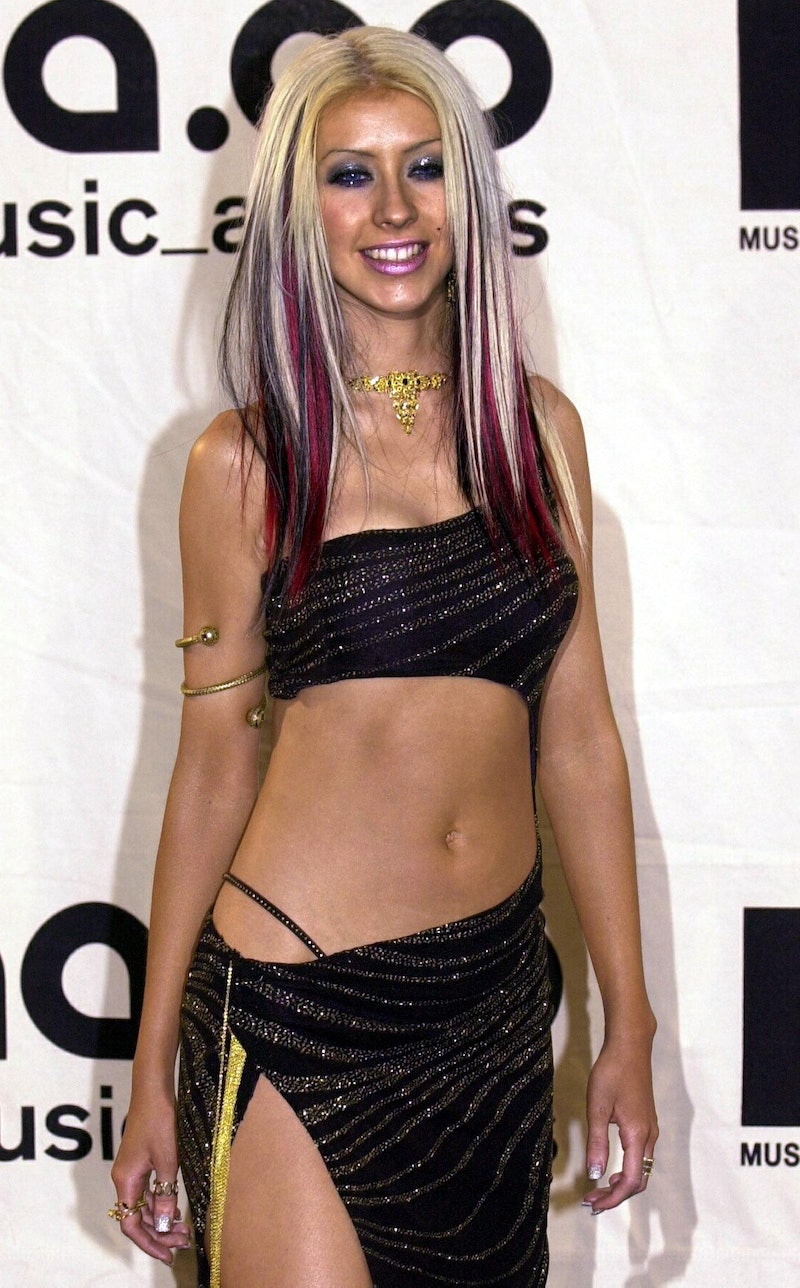 Hair has long been a hot topic in Hollywood, and while the trends of today are all well and good, they don't even come close to the hairstyles of the early '00s. As a young tween-aged girl growing up in the 2000s, I looked to celebrities like Christina Aguilera, Britney Spears, and Gwen Stefani for the 411 on what was cool in fashion and beauty, and the on-trend starlets never let me down. Mint-green tresses à la Kylie Jenner and Kim Kardashian's platinum blonde locks may be all the rage now, but back in the day it was all about chunky highlights, colored undertones, and subtle streaks of color.

Let's transport back to the 2000s, a world where you couldn't tune into TRL or watch the Video Music Awards red carpet without another wow-worthy celebrity dye-job that made you totally envious. In fact, I vividly remember bringing a photo of Christina Aguilera's red streaked hair to my hair stylist and asking for the same type of underneath highlights. Those were the days. Of course with the good, also came the bad, and there was some really bad celeb dye-jobs back then, but most of the color styles as still as gorgeous as ever.

From Jessica Simpson's blonde & brown streaks to Avril Lavigne's pastel pink tresses, here are 13 celebrity dye-jobs that you wanted in the 2000s. Perhaps they will even inspire your next hair color look, because these styles have totally come full circle.

If there was one celebrity dye-job that practically defined the early 2000s, this was it.

I was totally obsessed with Richie's black and blonde combo while watching her on The Simple Life.

Bold contrast in color was all the rage back then. I'm not really sure how this look would hold up today but Jessica Simpson totally pulled it off.

Today we see full pastel-colored manes (Uhm, Kylie Jenner), but once upon a time it was all about subtle color in small sections.

As one of the biggest hair chameleons of our time, Rihanna can do no wrong in the hair department. She totally started this super streaked hair trend.

Stefani was one of the first to do super platinum (almost white) hair, and it became her signature look pretty quickly.

It's funny how everything old becomes new again. Pink wowed the public with her bright blue strands back in the 2000s, and now pretty much everyone is dying their hair blue.

Remember when Mary-Kate had a stint with reddish locks? It was short-lived but totally awesome.

Queen Bey was way ahead of the game with her subtle ombre.

People were obviously obsessed with under the neck lowlights in the '00s.

Why were we all so into very fake red hair back then?!