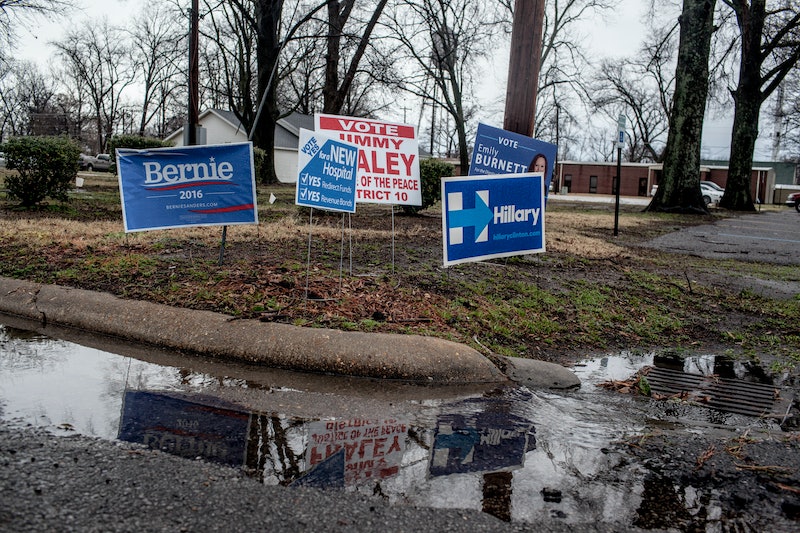 Obviously, with any big political events come big political jokes and tweets. Super Tuesday is no different in that respect. The Twitterverse is awash with hilarity, and the Internet as a whole is raring to go at all times. Give the 'net something to talk about, and talk about it they will.

Yes, Super Tuesday is upon America, and within the country presidential races are happening in 13 states: Alabama, Alaska, Arkansas, Colorado, Georgia, Massachusetts, Minnesota, Oklahoma, Tennessee, Texas, Vermont, Wyoming, and Virginia. However, of these 13, Wyoming is not awarding any delegates, Alaska is only awarding delegates to Republicans because only the GOP caucuses are happening there on March 1, and Colorado is holding both caucuses on March 1, though Republicans won't get their delegates until a later date. Not complicated or anything, right? That's American state sovereignty for ya.

What's this Super Tuesday's big joke? Will a scandal occur? Is a presidential candidate going to do something accidentally hysterical that will immediately go down in political history as an instant classic? Only the course of the night will reveal the truth. Take a look at the best tweets and jokes of Super Tuesday as the event progresses across the nation!

There's always a party pooper, but hey, it's cool.

Not exactly a joke, but if you made this, seriously, tweet me. We need to become friends.

Woah, things just got serious all of a sudden.

Sure, politics is a serious business, but Americans can use a joke or two to break up the seriousness — and volatility — of the election cycle. These jokes certainly do the trick!