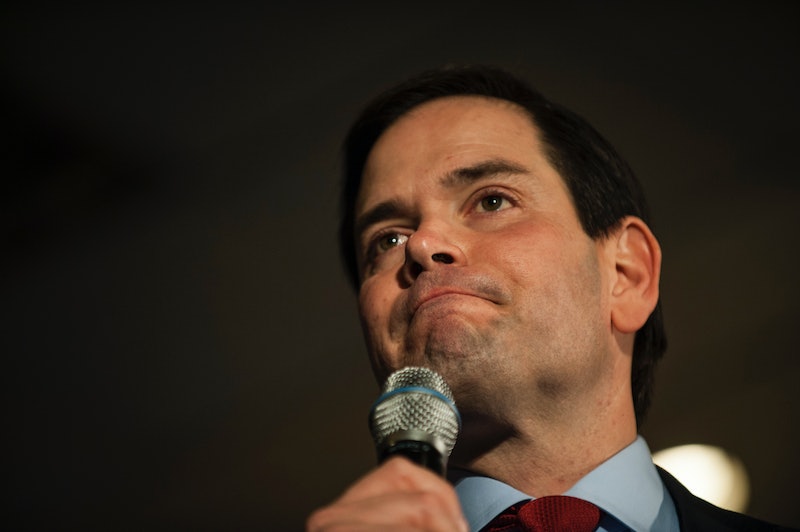 Well, the surge that some Republicans were desperately waiting for didn't exactly happen on Tuesday night. In the so-called Super Tuesday primaries and caucuses across the country, Republican frontrunner and outspoken businessman Donald Trump won big, particularly in garnering support from key states like Virginia and Georgia. Florida Sen. Marco Rubio, on the other hand, didn't gain the ground that he needed to in order to usurp the top spot from Trump. Shortly after the day's first Republican races were called, Rubio's campaign became the butt of Super Tuesday jokes from across the Internet, showcasing the sad-but-true reality that the candidate and his operation may have to come to terms with.

Rubio — and basically everyone who doesn't like Trump — had hoped for a strong showing on Tuesday, the biggest day of the nation's primary voting system. Although Rubio recorded large shares of the vote in places like Virginia, those shares weren't enough to surpass Trump in the race for the nomination. In a race that has been fragmented by too many candidates and virtually hijacked by the bold antics of Trump, Rubio's campaign had been seen as a more respectable contrast for the so-called Republican establishment. Given the results of Super Tuesday, though, the establishment may be running out of delegates to win ... while the non-establishment probably has some laughing to do:

Let's get one thing straight: The race to the White House is far from over. As has happened before in this race, candidates can receive delegates even when they don't win a state's vote outright. That being said, Rubio's Super Tuesday performance seems to have left voters wondering: Where and how much can he actually win?