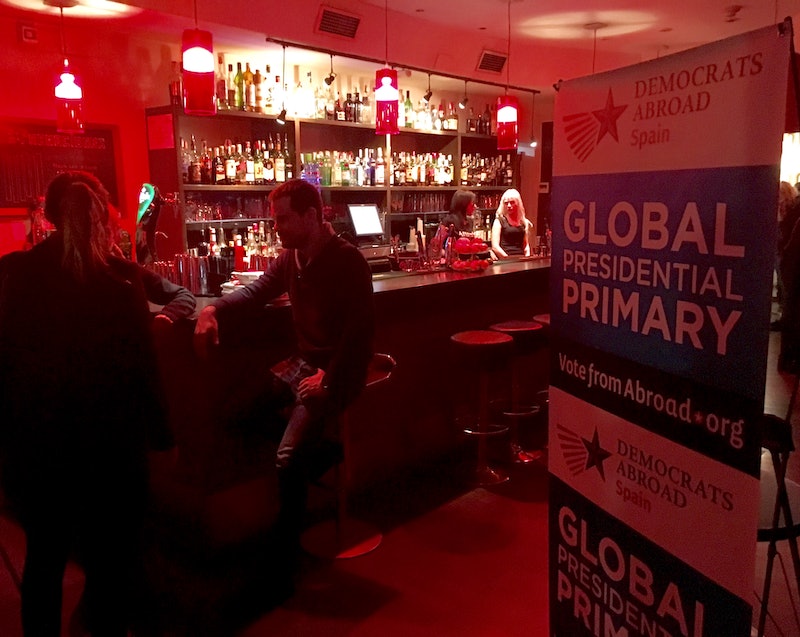 Was your polling place in your local courthouse, a high school gymnasium, or perhaps a church basement? Let me tell you: Your precinct is doing it wrong. Last night in Madrid, more than 400 Americans, including myself, showed up at a Super Tuesday polling place unlike any you'd find stateside. One: It was a bar. There was booze, free food, and a band. And two: It started at 7 p.m. Can you say "Spanish time"? As soon as voting began, the space was filled with eager Democrats, not only voting but also having a good time.

The Madrid event on Super Tuesday — or Super Martes, if you will — was hosted by Democrats Abroad Spain as a part of the Global Presidential Primary. Democrats around the world are able to vote until March 8 at similar polling places in 40 countries. If these locations are too far or open at inconvenient times, then ballots can be mailed, faxed, or even emailed in. These voters send 13 normal delegates to the Democratic Convention — just one less than the state of Wyoming. Eight superdelegates get to go, too (though each of them only get a half vote).

Students studying abroad, English teachers, and longtime Spanish residents — all of them American citizens — waited in a line that stretched about 50 people long for nearly the entire four-hour voting window. In line, voters chatted with local media and debated over Bernie and Hillary. Some even dressed the patriotic part, should anyone confuse living overseas with being un-American.

Once inside, voters had to walk by the bar. For any of you worried about democracy, there were no beers or sangria before voting. Much like your polling place at home, everyone had to be registered. If you had done so online, you just needed to show an ID to get your ballot. If you hadn't, you could register on the spot with volunteers from Rock the Vote.

The ballots were different. Unlike in the U.S., where balloting in a primary is secret, in the Democrats Abroad primary, you have to write your name, your address in the U.S., and your address overseas directly on the ballot. Then you sign it and you're all set. Into the ballot box it goes.

The ballot box may look a little bit like when you voted for high school prom, but don't worry. It's all on the up-and-up. After ballots from the event are counted, they're sent off to Germany, where they're recounted with ballots from around the world.

After voting, why not get a glass of wine or a gin and tonic and wait for the results? That's what a big portion of the attendees opted for, mingling with volunteers and representatives from Spain's center-left Spanish Socialist Workers' Party. The donated snacks were remarkably American: pulled pork and burgers all around. Others headed down a floor to hear a concert by local band The Youthness.

Perhaps this wouldn't work in the United States proper, but it would give a whole meaning to Rock the Vote.