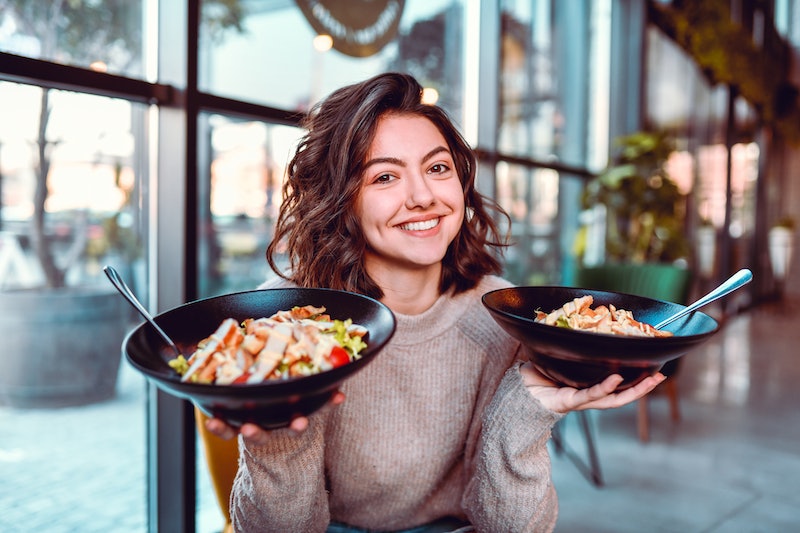 Growing up we are taught that in order to live a healthy lifestyle we need to eat a proper breakfast, lunch, and dinner. But why do we eat three meals a day? Is there actually a biological reason for chowing down at these regimented times? Should I feel guilty for having a big ol' cup of coffee for breakfast and then snacking throughout the day when I’m hungry?

It seems the three meal rule is more of a cultural model than a biological necessity. “The number of meals eaten every day is a cultural pattern people have adopted because there's comfort in predictability,” Paul Freedman, Yale University history professor and editor of Food: The History of Taste, told How Stuff Works. When work hours became regularized, the big three became integrated into our daily schedules. Hence, the nine-to-five and the three-meals-a-day are symbiotic. But modern work schedules are changing, and it seems the traditional meal plan is suffering for it.

As children we are told that “breakfast is the most important meal of the day.” This slogan was promoted throughout the 1920s and ‘30s by the US government. There is evidence to support that eating breakfast improves cognitive function and performance at school — giving kids the energy they need to succeed.

Another reason behind breakfast is that children are able to concentrate better when they are not focusing on the fact that they are hungry. But eating "a balanced breakfast" might not be as important as we assume. Breakfast got its lofty reputation in the mid-19th century during the Industrial Revolution. Workers heading off to taxing jobs needed a hearty meal in the morning, and the trend caught on with all social classes. Today, many Americans are forgoing breakfast all together, about 15 percent in total, due to busy work schedules — or, at least for me, the wish to sleep in as late as possible.

In a survey administered by the US Department of Agriculture, most respondents described eating primarily at noon and around six at night. Many diet plans tell us that eating breakfast helps people maintain a healthy weight, but that is not entirely true. If you are active, breakfast can help burn calories faster, but it doesn’t decide how many calories you are going to consume during the day (or magically stave off snacking), says research by The American Journal of Clinical Nutrition and Medical Daily.

The Romans ate only one meal, and that was lunch. Eating more than one big meal around noon was considered way too indulgent for them. Today, most of us eat takeout or a pre-packaged sandwich in front of our computer; seeing lunch as a quick bite to sustain us till dinner. But during the Industrial Revolution, lunch was an integral part of the laborers' day, giving them a short respite between the long hours at the factory.

And over time, lunch held its importance. Watch any episode of Mad Men and you'll see that an extended three-martini lunch was a key part of conducting business in the 1950s and ‘60s. And I remember even in elementary school, there was no sweeter sound than the lunch bell, where everyone could trot down to the cafeteria for 45 blissful minutes. But like breakfast, many Americans are shifting importance away from lunch, focusing their attentions on dinner as the main meal of the day.

In the 1950s, dinner was a cultural phenomenon. The “family dinner” became the sacred cornerstone of American households in the Leave It To Beaver-style, and throwing glamorous dinner parties was the height of entertaining. I know I feel guilty when I get home late and eat a bowl of popcorn for my nightly sustenance. But it seems I’m not the only one, as the snack food industry is booming. We can thank the microwave dinner, introduced in 1986, for altering our perceptions of a formal “home cooked” meal. Culturally we like routine, and indeed sometimes our bodies crave predictability as well. But, just because you eat when you feel like it doesn’t mean you are unhealthy, so go on, graze as you please!