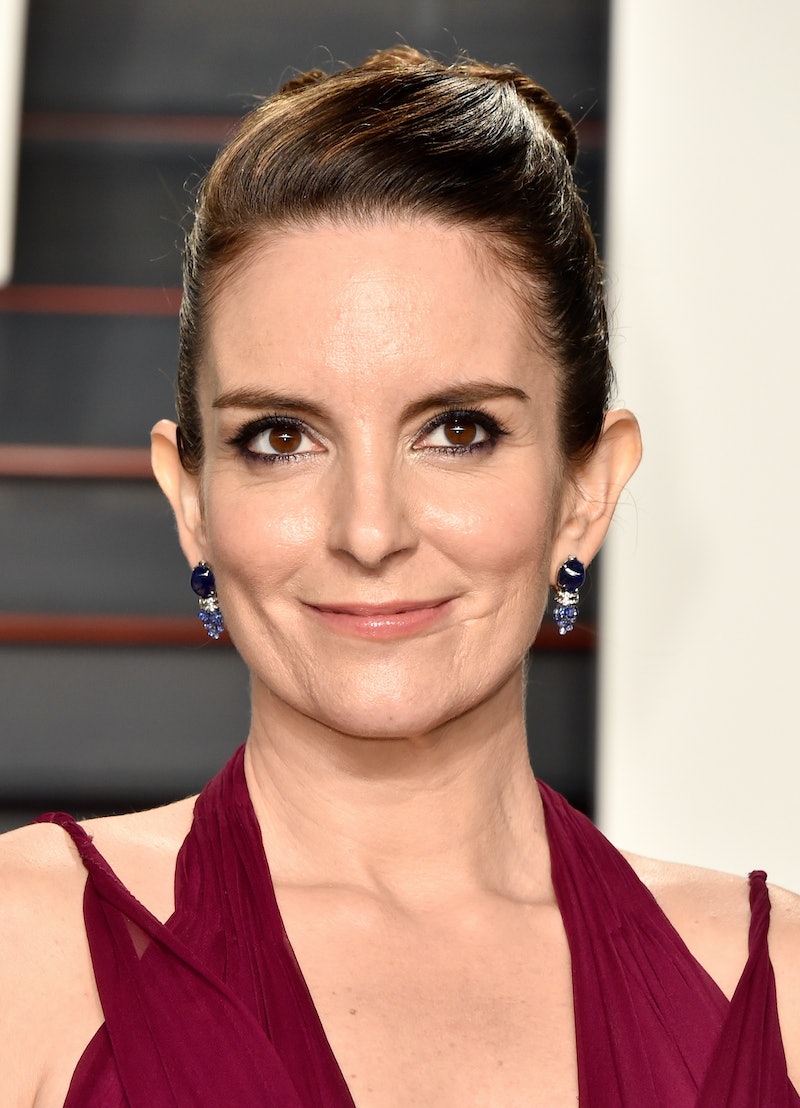 Women are funny and always have been, but they rarely get the respect, money, or credit they deserve. That's why Tina Fey's recent comments about how women in comedy get at something real that no one seems to want to talk about. When the Whiskey Tango Foxtrot star sat down with Town & Country, she took on her least favorite topic: How it is to be a female comedian in 2016. "Every single interviewer asked, 'Isn't this an amazing time for women in comedy?' People really wanted [Amy Poehler and I] to be openly grateful — 'Thank you so much!'" Fey told the magazine. "And we were like, 'No, it's a terrible time. If you were to really look at it, the boys are still getting more money for a lot of garbage, while the ladies are hustling and doing amazing work for less.'"

For a few years now, the idea that it's an "amazing time for women in comedy" has been widely circulated, as if comedy isn't still male-dominated. You may hear about the success stories — the Feys, the Poehlers, the Amy Schumers, the Kristen Wiigs, the Melissa McCarthys — and even though they are "winning" and their success shouldn't be underscored, it's on a level that is not nearly as high as their male counterparts. Fey's quote finally bursts that bubble, forcing us all to look at the reality of what it's really like to be a woman in comedy. And it turns out, it's a lot like being a woman in any other occupation where she's making less than her male counterpart while doing the same thing.

Last year, comedian Megan Koester wrote a piece for VICE titled "Why It Sucks To Be A Woman In Comedy" — a bold statement, not unlike Fey's "terrible time" comment that talks about how the success stories of female stand-up comedians like Schumer, Sarah Silverman, Chelsea Handler and Tig Notaro are not the rule, but the exception. Stand-up is often a catch-22, since the only way to make any real money touring is if you have a comedy special with your name on it. But, to get one of those, you need a following. "If you're a broad without a Netflix special to your name, the chances of you being able to monetize your stand-up, in even the piss-worst clubs of the most obscure Midwestern enclaves, is minuscule," Koester wrote. But, the same standard isn't true for male comedians who seem to be able to book gigs and get their own stand-up specials on Netflix with nondescript accolades based on a Comedy Central appearance or a well-received tweet.

This may have something to do with the hierarchy of stand-up, which starts with comedians performing at alternative open mics on their way up to headliner status at a major comedy club. Then there is the step-ladder hierarchy that exists once you play more established gigs. You start as an MC who opens the night, then move to a middle of the night slot once you get a little more well-known, and finally close the night once you're an established name. The latter being the way you actually make some real money off your comedy.

Bitch Magazine crunched the numbers on how much stage time female comedians get by looking at the 2011 to 2014 (excluding December 2014) lineups from Carolines, a well-established comedy club in New York City. The magazine made it clear that it's tough for even white male comedians to rise in the ranks, but more stage time definitely increases your chances.

This tidbit in mind, Bitch found that there were 290 female MCs out of a total 1398 MCs, which means just over 20 percent were female. They found that middle-of-the-night female comics were roughly 14 percent of lineups (833 women out of 5,908 comics) and female headliners accounted for only eight percent. That's just 110 women out of 1346 total headliners. This is of course just a snapshot, but this is of a club that happens to hold women-only showcases, which have allowed many women the chance to headline shows.

It's easy to brush this off, and to say stand-up comedy is hard for everyone to break into until you really get famous, but it's happening for female comedians at all levels.

When Tina Fey says this is a "terrible time" for women in comedy this is what she's talking about. She doesn't mean women aren't putting out good work — far from it — but despite all that good work, there were no female comedians on Forbes' 2015 list of Highest Paid Comedians. By the way, this was during the "Year of Amy Schumer" when she seemed to be the most-talked about working comedian — not even she raked in enough money to make the cut.

Even Fey, whose long list of achievements include being the first female head writer for Saturday Night Live, the author of the New York Times best-selling memoir Bossypants, writer of Mean Girls, and the star of Sisters — which has made over $100 million in the box office worldwide, according to Box Office Mojo — still has to worry about being underpaid. In Town & Country she addressed this year's Golden Globes host Ricky Gervais' joke that he was paid the same as what Fey and Poehler made together to host the year before. "I immediately texted my agent: 'That's not true, right?'" Fey told Town & Country while laughing. Still, she did make it clear: "It's not true."

Until Fey doesn't have to make that kind of statement, let's all agree something still needs to change until it's a good time for women in comedy.

More like this
What Does The Presley Family Think Of 'Elvis'?
By Arya Roshanian
What Is Miles Teller's Net Worth? How The 'Top Gun: Maverick' Star Made His Millions
By Meg Walters
Jurnee Smollett’s Heart Is Healing
By Rebecca Carroll
Kimberly J. Brown & Daniel Kountz Looked Back On Their ‘Halloweentown’ Romance
By Stephanie Topacio Long
Get Even More From Bustle — Sign Up For The Newsletter