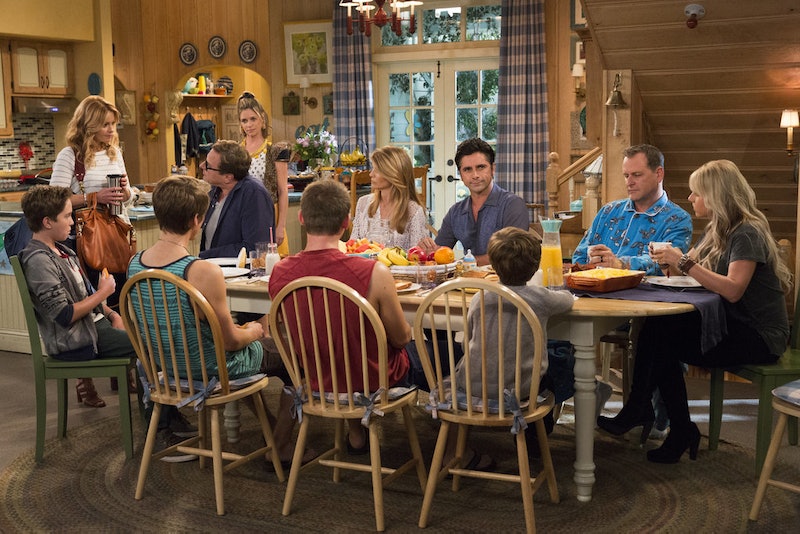 Moments before watching the Fuller House premiere episode, my husband looked at me and said, “I’ve never seen Full House.” After the initial shock wore off, I took the opportunity to explain the big sister idol worship of D.J. Tanner, the hunkiness of Uncle Jesse, and how no one needs to care about Michelle’s absence in the spinoff. I also ran through the catchphrases so he would get the in-jokes. After prepping for and watching the first episode, I’m not going to say he enjoyed it, but he knew what was going on. So, do you need to have watched Full House to enjoy Fuller House ?

With the family comedy reboot debuting 29 years later, the target audience for the Netflix series is going to be mixed. Nostalgic millennials are tuning in to relive their ‘90s childhood, some children of the ‘80s and ‘90s are watching the show with their own kids, and some young viewers are streaming the Tanner family for the first time. With so many viewers of varying Full House acumen, the show needed to relatable to all.

So, do you need to see Full House to best enjoy Fuller House? Not really. Because of the family-quality of the show, there aren’t really twists and thematic elements to catch between series. And, many of the sitcom circumstances that are paralleled on Fuller House are explained to viewers via reminiscing, and are sometimes over-explained. But, there are a lot of characters to keep track of and inside jokes. If you are a Full House newbie, here’s a field guide to the Tanner family to study before tuning into Fuller House.

Get The Family Tree Straight

My husband’s biggest source of confusion was, "Who was related to whom?" At one point on Fuller House, Kimmy Gibbler’s sexual prowess was fodder for a joke that Danny capped with an innocuous punchline. My husband was visibly creeped out and asked me, “Is that her dad?” We had to pause and walk through the family tree again.

Let’s Talk About The Actors

A lot of jokes on the show are nods to the actors’ other work. There are mentions of Candace Cameron Bure's work on The View and DWTS, John Stamos’ soap opera days, and the Olsen twins' fashion franchises, to name a few.

Otherwise a 35-year-old woman saying “How Rude!” is just confusing. Here are the phrases you should know: Stephanie's “How Rude,” Michelle's “You got it dude,” Jesse's “Have mercy,” and Joey's “Cut it out.”

We Need To Talk About Kimmy Gibbler

Think of her as a sort of female Steve Urkel. Yes, she is supposed to be obnoxious and intrusive. If I could think of one description for vintage Kimmy, it’s that she wore a light up dress (with a battery pack purse) to prom.

Danny is a neat freak, Jesse is obsessed with his hair, Steve eats a lot, and Kimmy is, well, Kimmy.

Know About The Cast IRL

Some people may wonder why a cast would do a reboot 29 years later. But, the Full House cast has stuck together. So, part of the new series’ charm is that it is a homecoming for the actors.

Oh, And Learn The Theme Song

It will be stuck in your head for decades.

Ok newbies, now you're ready to marathon Fuller House and enjoy it in all its '90s nostalgic glory.