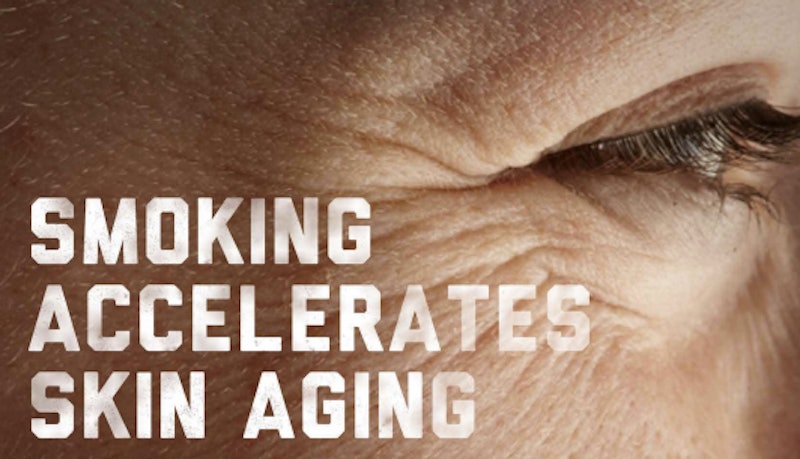 Teen selfie-takers take heed: the government is on to you. The FDA's new anti-smoking ad series, a sophisticated $115-million campaign aimed at 12- to 17-year-olds, is called "The Real Cost" and will use vanity to try to appeal to teens. The government agency is using photos of yellow teeth and wrinkles to scare youth away from the possibility of an unattractive portrait. The campaign hits the multimedia streets (MTV, Teen Vogue, and Facebook will all carry versions of the ads) on Feb. 11. It will target the more than 10 million kids the FDA says are at risk of smoking, as well as the 700 teens that become smokers each day.

The ads sound pretty graphic: "One of the videos features a girl trying to buy cigarettes at a convenience store," reports USA Today. "When a clerk tells her that she doesn't have enough money, the girl reluctantly scrapes off part of her cheek, revealing ugly wrinkles beneath, then hands her youthful skin to the clerk."

The FDA is going after kids using the same methods advertising agencies use.

"Our kids are the replacement customers for the addicted adult smokers who die or quit each day," said Mitch Zeller, the director of the FDA's Center for Tobacco Products. "And that's why we think it's so important to reach out to them — not to lecture them, not to throw statistics at them — but to reach them in a way that will get them to rethink their relationship with tobacco use."

The FDA's goal is to reduce teen smokers by 300,000 in three years. And, in a last, ironic twist: Tobacco companies are the ones footing the bill for this year-long campaign through user fees they have to pay to the FDA.