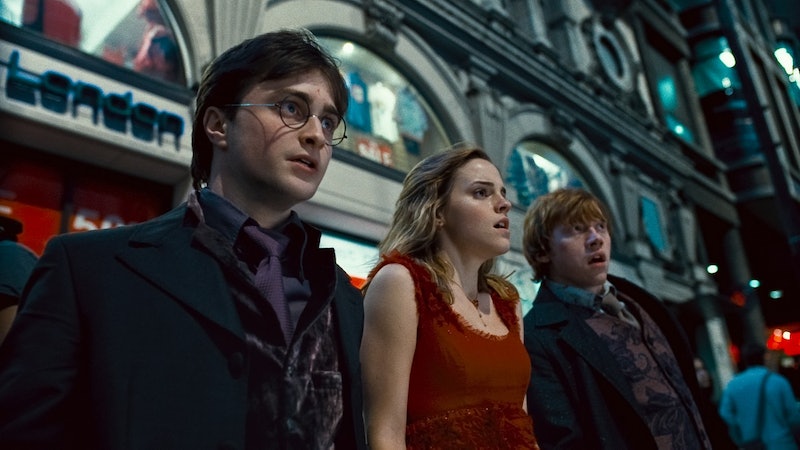 I like to quote the Harry Potter novels as often as humanly possible. It's pretty much my litmus test when it comes to meeting new people: can you pick up on my subtle and not-so-subtle Harry Potter references? If the answer is yes, you're probably someone I want to be around. If the answer is no... well, we really won't have anything to talk about anyway, now will we?

While I have my personal favorite go-to lines ("Just because you've got the emotional range of a teaspoon doesn't mean we all have"), I recognize that there are a ton of great lines throughout the series that deserve our attention. In fact, with seven books, thousands of pages, and millions of words in the entire series, it's almost impossible to pick out just a few stand-out lines. But I do like a challenge.

I've gone through the series and picked out some of the best quotes from a few of our favorite Harry Potter characters. While they all have a number of hilarious, thought-provoking, or sob-inducing quotes, in my personal opinion, these lines best sum up the character in some way. At the very least, they hold a special place in this reader's heart.

Is this a cop-out? Probably, but you can't tell me that Snape has a better line in the entire series. Seriously, not a single line better sums up his entire character. Also, no line is more likely to make me bawl my eyes out. Accio tissue, please.

"I hope you're pleased with yourselves. We could all have been killed - or worse, expelled."

I know she said this is in the very beginning of the series, but really, has a more Hermione line ever been uttered? Even though she loosens up somewhat towards the end of the novels, at heart she'll always be the same girl who's more afraid of being expelled than killed.

"Of course it is happening inside your head, Harry, but why on earth should that mean that it is not real?"

Dumbledore is insanely quotable, so picking just one line is tough. But personally, I think that this — Dumbledore's last line to Harry and to readers — will always be my favorite.

"I fashioned myself a new name, a name I knew wizards everywhere would one day fear to speak, when I had become the greatest sorcerer in the world!"

Voldemort, Harry Potter and the Chamber of Secrets

Technically, he was still Tom Riddle when he said this, but even teenage Voldemort was every bit as vicious and bloodthirsty as the one Harry would come to know. So if you thought your high school bully was bad, just think of what the students in Riddle's year had to deal with.

"NOT MY DAUGHTER, YOU BITCH."

"This is how it is — this is why you're not in the Order — you don't understand — there are things worth dying for!"

Sirius Black, Harry Potter and the Order of the Phoenix

Pretty sad foreshadowing, but this line also perfectly sums up Sirius's character and motivation throughout the novel. He was constantly willing to put his life on the line for the cause he believed in and the people he loved. If he had to die, at least he died exactly the way he would have wanted it: trying to save Harry.

"Give her hell from us, Peeves."

Fred Weasley, Harry Potter and the Order of the Phoenix

Only the Weasley twins would break out of Hogwarts on broomsticks, leaving a magical mess behind them. This line perfectly captures the fun and recklessness of the twins. Plus, it's pretty great to picture them charging an annoying poltergeist to bug the living hell out of the terrible Dolores Umbridge.

How many times have you daydreamed about Hagrid breaking down your door, handing you a birthday cake, and saying this to you? Every time I read this line I think about the very first time I read Harry Potter and began this journey with him, so I have a huge soft spot for this quote.

Luna Lovegood, Harry Potter and the Order of the Phoenix

Oh, loony Luna. Maybe this line wasn't too comforting to Harry at the time, but as the series went on, getting compared to Luna stopped being such a bad thing. Sure, she's a bit of an oddball, but in the very best way possible.

"I'll join you when hell freezes over. Dumbledore's Army!"

Neville Longbottom went from being a forgetful little boy to a sexy, rebellious man in just one line. Neville had been slowly coming into his own during the entire series, but it's not until his final showdown with Voldemort that we really get to see the new, glorious Neville in full force.

Such a typical Ron line: he'll curse and moan and complain, but at the end of the day he'll do pretty much any crazy stunt Harry asks of him. Although I can't really blame him for not being too pleased about risking his life for the likes of Malfoy, Crabbe, and Goyle. Those guys are the worst.

"I see myself shaking hands with Dumbledore. I — I've won the house cup for Gryffindor."

I don't know if I would love this line as much if it wasn't for all of the memes and Twitter posts about it. But now that those exist and I can't un-see them, this is probably my favorite line spoken by our hero in the entire series. Yeah, he has some heartfelt moments and inspiring speeches, but the Internet has spoken: this is his best line.