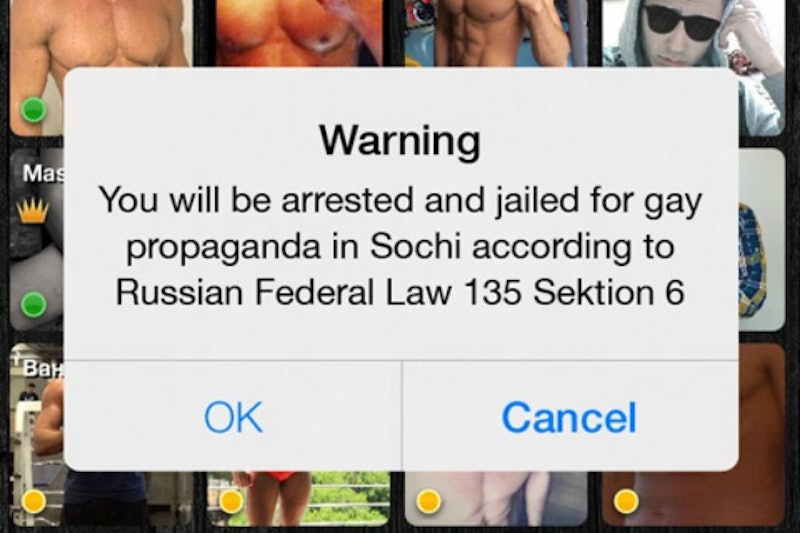 The Olympics may be kicking off in a few days, but all is not well in Sochi. Russia’s anti-gay “propaganda” laws have been a major source of controversy ever since the city was announced as the venue for the 2014 Winter Games — and things just got scarier: A Grindr-esque Russian hookup app called Hunters was recently hacked, and its users are being threatened with arrests and jail.

Hunters CEO Dmitry T. (he requested his last name be held for security reasons) contacted the website Towleroad informing them of the hack; here’s what we know so far:

On February 1, 2014 at 11:52pm, all Hunters users in Russia, including those in Sochi, received the following message on the app: “You will be arrested and jailed for gay propaganda in Sochi according to Russian Federal Law #135 Sektion 6.” The following morning, users trying to open the app in Sochi encountered an alert saying that their profile was blocked for the next 38 days. Hunters’ team went immediately to work attempting to restore the lost profiles; they were able to retrieve about 24 percent of them after 12 hours, but the remaining 76 percent — about 72,000 profiles — were unfixable.

Here’s the scariest thing: Dmitry believes the hack to have come directly from the Russian government. He wrote to Towleroad:

“It looks like the Russian Government decided to take full control of the Internet and implement Turkish practices where Grindr has been banned for almost half a year. I think that this attack is connected to increasing censorship of the Internet and very soon other gay dating resources in Russia will face similar problems.”

It hasn’t yet been confirmed where the attack came from, but if Dmitry is right? Yikes. And even if he’s not right? Still yikes.

In order to protect their users, Dmitry and his team are in the process of moving their servers from Russia to Europe; they’re expecting to complete the process within the next few days, but it’s possible that more disruptions will pop up in the intervening time. Dmitry stated, “This attack should be looked at as an attack on the worldwide gay community with the goal of blocking any gay interactions during the Winter Games in Sochi, including those between athletes and locals.” He urged the gay community, as well as “all of those who consider the Internet to be a free zone,” to boycott Russian vodka and all things linked to the Olympics.