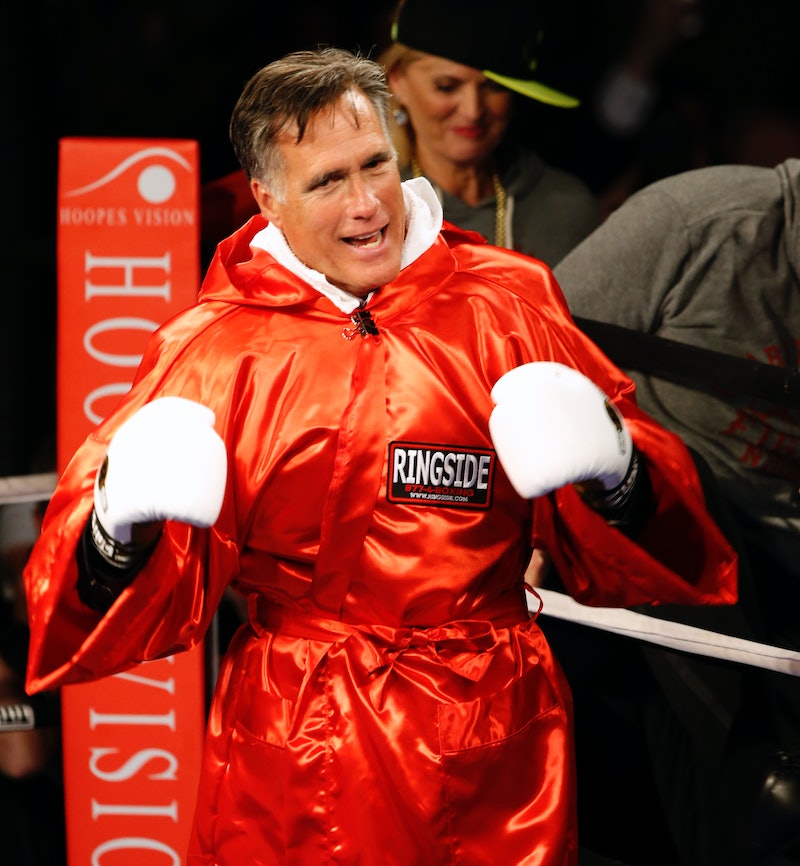 Although it was hardly the first time he has criticized the GOP front-runner, Mitt Romney slammed Donald Trump harder than ever on Thursday, imploring Republicans across the country to rally against him. Speaking at the University of Utah, Romney added to the anti-Trump campaign, which the Republican establishment has largely united behind in recent weeks. Romney went in full attack mode against Trump, even throwing in a few zingers — an uncharacteristically colorful move for the usually bland former governor of Massachusetts.

Trump said that if Republicans choose Trump as their nominee, "our prospects for a prosperous future is greatly diminished." He called out Trump for his professed admiration of Vladimir Putin but criticism of George W. Bush, saying it was an example of "evil trumping good."

However, the most memorable Romney line was arguably, "Donald Trump is a phony, a fraud. His promises are as worthless as a degree from Trump University." He followed this with the kicker that Trump was "playing the American public for suckers. He gets a free ride to the White House, and all we get is a lousy hat." Boom. Drop the mic, Mitt.

When it comes to foreign policy, Romney said that Trump is "very, very not smart." He also slammed Trump's alleged financial acumen. "A business genius he is not," he said, citing Trump University along with his failed lines of steaks and vodka.

Of course, the problem with the attacks Romney and many others have made against The Donald is that he then uses it as fuel for a further spectacle and to crown himself a "winner" yet again. Before Romney even spoke, Trump was already on a Twitter blast against the 2012 Republican presidential nominee. Trump had plenty in his arsenal to counter Romney's attacks, perhaps the most incriminating one being that Romney accepted his endorsement when he ran for president.

However, Romney also anticipated this response, and used it argue that Trump didn't have the temperament to be president. "Watch how he responds to my speech today," he said, predicting that Trump would "attack me with every low-road insult." Romney added that "attacking me won't prove he is any less of a phony."

Romney made the "anybody but Trump" message crystal clear, stating upfront that he was not endorsing any of the Republican candidates and professing that Marco Rubio, Ted Cruz, and John Kasich all had "serious policy proposals." He was just as emphatic that Republicans should not be tempted by Hillary Clinton, even in the midst of Trump's rise. He said that during Clinton's tenure as secretary of state, "America's interests were diminished in every corner of the world," and that "a person so untrustworthy and dishonest as Hillary Clinton must not become president." Still, Romney used his anti-Clinton argument to further his larger anti-Trump message, citing polls which predict that Trump would lose a general election to her. Romney warned that "a Trump nomination enables her victory."