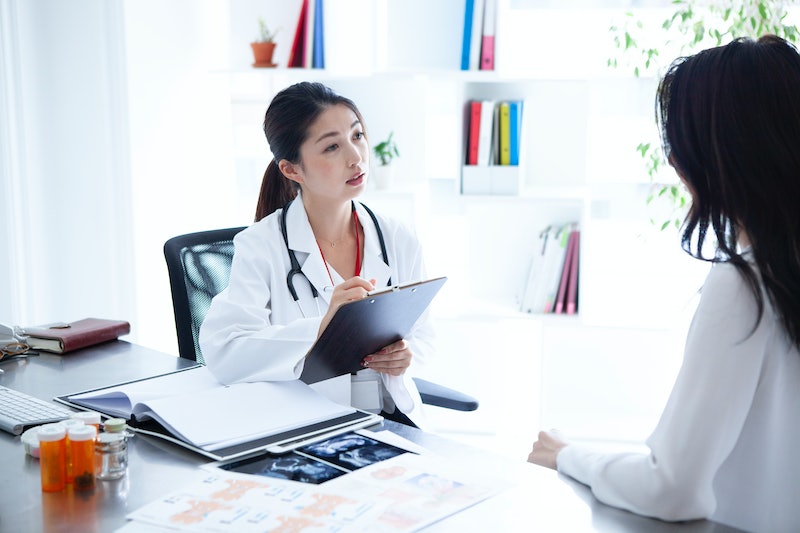 You may be surprised to know that a "fertility test" is actually not one test: it's a variety of different tests, many offered in various arrangements, all geared towards examining your possibility of conceiving, and targeted at different parts of your reproductive system and cycle. In other words, it'll make you cross-eyed. If you pop along to your GP and say "I'd like to check how fertile I am, please!", they're likely to give you a look between frustration and shock, and ask you to consider just how much blood, fluid, time, and money you're willing to expend, particularly if you're not actually considering starting an army of mini-me kids juuust yet.

The fertility tests you can buy in drugstores only focus on one particular aspect or demonstration of fertility, normally hormonal. But there are many other tests that can be taken to investigate your body's willingness to take on a baby, and how successful any attempt at a pregnancy is likely to be. Many are only really recommended if you've tried and failed to produce a pregnancy for a year, and are in serious detective mode about your baby-making capabilities. And there are many fertility tests that can be done on men, too; rest assured you won't be the only one being poked and prodded.

So here are the main tests of fertility, some of which can be administered in the office of your local doctor, others that need a significant afternoon or overnight stay at a hospital. Hey, the reproductive system is complicated.

One thing that can make conception seriously difficult is a chlamydia diagnosis in women, since it's known to cause issues with becoming pregnant. Chlamydia is frequently asymptomatic, meaning it never shows any signs, but it causes infertility by damaging the uterus and fallopian tubes and causing pelvic inflammatory disease. It's also a known factor in the traumatic experience known as ectopic pregnancy, where the egg implants outside the womb.

Testing for chlamydia, as you'll know if you've ever had it checked while having a full STD sweep, often involves a urine sample, which is sent off to be examined for traces of chlamydia DNA. It can be done pretty easily by a GP or sexual health specialist.

There are multiple blood tests that can be done at various points in your cycle to pinpoint fertility issues, and they tend to detect different things. One is an ovulation detector that checks the levels of progesterone, a hormone, in your blood in the period when you're supposed to be producing eggs (up to seven days before the start of your period); another is taken very early in your cycle (during your period) to measure the levels of luteinising hormone and follicle stimulating hormone in your blood, both of which are associated with fertility. And the doctor may check your luteinising hormone levels at other points in your cycle, to see how it's fluctuating.

Be prepared to give up a bunch of vials, is what I"m saying.

You may be offered a transvaginal ultrasound scan, where they scan your fallopian tubes and uterus to see if there's anything there that might produce disruptions in effective baby-making. The way it works? They insert a tiny probe via the vagina to check out what's happening, use it to emit small signals that "bounce off" the bits they're interested in, and view them on a screen to check for abnormalities.

In some cases, usually if they've spotted something that needs further investigation, they'll do a saline infusion sonohysterography, which sounds like some kind of Latin nightmare but is actually pretty simple: they put saline into the uterus via a catheter and it helps it show up more clearly on the ultrasound screen.

This one's made a few headlines as it becomes more common to do "at home" (or at least put things in a bag and send them off to be tested by a private firm, without consulting a GP or specialist). It's a very specific test used to see how many eggs you're producing with each ovulation, and is compulsory before IVF.

AMH stands for Anti-Müllerian hormone, which is present at differing levels in the female body during our lives and corresponds with the amount of eggs we have left (or our "ovarian reserve"), which dwindles as we get older. AMH levels can be tested to see our egg status, and the range it puts us in indicates how many eggs we might have left before menopause.

Hurrah for complicated names! "I'm just off for a hysterosalpingography" sounds a lot fancier than "I'm off to have dye injected into my womb and fallopian tubes so they show up on X-rays", but that's essentially what it is. (Sorry to spoil the mystery.)

This sort of testing is used to see if there are any blockages or worries in the tubes that might prevent the dye (technically called a "contrast agent") from passing through. The dye makes things in the reproductive system more intelligible to X-rays. If they detect something in the way, that'll likely impair your ability to get preggers.

If the signs of other tests indicate a difficulty, or if there's something they wish to explore, doctors may suggest a laparoscopy, where a small camera is inserted through a tiny hole in your abdomen and used to probe your fallopian tubes, uterus, and womb.

And then there's genetic testing, which is only usually given to couples who are experiencing severe infertility issues to find out where the problem might be coming from. "Genetic tests are now available to explore the cause of the infertility and assess the risk of a given couple to transmit its genetic characteristics," the European Journal Of Human Genetics reported back in 2002. "This allows at-risk couples to take an informed decision when electing for a medically assisted reproduction." This will normally be done on both partners, according to the Mayo Clinic, and is administered via blood test.

Basically, the journey to truly figure out your fertility may turn out to be a long, winding, and kind of painful one. I wish you luck with having dye and saline flushed into your bits, guys.