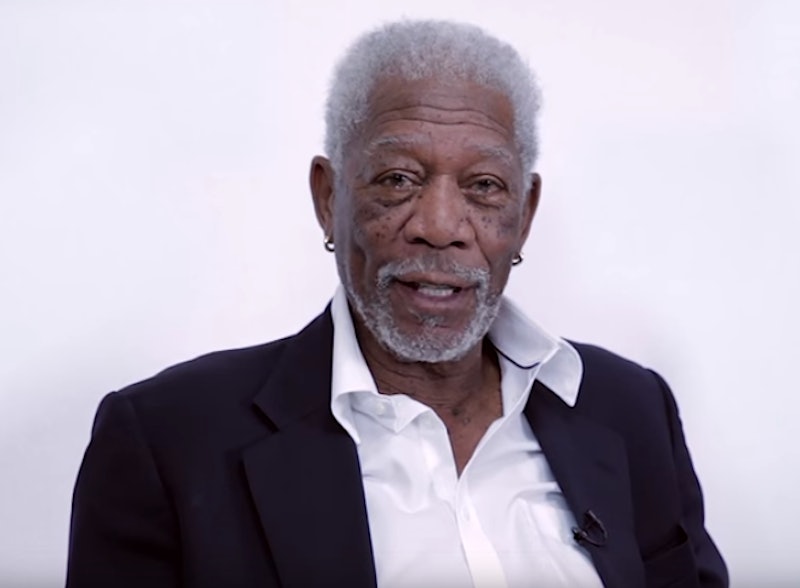 I didn't think it was possible for Morgan Freeman to gain any more of my respect, but I was wrong — so very wrong. In the spirit of the latest trend where celebrities do dramatic readings of popular songs on video (yes, that's a thing), Vanity Fair has added to the mix with what may be the greatest of them all: On Thursday, they released a video of Morgan Freeman performing Justin Bieber's "Love Yourself" — in the style of a dramatic reading. The video was part of the promotion for Freeman's latest flick, London Has Fallen, and yes, it is as amazing as you would think it would be. Maybe more so, actually, because let's be honest, Freeman dramatically reading anything is a win.

Personally, I find the lyrics of "Love Yourself" to sound exactly like they were a role specifically created for Freeman. He makes the lyrics of this song way more intense with just a single glance at the camera, or by emphasizing certain, sometimes overlooked lyrics. Even though the original is a pop song and this is more of a spoken word piece, it still begs the question: Who did it better? Well, even though I have love for both Bieber and Freeman and this one is a pretty close tie, at the end of the day, there must always be a winner.

So, here is the definitive breakdown of who did it better.

Bieber's new album Purpose has been off the charts amazing. He came out strong this year, with a different sound, vibe, and all-around attitude. This is one of those songs that so many people can relate to and enjoy, and it shows through in every note he sings. Obviously, there is a lot to be said about the original always being better, but I'm not sure I feel that way in this case. It could also have to do with the fact that — no offense to the video, which is very well produced — I can't see Bieber singing in the video.

This performance was spot on for me. Freeman had the perfect inflection, the right timing, and it's basically like he's been reading the lyrics to pop songs dramatically for years. I believed every word that came out of his mouth, and more importantly, I almost forgot it was a song he was reading.

Welp, I'm afraid Freeman outdid Bieber at his own song. Don't get me wrong, I would listen to the original all day too — but in the end, it just doesn't compare to hearing Freeman speak the words into my soul.

More like this
Selena Gomez Is Fine Being Single, But She Still Manifested Romance On 'SNL'
By Martha Sorren, Jake Viswanath and Jack Irvin
Zooey Deschanel Can't Be Anyone But Herself
By Samantha Leach
Sadie Sink Would Escape Vecna From 'Stranger Things' With This Taylor Swift Song
By Grace Wehniainen
Kanye Joked About His Divorce To Kim K In A Surprise Speech At The BET Awards
By Alyssa Lapid
Get Even More From Bustle — Sign Up For The Newsletter