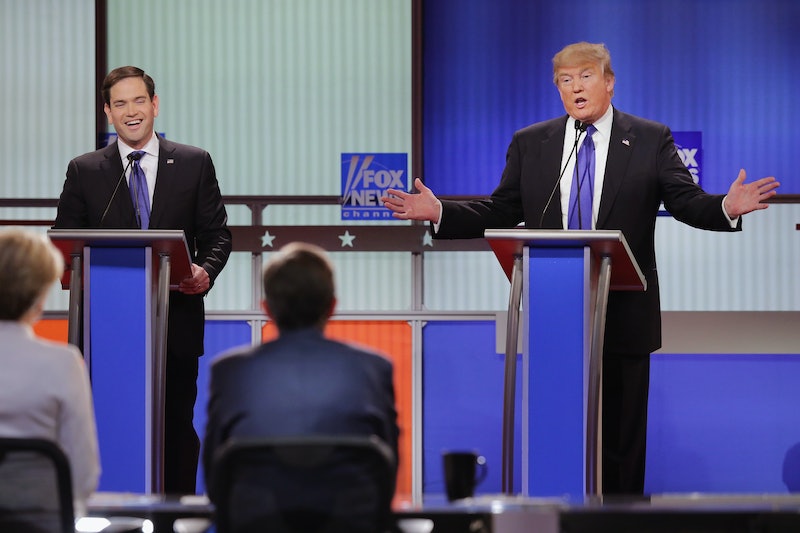 Well, the Republican primary has literally devolved into a dick-measuring contest. Within 10 minutes of the 11th Republican debate, Donald Trump assured the audience that he has a big penis, and even by the already-shameful standards of this Republican primary, that's a new level of immaturity and petulance. Not surprisingly, Donald Trump penis jokes immediately dominated Twitter within seconds of Trump making the remark.

Yes, there was some context to Trump's comment. But really, do you need to know it? Because make no mistake, the biggest, and only, story here is that the Republican front-runner for president just bragged about how big his genitals are on stage at a nationally-televised debate. I'm no historian, but I'm going to go out on a limb here and say that hasn't happened before. In all honesty, my brain is still processing the fact that this did, indeed, happen.

The sad thing is that really, this is just the logical extreme of the kind of campaign Trump and the rest of the Republicans have been running the whole cycle. The good news, though, is that Twitter is a funny place, and it immediately got to work giving some much-needed perspective on Trump's Neanderthal boasting, which was certainly more suited for an adolescent schoolboy than a presidential candidate.

We live in a very polarized political environment, and it's often hard for partisans to find agreement on anything. But Trump's penis joke has brought us together, and for that, we should thank him. Except not, because, I mean, come on.