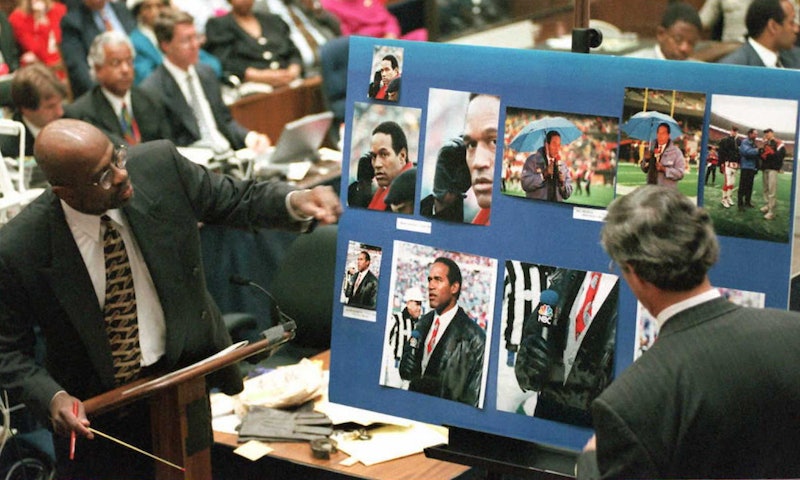 The LAPD has allegedly launched an investigation after finding a buried knife at O.J. Simpson's estate, TMZ claimed Friday. According to the report, a construction worker first found the knife anywhere from "several years ago" to as early as 1998 when the house was being demolished. This would be a big break in the case, considering that the murder weapon was never found during the initial investigation. Update: According to the Washington Post, the LAPD has confirmed the story about the knife found at Simpson's Brentwood estate stating, "We need to determine if it’s evidence."

The weapon — a folding buck knife — was allegedly handed over by the construction worker to a nearby off-duty LAPD cop who was working security for a movie shoot across the street from the estate. According to TMZ, the officer — who worked in the traffic division — took the knife home and kept it without ever turning it in or reporting it.

It wasn't until January 2016 when the officer retired that he allegedly contacted a friend who worked in the Robbery Homicide Division to tell them what happened, according to TMZ. The cop allegedly wanted to frame the knife, and asked this friend to find the Departmental Record number for the original murder case which he hoped to have engraved in the frame.

According to TMZ, the officer in RHD told his superiors, who insisted the weapon be returned and investigated. The folding buck knife is now allegedly being tested for hair, blood, and fingerprints after being transferred to the LAPD's Serology Unit, TMZ reports.

This would not be the first time in recent years that stories about the missing murder weapon have resurfaced. In 2014, Fred Goldman — the father of the victim Ron Goldman — spoke with Daily Mail in an interview, and told them he believed that the late Robert Kardashian hid the murder weapon back in 1994. Kardashian was seen leaving Simpson's estate with a suitcase the day after the murder, but Kardashian and his family have always denied being involved in any way.

Ron Goldman's sister Kim Goldman said in a separate interview, "I have always wondered what was in his luggage bag, and if it did indeed hold the murder weapon that was used to kill my brother and Nicole." The bag had been emptied by the time it was entered into evidence.

While this new information regarding the buried knife at the Simpson estate is allegedly under investigation, regardless of what they find, O.J. Simpson cannot be prosecuted again, thanks to double jeopardy laws under the Fifth Amendment.