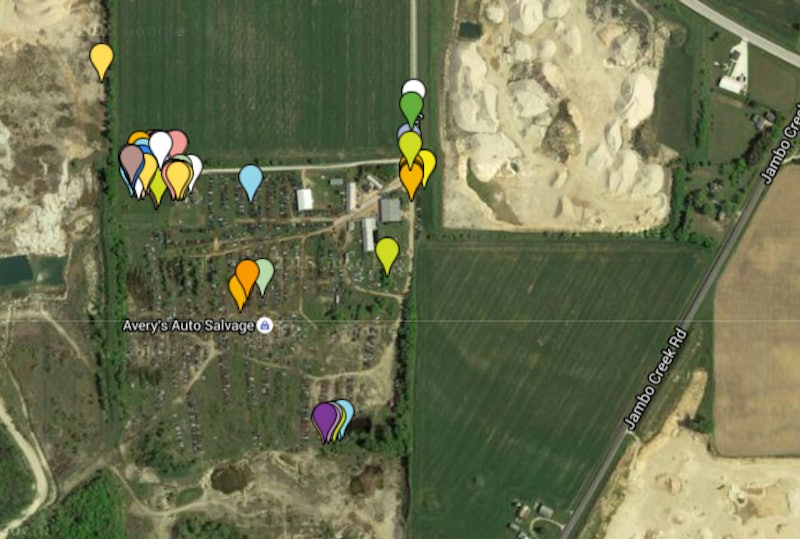 From extensive Reddit threads to this new "Remaking A Murderer" interactive map, many viewers of the hit Netflix docuseries have been obsessively tracking locations, photos, and evidence from the case in chronological order. The creators of the "Remaking a Murderer" collaborative map, Hugo García and Paola Falero, who work at the digital marketing and communications company Ogilvy, and Mather Bogotá, said, "We took all the information that people are publishing on Reddit about the case of Steven Avery and organized it in an interactive and collaborative map on Google maps," according to Laughing Squid.

The hit series Making A Murderer follows the story of Steven Avery from Manitowoc, Wisconsin, who spent two decades in prison on a sexual assault charge in 1985 before DNA evidence proved his innocence of that crime. After his release in 2003, Avery filed a $36 million lawsuit against the county. Four years after his release in 2007, he was then sentenced to decades behind bars for the murder of 25-year-old Teresa Halbach, a photographer who went to Avery's residence to photograph his sister's minivan for a sales ad. The map tracks the case starting from Nov. 1, 2005 when Halbach heads to the Avery residence, and ending in August 2007 with the sentencing of Avery's nephew Brendan Dassey, who confessed (under duress) to helping Avery in Halbach's murder.

So far, García and Falero's interactive map has received upwards of 14,000 views and goes into extensive detail about dates, locations, potential alternate locations, and all phone calls, and is organized by theme. For instance, Nov. 1 to Nov. 3, 2005, called "Where is Teresa?" includes important details asking where she is, noting when she didn't show up for work, and where her car was found.

The information in the map is based on what people are posting on Reddit — from fan theories to discussions — including facts about the case, such as specific locations and photos of the evidence. According to Laughing Squid, the map gives individuals the option to add new facts or content "that can help people [make] their own conclusions."

Here's a closer look at the collaborative project.

The map starts on Oct. 31, 2005 documenting Teresa's calls to her voicemail and five unknown incoming calls made to her phone. It maps out her potential alternate locations, such as where she may have been at 2:12 p.m. when she calls the George Zipperer residence, when she receives a blocked call from Avery at 2:24 p.m., and a 2:30 p.m. arrival time at Avery's.

The map continues with documentation of Nov. 1 to Nov. 3, 2005, when Teresa doesn't show up to work. This section maps out a phone call from Halbach's ex-boyfriend, who finds it strange that she didn't pick up and that her voicemail box was full. On Nov. 3, she is reported missing and her car is found in a gravel pit. Her brother is later able to access her voicemail and listens to her 18 missed messages, according to information provided in the map.

The Last Man To See Her Alive

The map then takes us to Nov. 4, 2005, when helicopters fly over the Avery lot taking photos. The police search for Halbach starts, her siblings are interviewed, and her ex-boyfriend Ryan Hillegas leads his own search outside the Avery property. By the end of the day, it is known to the general public that she was last seen at the Avery residence.

The map continues, taking viewers through November's search for Halbach, to Avery's arrest on Nov. 9, through his sentencing on June 1, 2007.

The Case Is Still Ongoing

On Nov. 9, Avery is arrested for possession of a firearm. A .22 caliber semi-automatic rifle was found in his trailer three days earlier, according to the map.

On Nov. 15, Avery is charged with murder, although he maintains his innocence to this day.

The map takes us all through 2006 starting from when Avery pleads not guilty in mid-January.

In April, the police find evidence in Halbach's vehicle, after swabbing the hood of her car.

In December 2006, Avery's lawyers find an unsealed vial of his blood from 11 years earlier. His lawyers suggested that Avery's blood — which was found in Halbach's car — was planted there and had been taken from the unsecured vial. The jury on Avery's case didn't buy it.

The map takes us through 2006 and into 2007. On June 1, Avery is sentenced to life in prison without parole.

His nephew, Brendan Dassey, is sentenced on Aug. 2. to life in prison with eligibility for parole after serving 41 years.

See more for yourself by visiting the map below.

More like this
A New Netflix Doc Will Explore The Unsolved Murder Of Jill Dando
By Sam Ramsden
This First Look At 'The Gold' Shows Jack Lowden In A Whole New Light
By El Hunt and Sam Ramsden
A Teen Murder Victim's Horrific Diary Entry Helped Police Find Her Killer
By Brad Witter
The 3 Best Heated Steering Wheel Covers
By Margeaux Baulch Klein
Get Even More From Bustle — Sign Up For The Newsletter
From hair trends to relationship advice, our daily newsletter has everything you need to sound like a person who’s on TikTok, even if you aren’t.