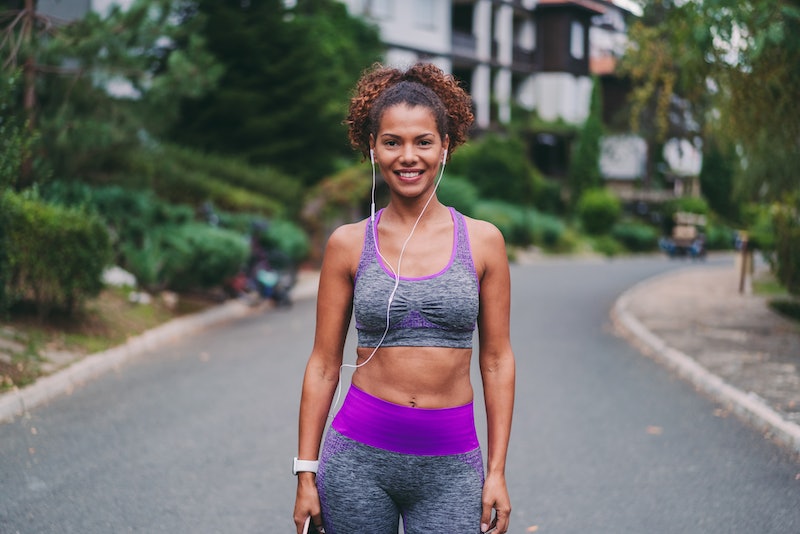 Working out isn't always fun — it takes time, commitment, and a willingness to inflict a lot of pain on ourselves (I'm looking at you, Stair Master). It's why when we actually commit to exercise we generally want to be sure we're getting the most out of our workout and haven't just wasted an hour of our lives that we could have been watching The Bachelor on our couch.

And since most of us are pretty busy and don't always have an hour and a half to commit to the gym every day, finding ways to make our workouts as efficient and productive as possible is generally super helpful. As someone who has belonged to gyms off and on over the past decade, as well as sometimes opted for classes over working out on my own, I can tell you that a productive workout definitely isn't always correlated to how much time put in, but is definitely related to how focused I feel, as well as certain factors leading up to the workout, like what I'd eaten that day or how much sleep I'd gotten.

If you want to start incorporating more exercise into your life, but also are genuinely unsure how you can make the time for it, here are nine hacks for a super efficient workout.

1. Leave Your Phone At Home

According to exercise Physiologist Holly Nunan in a piece for Upcoming Health, one of the biggest mistakes she sees is people at the gym who are overly attached to their cell phones. "I see a ton of people texting, on social media, and delaying their workout by sitting on their phone," she said. "What happens if you only have one hour to get your exercises in and spent a quarter of it on your phone? Are you just going to leave out that part of your routine? Leave the phone at home, and focus on your workout to get it done - especially if you’re pressed for time." And if you're like me and absolutely need music to work out, invest in a smaller, music-only device especially for your workouts.

Nunan also noted the importance of fueling your body with the right foods before working out to have maximum energy for when you need it (because slowly walking on a treadmill because you're too hungry to actually push yourself is good for no one). According to a piece for Muscle & Fitness, studies have shown that consuming complex carbohydrates, like sweet potatoes or whole grains, had more energy and burned more fat than participants who ate quickly-digesting carbs, like bagels ad sugary drinks.

According to fitness expert and athlete Diana Rini, compound exercises — or exercise that work on more than one area of your body at a time — are by for the most efficient use of your time. "It is possible to get a superior workout without spending hours in the gym," she wrote. "The key is in learning how to build a program composed of compound exercises. Compound exercises can help you make the most of your time [...] and provide you with a powerful workout for a fraction of the time!"

According to fitness writer Charlotte Hilton Andersen in a piece for Self, "high-intensity interval training (HIIT) describes any workout that alternates between intense bursts of activity and fixed periods of less-intense activity or even complete rest." She noted that HITT is ideal for those of us who are short on time, as studies have shown that you can get more out of a 15-minute high intensity routine than you can get out of an entire hour of light jogging. That's pretty awesome!

According to Life Fitness, merely walking on an incline instead of on a flat surface dramatically increases the efficiency of your workout. In fact, they noted that a study out of the University of Colorado found that "using a 9 degree treadmill incline, hamstrings displayed 635 percent of the muscular activity of level walking, and it increased glute activity up by 345 percent." The piece noted, however, to pay attention to form when walking on an incline — especially when on a treadmill (i.e. keep your torso upright and don't lean on the bars).

According to Jacob Wilson, Ph.D, in a piece for Motto, “If you just do cardio, you’re sabotaging yourself." He instead stressed the importance of weight and resistance training, as it builds muscle, which decreases fat and increases your metabolism in the long run. And if you're worried about bulking up, don't be! According to celebrity trainer Harley Pasternak, women simply do not have the testosterone levels to get giant-looking muscles, and instead you'll only notice how strong and toned you feel.

7. Listen To Music After

That same Motto piece noted that Indian Journal of Physiology and Pharmacology found that people who listened to relaxing music after an intense work out actually recovered faster, making them more able to push themselves again the next day. Certified strength and conditioning specialist Holly Perkins said this is likely because “music boosts the body’s levels of serotonin and dopamine, hormones that are known to foster recovery."

A piece for Muscle & Fitness Jim Steffani, Ph.D noted that studies have shown that imbibing caffeine — in either a drink or a supplement — one to two hours before a workout markedly increases your overall workout efficiency, as it "increases fat-burning and endurance and blunts muscle pain during training, which means you can do more reps." So, Starbuck anyone?

9. Do Cardio After Weights

Steffanie also recommended always starting your workout with weight and resistance training, as opposed to doing it after cardio. He noted that the energy you expend on cardio will typically reduce the amount of sets you can do, which means you won't end up reaping maximum benefits.

Let's be real — working out is often a chore. So when we do actually get ourselves to the gym, it only makes sense that we ensure we're making the most of our time. Plus, a more efficient workout generally means more time to do the things we actually want to be doing, and who doesn't love that?

More like this
The Best Summer Workout Gear Of 2022
By Carolyn Steber
What Forest Bathing Is & Its Benefits, Explained
By Carolyn Steber
11 Neck Exercises That'll Help Relieve Tension
By Carolyn Steber
Jennifer Aniston Can’t Get Enough Of Pilates Right Now
By Alexis Morillo
Get Even More From Bustle — Sign Up For The Newsletter