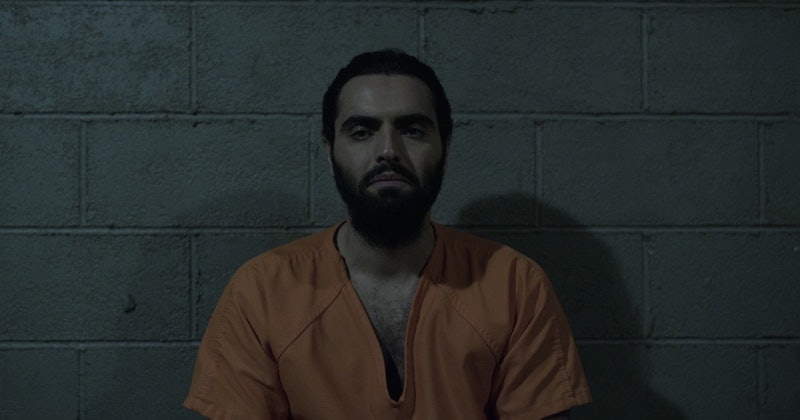 In the second half of House of Cards Season 4 (major spoilers ahead for the finale), we were introduced to Yusuf Al Ahmadi, played by Farshad Farahat. The Argo actor portrayed the leader of ICO, the House of Cards version of ISIS, and was just as terrifying as you'd imagine. We first met Yusuf when he was transported from Guantanamo Bay to a safe house in Virginia per a request made by Claire Underwood. An American family was kidnapped by members of ICO, and Claire was hoping Yusuf would speak to the extremists and get them to release the hostages. He agreed, but used his video conference with the extremists to encourage them instead. But, who is Yusuf Al Ahmadi and is he based on the real ISIS leader? Netflix declined to comment when asked about the similarities.

It's possible Yusuf was inspired by ISIS leader Abu Bakr al-Baghdadi as their role is seemingly the same. But, not much is really known about either man to compare them. The ISIS leader keeps an air of mystery, and we only met HoC's Yusuf in the finale. However, in addition to leading an extremist organization and encouraging violence, often against innocent citizens, both men are reportedly very smart. Claire calls Yusuf a well-educated man, and, according to The Independent, ISIS leader "Al-Baghdadi is believed to hold an undergraduate degree, masters and PhD from the Islamic University in Baghdad."

The two also share a sexist worldview. ISIS created a caliphate in 2014 with a set of rules including one forbidding women from going outside unless necessary, according to The Washington Post. In House of Cards, Yusuf told Claire she humiliated him by forcing him to "[sit] across from a woman."

It was pretty timely for House of Cards to introduce a terror group to the show, and it was very hard to watch everything unfold. ICO pulled from the very real ISIS several times, including broadcasting a video of a decapitation of their remaining hostage when Frank refused to release Yusuf. ISIS did a similar thing with Steven Sotloff in 2014. Unlike Claire and Frank did, you shouldn't watch the video. (That link doesn't include the video, and instead includes excerpts of Sotloff's work, which he deserves to be remembered for.)

But, even in the face of terrorism, Frank and Claire were undeterred. In the final moments of Season 4, Frank uttered this commanding sentence: "We don't submit to terror. We make the terror." That, in itself, isn't exactly the right thinking either, in my opinion, but it's very in-line with his general attitude.

Season 4 of House of Cards was definitely dark and, at times, hard to stomach, especially knowing that some of the events they portrayed are all too real.