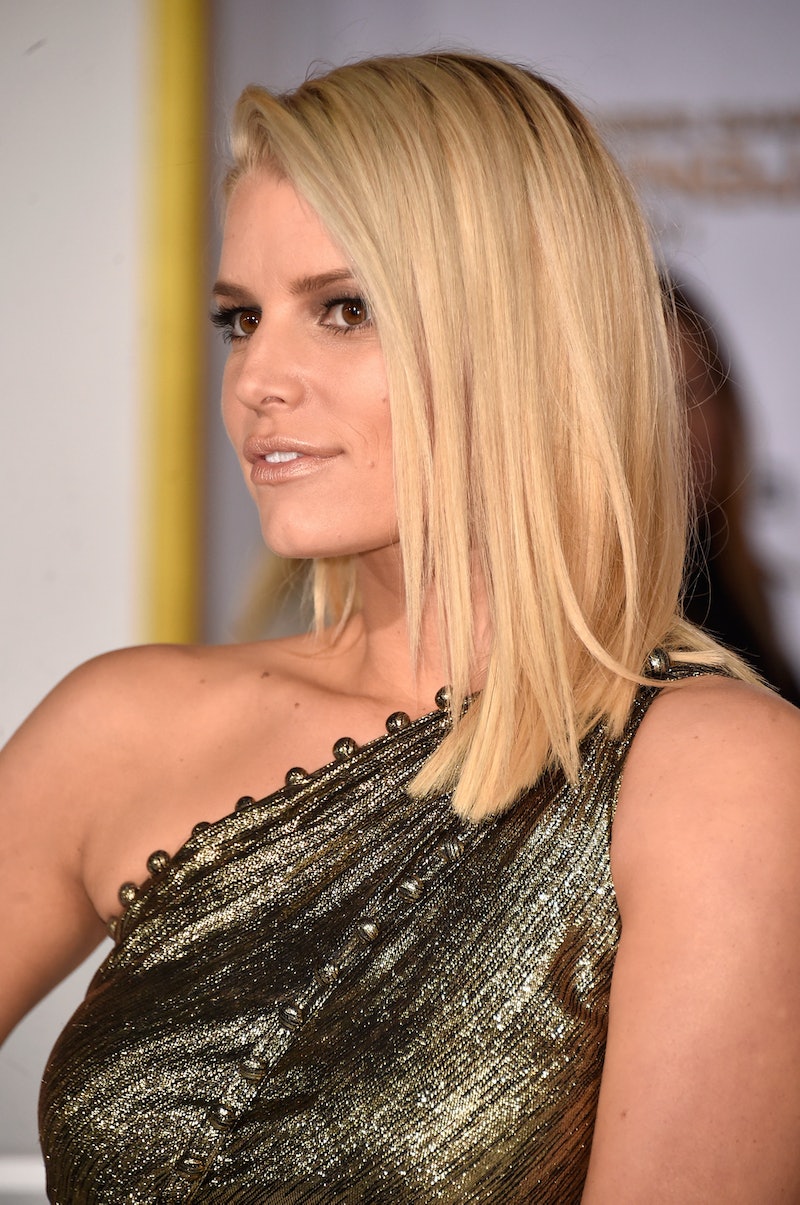 Losing your virginity is an extremely personal thing, whether you're an average Joe or a celeb who can't walk down the street without being mobbed by paparazzi. And while it may seem like Hollywood is just saturated with sex — it's everywhere from movies to music videos to stars on Instagram — there are actually a significant number of celebs who waited to do the deed for the first time. Whether that means they waited (or are waiting) until marriage, waiting until they're older, or just plain ol' waiting until they felt comfortable and the moment was right, there are a fair number of stars who have been open about their virginity — and choosing to lose it when they did.

Of course, this is not to shame anyone (celebs or normies) who had sex before marriage or when they were younger — it's a super subjective, personal decision. But in an entertainment industry that is so often focused on sex appeal, it's interesting that there are many stars out there who have not only decided to wait, but have been so vocal about that choice in the press.

Check out celebs who have spoken out about waiting to lose their virginity.

Jessica Simpson famously waited until her wedding night to have sex for the first time, as she told Blender magazine (via Popdirt) in 2003. "It was the most amazing moment of my life," she said of sleeping with then-hubby Nick Lachey on their wedding night. "I’m so lucky I didn’t lose my virginity in the back of a Jeep or something. Instead, I had this amazing, elaborate wedding and I topped it off with that."

Adriana Lima explained that she was a devout Catholic and was waiting until marriage in a GQ interview in 2006. "They have to respect that this is my choice," she said of men she dates. "If there’s no respect, that means they don’t want me."

In 2009, Lima married basketball player Marko Jaric, and the couple, who have since separated, are the parents of two daughters.

Enrique Iglesias has been vocal about losing his virginity — only his story was pretty confusing.

"I grew up with a lot of my friends and all of them lost their virginity with hookers, not that there’s anything wrong with that ... "They had to pay for it. I wanted to wait for the right girl so I waited until I was 25," the singer revealed during a bizarre concert in Australia, during which he also revealed that he has a tiny penis.

Only here's the thing: He quickly backtracked and said he lost it much earlier. "Let me be honest, I was 17-and-a-half, I was so nervous. It lasted 10 seconds."

What's the real answer? It looks like we may never know.

Remember when the Jonas Brothers all wore their purity rings? While Joe and Nick each decided to have sex before marriage, Kevin waited until his wedding night to do the deed with his wife Danielle.

Tina Fey waited until she was 24 to have sex for the first time. (The lucky guy was her future husband, Jeff Richmond.) She jokingly told David Letterman that she "couldn't give it away."

Zac Hanson couldn't have been more uncomfortable when discussing the details of his sex life with Howard Stern in 2007. Though he and his brothers remained true gentleman throughout the intrusive interview, the host managed to get out of him that he waited until he was married to wife Kate Tucker to have sex for the first time.

"Everybody’s got their own preference. I’m not telling everybody, 'Don’t have premarital sex,'" he told the host. "I’m just saying, I didn’t. And that seemed like the right thing to do for me."

In 2009, quarterback Tim Tebow revealed during a press conference that he was a virgin and was choosing to wait until he was married to have sex.

"Yes, I am [waiting until marriage]," Tebow said at the time (quote via the Christian Post). "I think you're stunned right now. You can't even ask a question … I was ready for that question, but I don't think y'all were."

The former Sister, Sister star told Hot 97 that she waited until she was 29 to have sex for the first time.

"I don't know how to explain this, but I'm religious... So I waited 'til I was 29 to lose my virginity," she said. "And then — you may not understand this — I did it and then I felt guilty, and then I became celibate until I got married."

For someone who was so sexualized in the media at such a young age, Brooke Shields waited until she was 22 to lose her virginity to actor Dean Cain. As Shields recalled in her memoir (quote via Us Weekly), she immediately felt guilty about the whole thing:

"It should have been what I had wished for myself, but in an instant, guilt slapped me in the face. I got so overwhelmed that I jumped out of my bed… I was buck naked, streaking down a hallway and running as if I had just stolen someone’s wallet," she recalled of the moment at Princeton University.

As for Cain's thoughts on the matter, he told Kathie Lee and Hoda Kotb: "I don't think a girl loses her virginity," he said later. "They give it... I mean, we were in love. She was a wonderful girl."

Kathie Lee Gifford remained a virgin until her first marriage to Paul Johnson and didn't realize they weren't sexually compatible until after their wedding night.

"It was, like, YABBA-DABBA-DOO! I lost every inhibition I'd ever had. It was time for candles and romance, time to boogie and swing from the chandeliers," she wrote in her 1992 autobiography (quote via People). "And yet we just couldn't seem to get relaxed with each other."

"We saved ourselves for so long and expected it to be so good because we had done it 'right,'" she added. "It was not passionate, and it was not successful, but it was polite."

Olympian hurdler Lolo Jones spoke openly about her decision to remain a virgin until marriage. "It's just something, a gift I want to give my husband," she said in an interview with Bryant Gumbel, noting that resisting the urge is "harder than training for the Olympics." She added, "But please understand that this journey has been hard. There are virgins out there and I'm going to let them know, it's the hardest thing I've ever done in my life. Harder than training for the Olympics, harder than graduating from college has been staying a virgin before marriage."

It may not be the right decision for everyone — to restate it one more time, losing your virginity is a super personal decision that people can only make for themselves — but it's refreshing to hear stars being so honest about something so private, no matter the choice they made.

For more sex and relationships talk from Bustle, check out our I Want It That Way podcast: