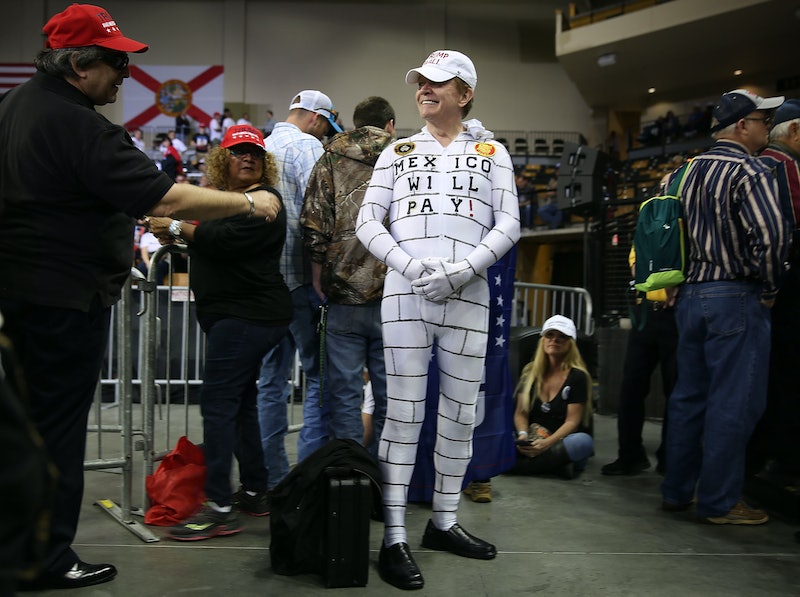 Super Tuesday has nothing on Super Saturday. The second major caucus and primary fest to take place across the country has already been full of surprises. Ted Cruz is poised to win big, having already dominated in Kansas. Bernie Sanders got asked if he could be a supporter's father. Oh, and Donald Trump's wall showed up to his Florida rally. The man was clad in a black and white bodysuit with the words "Mexico will pay" emblazoned on his chest and a white 'Trump's Wall' baseball cap completing the look, in case you weren't sure what the crude cinderblock motif of a man might be dressed up as.

The wall had patches adorning each side of his chest between the slogan, one of which appears as if it is a Marines insignia. He was occasionally seen holding a 'Veterans for Trump' sign at the packed rally, which saw thousands crowd the CFE Arena at the University of Central Florida. Given the patches and the sign, the man may have served in the armed forces. The extra accessory also offered him a chance to show off his dedication to the wall costume, which extended all the way to his fingertips. The man appeared to be positioned behind the Donald throughout the event in Orlando.

What's even stranger about the man dressed up as a wall at the Trump rally is his name. The Associated Press has reportedly identified the Tampa man as Steve Travers. Such a moniker should sound eerily familiar to House of Cards fans, who've been binge-watching the show's fourth season in hopes that the latest outlandish escapades from the Underwood administration would mimic our bizarre political reality. The character of Travers made one appearance on the show as the Homeland Security Secretary before he was fired. It looks like the fourth wall has been broken and Travers is enjoying his time away from the oval office by donning bodysuits and supporting a different kind of candidate.

Not since Johari Idusuyi, a 23 year old woman who took to reading a book at a Trump rally, has there been such a heightened interest in an attendee who wasn't getting kicked out or physically injured. Who knows what Travers will be doing with his newfound fame or which costume he will don the next time he's out supporting his favorite candidate. As it stands, no other policy from the Donald has so effortlessly translated from idea to outfit. It's unclear whether the wall will be traveling to the border of Mexico to do his job as a physical barrier between the United States and our neighbors to the south if Trump is elected president.