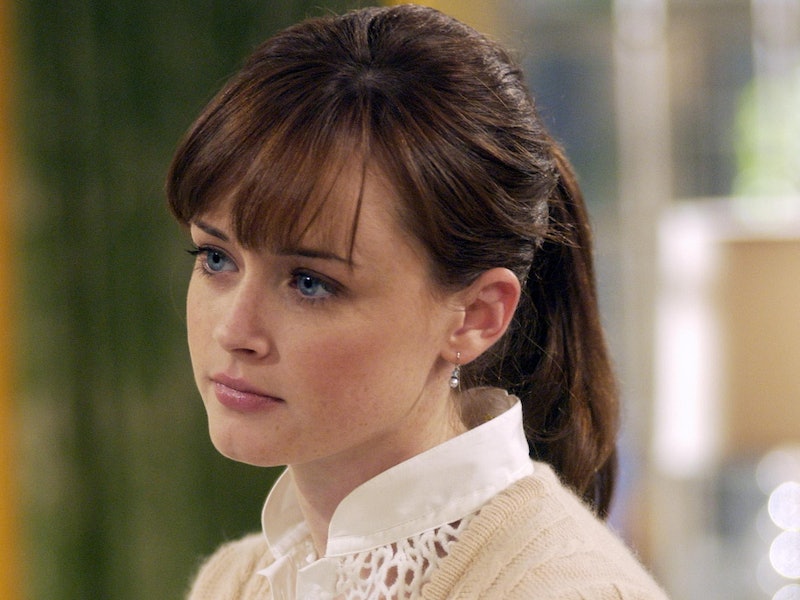 When Rory Gilmore was a silly high school girl, she could do no wrong in my eyes. Sure, she did do some messed-up stuff. She sometimes treated her best friend Lane like the co-star she was, ignoring her for boyfriends who would come and go. She broke Dean's heart for an out-of-towner who wore leather jackets and needed an attitude adjustment (although, like, let's be real, Jess was Rory's best Gilmore Girls boyfriend). But I identified with her and loved her for her mistakes. "Ah yes, Rory. I too could be a huge jerk in high school, and often did horrible things, the consequences of which I sometimes consider over and over again when I am unable to sleep." But there was one definitive moment that made it hard to root for Rory, even though I identified with her so much.

It wasn't when she started dating Logan and became a Queen of Bougie, or even when she stole a yacht and was arrested. No, the moment in which I wasn't sure I even liked Rory anymore comes when she hosts a DAR event for her grandmother. At this point, Rory has dropped out of Yale, and is living in her grandparents' pool house while she serves her time and lives a charmed life.

The episode is "We've Got Magic To Do." In the beginning, the DAR is having a gossip session at the Older Gilmore House, and they live in terror and fear that one of the ladies is going to simply ruin a fundraising event to support the troops. Rory jumps in, believing that she can turn the event around in one week. Of course she does, and she changes it up in a brilliant way: with a USO theme in which everyone gets to wear '40s-style clothes and listen to a live band play World War II-themed oldies. But this total domination of an event doesn't make me happy for Rory. Instead, I'm furious with her for wasting her potential.

This is only compounded when Lorelai confronts her father Richard about Rory's path in life during a discussion of insurance for The Dragonfly Inn. What is Rory doing spending her time on DAR events? She had the opportunity to be at Yale. It was her dream to attend an Ivy League school — something so many students can only wish for but never actually achieve –– and she left. With the sort of skills she demonstrates working on the DAR event, she could be running her own business in five years. But instead, she's spending her time making sure her ringlets really fit the whole '40s vibe (which they do, of course).

Furthermore, and though is was pretty badass on their part, it angered me that Rory's grandparents fight her battles for her. When the Huntzbergers (Logan's parents) show up at the event without tickets, Rory understandably has a bit of a panic attack. Mitchum has told Rory that she doesn't have what it takes to be a journalist, and Shira doesn't approve of Rory or her mother, so their appearance isn't exactly a blessing. While I understand Rory's anxiety, I also want her to understand that Logan isn't right for her and that the life she's leading isn't right for her. I don't want her grandfather to bellow at Mitchum in the bathroom, "You crushed that girl." I don't want her grandmother to cattily imply that Shira's husband is cheating on her. I want Rory to win their hearts on her own merit. Or, you know, just break up with Logan, never have to deal with those people again, and become an editor of the Yale Daily News.

At this point in the series, Rory has lost me because her problems don't make sense to me anymore. Sure, her boyfriend's parents don't love her, but that's not uncommon. I can't pity her anymore, because she's living a life of luxury that she doesn't quite deserve. And yeah, sure, she's just lost like all the rest of us 20-somethings, but if the rest of us had the opportunities Rory had, I hope we would make better choices. Rory has always had dreams of grandeur and power, and this episode really brings it home that she's throwing that all away for a boy.

But cheer up, Charlie, because soon after this episode, Rory is back on the path of world domination, and back to winning my heart. When we see that girl in the revival, who knows what she will have accomplished?