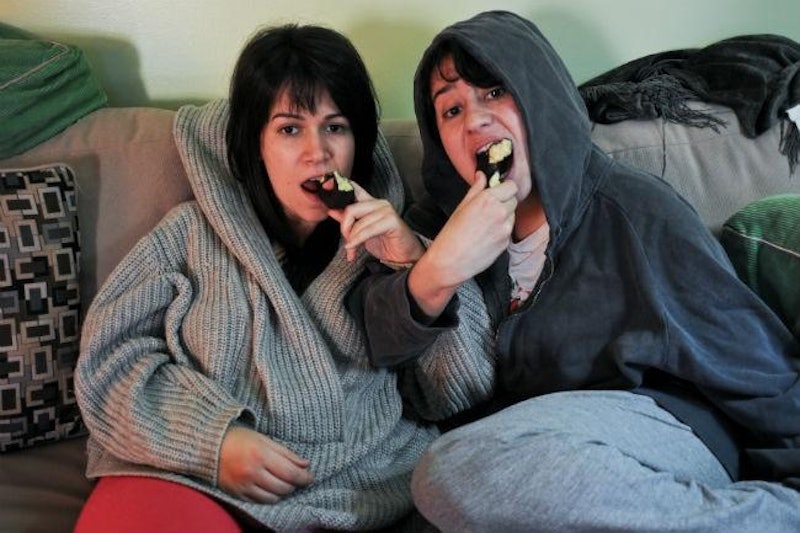 I am eternally grateful to be living in the “golden age of television,” with so much wonderful product and ample ways to watch it commercial-free. But couch-huggers everywhere (myself included) may want to reconsider starting their next series marathon because according to a study by the University of Toledo, binge-watching television may make us depressed. Spending an entire Saturday catching up on a new episode (or ten) lets us indulge that guilty inner-child who doesn’t want to go outside and play. We may even feel a sense of accomplishment after breezing through an entire series in one sitting. Though binge-watching is more common than ever before, sadly, it seems vegging out in front of screen for five hours does not make us mentally healthier.

In the recent study, researchers used an online survey to examine the TV viewing habits of 408 adults. According to the poll, television consumption qualified as binge-watching when participants spent between two and five consecutive hours in front of the tube in one day. Out of those surveyed, 35 percent self-identified as binge-watchers. And over three-quarters of the participants revealed that they had watched TV for two or more hours on an average day during the previous week — no breather necessary.

Results showed that the more time a person spent in front of a TV, the more likely they were to have a television addiction. Higher levels of anxiety, stress, and depression were also reported among those who identified as binge-watchers. Researchers caution that the study only shows “only a correlation and not causation.” While there is a clear relationship between the negative feelings and TV watching behavior, it will take further examination to know if binge-watching is caused by stress or stress is caused by binge-watching.

These results were in-line with previous research that showed a positive correlation between excess TV watching and diabetes, obesity, and depression. Another recent study by Texas A & M, surveying 18 to 29-year-olds, tied feelings of loneliness and depression to binge-watching habits as well. Lead researcher, Yoon Hi Sung of Texas A&M voiced fears about the implications of these results, "When binge-watching becomes rampant, viewers may start to neglect their work and their relationships with others. Even though people know they should not, they have difficulty resisting the desire to watch episodes continuously."

However, if you spend most of your free time in front of the TV, you are definitely not alone. According to the Bureau of Labor Statistics, the average American spent two hours and 49 minutes watching TV on a normal day. TV accounted for over half their leisure activities — more than sports, reading, playing computer games, or even socializing combined. Binge-watching may in fact be the “new normal.” Recently, the behavior has become more socially acceptable, talked about, and even encouraged. Researchers from the University of Toledo noticed that “about 85 percent of the respondents said that they had noticed advertisements or articles encouraging binge-watching.” So next time you are thinking of settling in and tuning out, you might want to hit pause. Makes you want to run outside and get some serious Vitamin D, huh?