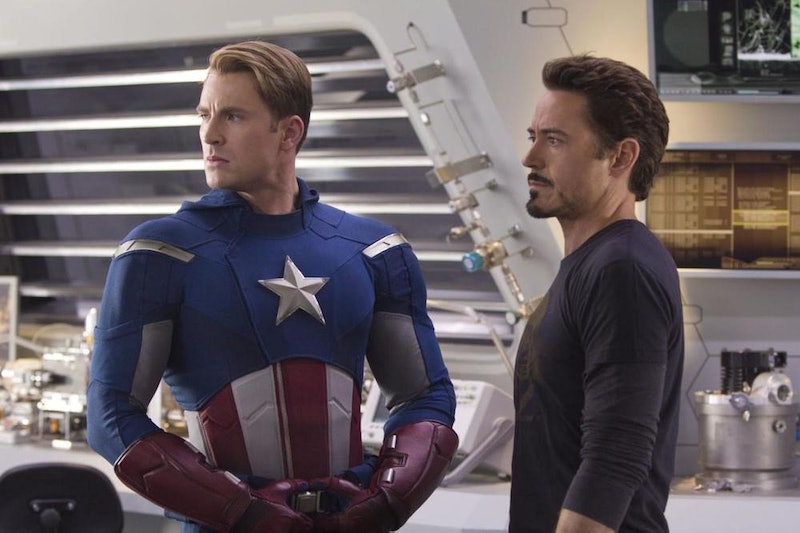 It's hot superhero against hot superhero in Captain America: Civil War. When we last hung out with the Cap back in The Winter Soldier, he had found out that one of his old buddies from the army days had, like him, been turned into an enhanced killing machine –– though this friend, Bucky, was used by the KGB and brainwashed to be an assassin rather than being on the side of good like Steve. While Steve Rogers was given a new team of Avengers at the end of Age of Ultron, all who look amazing in the new posters that are up for Captain America: Civil War, there was trouble in paradise. Tension was brewing between Iron Man and Captain America, because they are both alpha males with very different world views. The posters really capitalize on this tension with the dark color scheme and the framing outline of the metal star, the sigil of Captain America. The art behind these posters has me so interested to see how the two former friends deal with the feels of battling against each other.

But what is this third part of the Captain America series about? Due to all the collateral damaged caused by the Avengers when they save the world, politicians had called for a governing body that decides when to call the team in. The Captain has some mixed feelings about the government having its fingers in what the Avengers do (and who can blame him after all the corruption he's seen) while Stark is pretty down with the system of accountability. Meanwhile, the government is trying to kill Steve's assassin-friend, so it's Captain America vs. America while also Captain America and his Avengers vs. Stark and another crew — while the whole imminent danger of Thanos is lurking.

Remember the good ole days when everyone was friends chilling in the Avenger crib, and they all tried to pick up Thor's hammer, and nobody could? I do. Oh, how I do.

We've seen #TeamCap in these posters but the jury is still out on who will be #TeamStark.

This movie looks like it's going to be amazing –– we'll see sides of our favorite characters we've never seen before. Captain America going against the government? Gasp! Tony Stark following the rules? Double gasp! Plus, the question we'll always be asking: can we really trust Bucky? The character development is going to be up the wazoo and around the corner. I really just hope they can work this all out in time for Avengers 3, or Earth is toast.

Captain America: Civil War doesn't come out until May 6, but you can get your fangirl/fanboy yaya's out by watching this here trailer. It won't quite fill the void, but at least it's something.