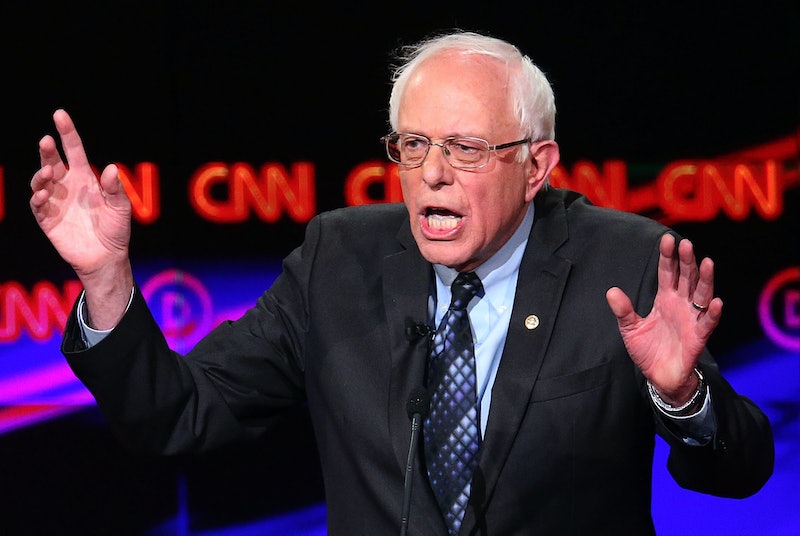 Sunday night's Democratic debate in Michigan simply couldn't hold a candle to its Republican counterpart in terms of the quantity and quality of WTF moments. With the absence of candidates boasting about the size of their genitals, voicing expected-but-still-disturbing views of LGBT Americans, or shouting at migraine-inducing tenors, the two Democratic candidates were boringly civil and substantive. Export-Import bank? America's crumbling infrastructure? Wake us up when Hillary Clinton accuses Bernie Sanders of having small feet. Still, there was one exchange during the debate that has caused many to wonder whether Bernie Sanders acted in a sexist way toward Hillary Clinton.

The somewhat-controversial moment came when the two Democratic presidential candidates were discussing the 2009 federal auto bailout, which is an especially hot topic in Flint, Michigan — a city whose ups and downs are largely tied to the U.S. auto industry. Clinton was fast to point out that Sanders had voted against the auto bailout, a fact all-but-certain to cost the Vermont senator some popularity points with Michigan voters or, at least, the Flint debate audience. When Clinton cut into his defense of his vote (which included bringing up Clinton's support of the Wall Street bailout), Sanders countered, "Excuse me, I'm talking." When Clinton attempted to interject again, Sanders proceeded to rebuff her with, "Can I finish? You'll have your turn."

Many quickly interpreted this as sexist. Across Twitter, people called him out for supposedly "broing it up" or indulging in some typical mansplaining misogyny. In fact, the uproar over "Excuse me, I'm talking" made it the second-most-discussed debate moment on Twitter, according to Time.

Perhaps because Sunday night's Democratic debate was so respectful — even, arguably, cordial — in comparison to Thursday's Republican one, much has been made about "Excuse me, I'm talking." It seems that some Clinton supporters are all too eager to hold it up as example of Sanders' "true" sexist colors finally being revealed to the American public.

It would be bad enough to inflate the significance of this one moment as "proof" that Sanders is a loose cannon or has a temperament unfit for the White House, which is what pro-Clinton group Correct the Record seems to be implying. The group released a statement in which President Brad Woodhouse claims that, “perhaps nothing from this debate will be more memorable than Bernie Sanders rudely flying off the handle – losing his temper and shushing Secretary Clinton, wagging his finger and repeatedly yelling the likes of ‘excuse me, I’m talking’ and ‘let me finish.’ It was a cringe worthy moment from Senator Sanders more fitting of the GOP debate stage than the Democratic one."

However, it is even more disturbing to see Sanders' comment labeled as sexist. And I say that as a feminist who cares deeply about fighting the many cases, expressions, and incidences of sexism that persist throughout the country and the world. But let's be clear: Sanders' "Excuse me, I'm talking" isn't one of them.

Did everyone forget that this is, you know, a debate? An exchange in which people attempt to interrupt each other and, in turn, attempt to stymie those interruptions? People who claim that Sanders' effort to keep Clinton from interrupting him was sexist or even vaguely misogynistic are setting the bar so wildly low for what it considered an offense against women that the term "sexism" loses its meaning. If nearly anything can be construed as sexist, then calling it all out will make us all like the boy who cried wolf. If we look for sexism everywhere, then we won't recognize and respond to it as adeptly as we could when there are significant, dire cases of it in front of us — whether it's U.S. legislators limiting women exercising their reproductive rights, Nigeria's law enforcement allowing husbands to legally beat their wives, or female graduate students being harassed by their male supervisors. All of those should be highly disconcerting to anyone who cares about quashing sexism. Two politicians trying to cut each other off in the middle of a debate should not.

There's another concern about labeling Sanders' tone and phrasing as sexist, given that it's pretty normal for a competitive debate. If Sanders were one-on-one debating Martin O'Malley or Joe Biden and did the same thing, I believe that it would almost certainly have gone unnoticed. Claiming that a rather innocuous debate rebuff is sexist when it wouldn't be thought of as such if it were directed at a man sets a dangerous expectation that female politicians should be treated differently. Specifically, it suggests that female politicians must be treated with kid gloves, lest their male opponents want to be accused of sexism.

Stoking such an expectation will only hurt women and feminism. Clinton has spent so much of her career fighting against the perception that women are simply inherently unqualified to serve in certain positions of power. Her supporters' charging a one-off and fairly typical debate interaction as sexist doesn't help her fight that battle. And what's especially frustrating about witnessing the outrage over Sanders' "Excuse me, I'm talking" is that it detracts from how smart, sharp, and fierce Clinton's performance was. Do her supporters forget that Clinton has testified before Congress? She can certainly handle being cut off during a debate.

Sanders' campaign doesn't appear to be losing sleep over the allegations that "Excuse me, I'm talking" was sexist, or even a misstep on the road to the White House. “I think Bernie was being himself, I think he’s a real person,” Tad Devine, Sanders’ top strategist, told Buzzfeed. “Some people may not like the way he wags his finger. That’s who he is. But we’re not going to try to change anything about him. Because I’ll tell you, the thing that’s connecting with him is his honesty, his authenticity, and the fact that he is who he is.” If America doesn't like this side of Sanders, that's one thing. But claiming that this side is sexist doesn't help Clinton. It just hurts the fight against sexism.