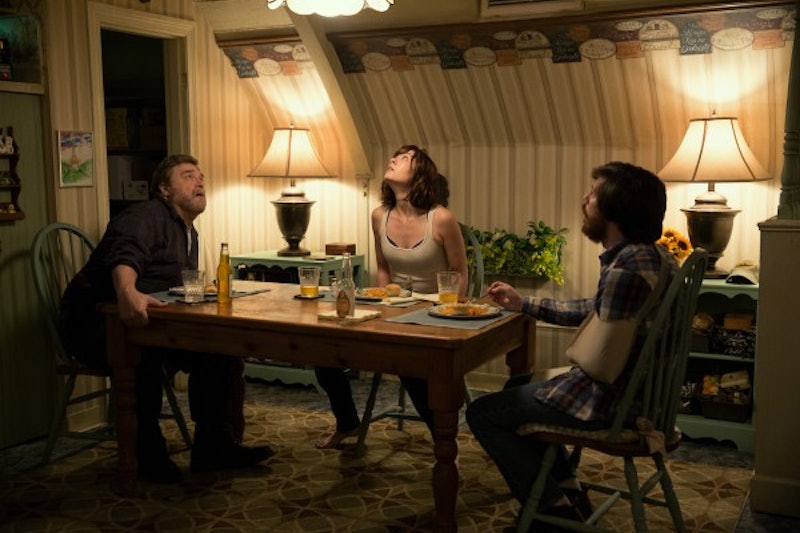 When the existence of 10 Cloverfield Lane was first revealed, the internet collectively freaked out. Handing the universe a bombshell wrapped in a bow (as he typically does), J.J. Abrams dropped a surprise trailer for the movie during this year's Super Bowl, scoring the biggest touchdown of the game. Speculation and theories about the movie's place in the franchise and who the 10 Cloverfield Lane characters are began to pop up from critics and fans alike, with many praising director Dan Trachtenberg's big debut and declaring John Goodman to be the film's monster. Admittedly, the newest photos of his character look menacing AF, but this could also be a case of Abrams steering viewers in one direction in order to completely take them off guard with the actual film.

As for other characters in the movie, the only ones fans know of are those played by Mary Elizabeth Winstead and John Gallagher Jr., who both look awfully wide-eyed and naïve in the trailer — maybe a little too wide-eyed and naïve for their own good. And, as of this week, it was revealed that Bradley Cooper officially makes a cameo in the film. But, because Abrams is a master of suspense, he's offered very little concrete information about the four people in this film and, instead, is leaving it up to his audience to figure out what the heck is going on. For now, here's a breakdown of 10 Cloverfield Lane's new characters.

Played by Mary Elizabeth Winstead, Michelle is apparently a total badass. Chased down by John Goodman's character, knocked out in a car accident, and hidden away in his bunker with maybe-good intentions, she plots her great escape. According to an interview with Empire Online, the character resonated with Trachtenberg. Said the director,

I think there’s a lot of movies that have women in peril running away from the scarier things and then end up being saved by a man, so it’s great to see this character MacGyver her way out of situations, whether physically MacGyvering away, or mentally MacGyvering a way out of something. I relate to her more than I relate to most leading men in movies.

Will Michelle become an iconic sci-fi queen like Ripley from Alien or Rey from Star Wars: The Force Awakens? I'm rooting for her!

The trailer for 10 Cloverfield Lane starts off by seeming quaint and adorable before switching it up: "Aw, look it's John Goodman playing board games and doing puzzles! That so cu — OH! It's a horror movie!" Goodman stars as Howard, a former "Telemetry Analyst" with the Tagruato Corporation and its subsidiary Bold Futura. It's worth noting that in this fictional world, the company named Howard an Employee of the Month in February 2016 and makes no note of the events in the previous movie on its website; this could mean that both films take place in the future. In the original Cloverfield film, Tagruato is a deep-sea drilling company that utilizes the skills of Bold Futura's staff, but things obviously go very wrong. According to the (amazing) online universe created in conjunction with the franchise, Bold Futura has a pretty suspicious-sounding mission:

Our engineering technology is the most superior of its kind. A machine made with Bold Futura parts works where others fall to pieces. A vehicle made with Bold Futura equipment will travel where others cannot reach. Our unique ability to function in areas of severe temperature or pressure can have desirable implications for our clients. In the past, Bold Futura has partnered with military organizations, space exploration institutions, and arms manufacturers.

The Toronto Sun reports that Emmett is "a slightly dim but affable neighbour of Howard’s who willingly entered the bunker for reasons of his own." And that's all anyone knows so far.

No word on what the actor is even doing in this film, but it's pretty cool that he's there. Trachtenberg revealed Cooper's involvement in an interview with Cinema Blend, saying it was The Hangover star's collaboration with Abrams on Alias that made this "very minor" role in 10 Cloverfield Lane happen.

Looks like fans will have to wait until the movie hits theaters before they truly know anything more about the characters. Well played, Abrams. Well played.