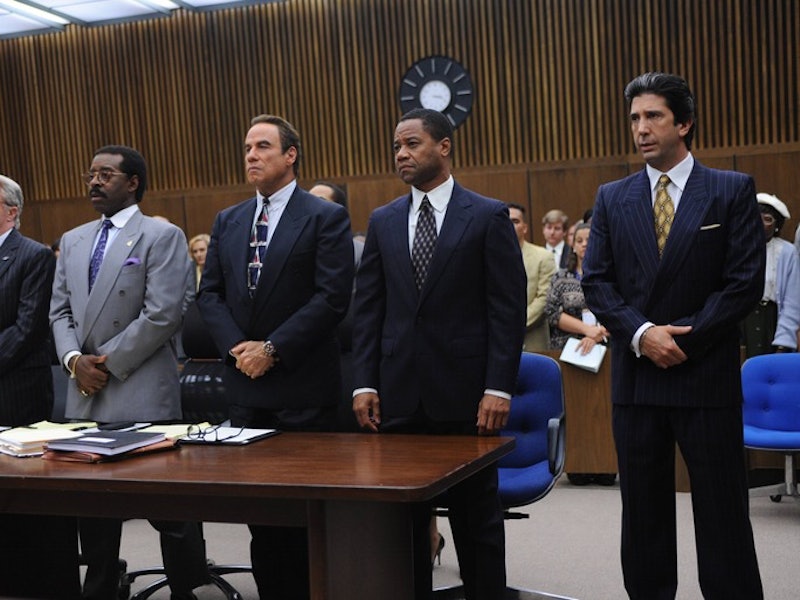 If you thought the tension that played out on FX’s American Crime Story : The People v. O.J. Simpson between lawyers Robert Shapiro and Johnnie Cochran was juicy, then you are going to love this video of Shapiro talking about Cochran. Because, in the wake of O.J. Simpson’s not guilty verdict, Robert Shapiro agreed to do two interviews: One with Larry King and one with Barbara Walters. And, as amusing as it is to hear King try to pronounce “Kardashian,” there is a whole lot of tension happening in the Barbara Walters interview that reveals a lot about what was really going on between Shapiro and Cochran during and after the trial.

A lot of it is in the subtext, of course. Shapiro keeps a relatively straight face (except for one hint of a smirk when Walters first brings up Cochran), but there is still plenty that he admits to that reveals just how much he disagreed with the way Cochran ran the O.J. Simpson trial in the courtroom. In the video, Shapiro admits to hiring Johnny Cochran, and that Shapiro hired Cochran, in part, because he was black. For a man who says he had no interest in playing the race card, he certainly set himself up for it to be played.

But it’s when Walters brings up race card that Shapiro’s surface starts to crack. When Walters reminds him that he said from the beginning that he would not play the race card, Shapiro says he remembers and that he is not happy that they did, mainly because, when it was played, it was played “from the bottom of the deck.” This, of course, refers to a sleight of hand where a dealer deals cards from the bottom of the deck — cards that he or she just recently collected and, therefore, likely knows what’s on them. In other words, Robert Shapiro is saying that the way the race card was played by Johnnie Cochran in the O.J. Simpson trial was essentially cheating. Or, if not cheating, then definitely the wrong way to play it in his opinion.

For his part, Cochran appeared on Larry King Live shortly after Shapiro conducted this interview with Walters, and had a number of things to say in response. When King brought up the Walters video, Cochran speaks openly about his take on the "feud:"

“I’m very fond of Bob Shapiro. I said yesterday, I was troubled by those remarks, and the only thing I’d respond (and I don’t want to escalate this at all) is that I enjoyed working with him during this thing. I thought that he showed a lot of character when he stepped aside and I became lead counsel in the matter. The one problem I would like him to be aware of and think about tomorrow night is that with regard to Mark Fuhrman, Bob Shapiro had started talking about him planting the glove long before I ever came on the case, and, in fact, we never played any race card. What we did was pursue the credibility card, if you can call it that. Because I think the race card trivializes the whole issue of race in America. And what really happened was the prosecution brought forward Mark Fuhrman. They’re the ones who knew that he had these genocidal attitudes, but yet they put him up there to make him like a choir boy. All we did was impeach him when he said that he hadn’t used the n-word in ten years and other things.”

When King continued, asking Cochran if he was surprised that Shapiro went public like that. Cochran responded, “I was this was like our greatest day. We were immensely happy, all of us, and so we were very very surprised to hear that… The one thing he should probably do is call OJ Simpson. He was rather displeased with those comments.”

In his interview, Shapiro claims the opposite, shirking any responsibility in how race factored into the trial, saying that it was all Cochran, and that Cochran was responsible for the defense strategy in the courtroom. Of course, in spite all of this, Shapiro denies there is any animosity between them, saying that it’s just a difference of opinion.