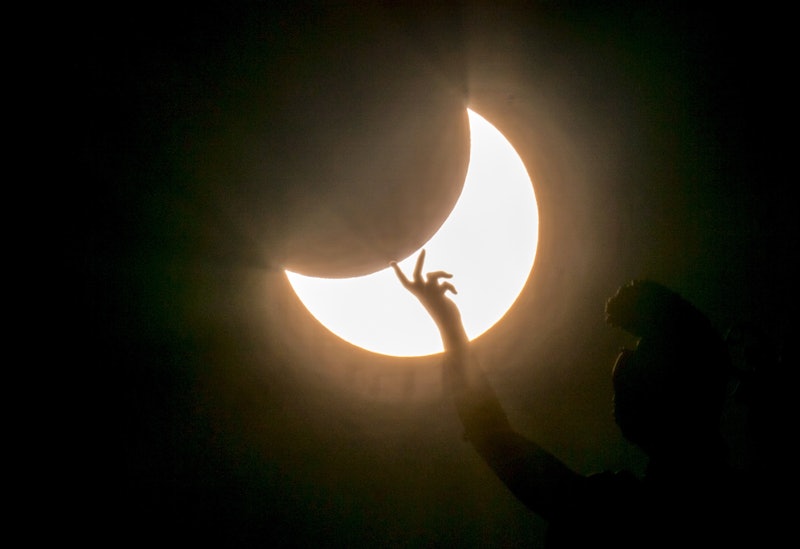 When you were a kid, you probably made one of those little eclipse-viewing contraptions in your third-grade science class — the thing with the toilet paper roll for an eye hole and mirrors set up inside a shoe box. If you still have it, then it's time to break it out, because there's a total solar eclipse coming at approximately 8:38 p.m. ET on Tuesday night. If you don't have it, and you can't remember exactly how an eclipse works, that's totally OK. So what is a total solar eclipse? It's a rare phenomenon in which the Moon totally obscures the Sun from the Earth.

Two to five times per year, the Moon comes into alignment with the Sun and the Earth, eclipsing the Sun's light and plunging the normal daytime into darkness. In outlying regions of the eclipse where the Moon isn't casting a direct shadow, only a partial eclipse is created, and the Sun looks like there's a chunk missing out of it. In areas that fall in the direct shadow of the Moon, the Sun totally disappears for up to seven minutes.

The craziest thing about solar eclipses is that (relatively) soon, they won't be possible. If you think about it on a geological timescale, eclipses have only been possible for a relatively short amount of time — a few hundred million years. The Moon is moving away from the Earth at a rate of about two centimeters per year, and used to be too close to the Earth to create eclipses as we know them today. In about 600 million years, the Moon will have moved too far away from the Earth for eclipses to block out the Sun anymore. So basically, eclipses aren't just rare on an annual basis; they're pretty rare on a geological time frame as well.

Unfortunately, the view of this eclipse won't be all that great in most of the United States because of the timing — the best view is in the Pacific Ocean, beginning just east of Malaysia and just west of the US West Coast (Hawaii, you're in luck). However, North America is scheduled to have the world's best view for a total solar eclipse coming up on August 21, 2017. Mark that date in your calendar!

More like this
The Summer Solstice Spiritual Meaning, Explained
By Jessica Booth and Brittany Beringer
The 15 Best Dresses For Hot Weather
By Andrea Gale Boerem
13 Summer Solstice Quotes To Celebrate The Longest Day Of The Year
By Sadie Trombetta
The 7 Best Waterproof Sprays For Shoes
By Marshall Bright
Get Even More From Bustle — Sign Up For The Newsletter