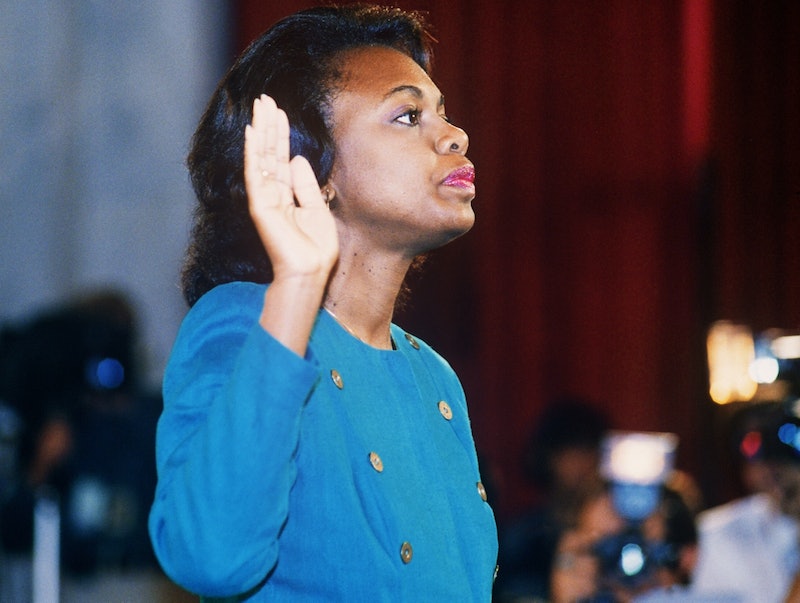 In a lot of ways, the '90s were great for girl power. Third wave feminism and riot grrrls crashed onto the scene, Lisa Simpson and Daria were challenging teenage-girl-tropes, and prolific feminist activists like bell hooks and Gloria Steinem were publishing the hell out of some really incredible ideas. But despite all these leaps and bounds forward, there were plenty of times when feminism was still trivialized in the '90s. Let's talk about a few of them, because one of the ways we move forward toward the future is by learning from the past.

With the '90s awash with third wave feminism, it's perhaps unsurprising — and welcome! — that loads of feminist pop culture moments started popping up. Screenwriters, song writers, authors, and more all began including their own interpretations of girl power... although unfortunately, not all of those hot takes were supportive or constructive. Many mocked feminists for their "millitant" views of gender, played it for laughs, or presented characters as successful despite their feminist ideals, not because of them.

And it's not just in pop culture that we see these troubling moments, either. It happened in current events, and in a number of other arenas throughout the decade. We may often look back on the '90s through a pair of aggressively rose-tinted glasses — but it's a mistake not to recognize the decade's failings, too.

These four moments highlight the ways feminism was trivialized in the '90s. Have we learned anything since then?

I've gone on record praising the Spice Girls for introducing my 8-year-old self to the basic tenets of feminism, an act which I am still thankful for — but that does not erase the fact that the Spice Girls also preached an ultra-simplified, white washed version of riot grrrl ideals. I hate to admit it, but in a lot of ways they were the embodiment of "commodity feminism," a girl group created by a record label who thought feminism would be a great way to make a profit. And honestly, they were right.

In 1991, Anita Hill, a young law professor, accused her former boss of alleged sexual harassment. Her former boss happened to be then-Supreme Court nominee Clarence Thomas. Thomas denied the allegations; he was confirmed as a Supreme Court Justice on Oct. 15, 1991.

Or perhaps more specifically, the way Jessie Spano's brand of feminism was written by the Saved by the Bell writers. As the self-proclaimed feminist of the crew, Jessie served as the butt of a whole lot of jokes throughout the show's four seasons. As she railed against the patriarchy and "macho pigism," embodying what the all-male writing team probably thought a feminist was all about, Jessie came across as annoying and hyperbolic, her feminism a hindrance to friendship, success, and romance.

4. "We're a Generation of Men Raised by Women."

That quote, delivered by Fight Club 's Tyler Durden, resonated with a generation of dudes who felt a lack of male mentorship in their lives and resented the rise of feminism and a new "female social order." I loved Fight Club growing up, but that doesn't negate the fact that a major underlying message within that book and film was for men to really Be Men, Really Masculine, Fighting Men, Not Girly Boys.

More like this
20 Christmas Movie Quotes That'll Get You In The Holiday Spirit
By Alexis Morillo
The 'Kenan & Kel' Reunion On 'SNL' Took A Dramatic Turn, Thanks To Keke Palmer
By Brad Witter
The First Trailer For 'That '90s Show' Includes So Many Nods To The Original Series
By Jack Irvin, Alyssa Lapid and Grace Wehniainen
'The Holiday' Director Just Addressed *Those* Sequel Rumours
By Sam Ramsden
Get Even More From Bustle — Sign Up For The Newsletter