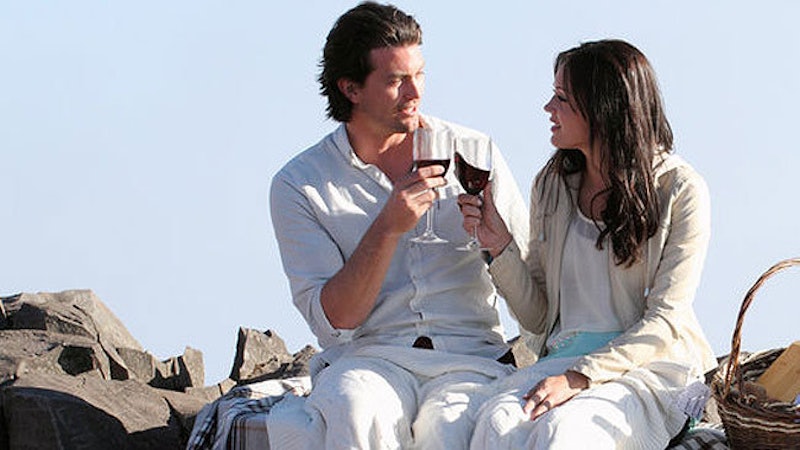 We'll get to the more important elements of tonight's episode in a second but before we do, I just wanted to offer a quick suggestion to Bachelorette producers. You go to great pains setting up Classically Romantic weeks spent in lush South American ports, great capitals of Western Europe. And they're great! But they're also built-in foundations of love (or, you know, really, really like) which is way too easy for a show that's all about competing for that same thing. Why not up the challenge a little bit by steering clear of Paris and Riviera Maya and sending contestants to some non-traditional places? I for one think we'd get a much clearer sense of what a post-show relationship looks like by seeing how the guys act in, say, Chechnya. North Korea. Really put them to the test!

Anyway, they went to Madera this week and it was f**king magical.

With just five guys left in the competition, everyone got a date. Not all of them were 1-on-1, and not all of them offered literal or figurative fireworks, but no one had any reason to complain. (With Ben and James gone, what would our knitting circle even criticize? Subpar hair products?) A week away from the home visits -- where you'll remember Des' run ended last year -- these date metrics have seriously RAMPED UP. We're not just talking about basic human compatibility anymore. This is will-you-spend-the-rest-of-your-life-with-this-reality-contestant decision-making of the first order. Are you in love? You said no? Then GTFO, man, WHO NEEDS YOU?!

Rather than an elaborate run-down of one of the night's dates as has been our custom these past however many weeks (16?), we're going to cover all four here and suss out the winners and losers. I mean obviously Michael lost, and we're very upset for him*. But the men -- they're just one element of a much larger Bachelorette ecosystem that needs constant attention and dissection, especially in recap form.

On the minimal turnaround time required of these recaps it's hard to say whether the mountain Des and Brooks visited was, in fact, called "Cloud Nine," but true or not they really made it work. Des' objective for their afternoon together? To "let him know where I am." Above the clouds of Madeira, backed by a Lord of the Rings-lite score, I think she accomplished her mission. But Brooks…didn't quite meet her there. Sure, he said the right things. Kissed right. He wants to "put the puzzle pieces together" and answers "yes, if that's something you want" to the prospect of Des meeting his parents. But on the spectrum of "adjectives" Des came up with to describe the stages of falling in love, Brooks could only say that he's "jogging"…when Des is running. Will they be able to reconcile their different speeds? Brooks got a Rose, but this guy smells something unpleasant up ahead.

Chris pursued his time with Des much more actively, so active in fact that he decided today was the day to say "I love you." Chris being Chris, he incorporated poetry into at least 30% of the date. First, on an island they sailed to, where our two lovebirds composed a dual number that they then sent off into the ocean. Stuff about flowers and nature, you get it. Finally, finally, it was time for a quiet candlelit dinner where he could say his piece, again through poetry. For a few verses he danced around the statement at hand -- "words with so much meaning," etc. -- before diving in. Des' reaction? "Chris!" Soft kisses. More soft kisses. "That was beautiful!" To the camera, she had a lot less to say than she did after her date with Brooks. "For him to be so open and ready for that is….huge." That's...diplomatic? If Des winds up getting burned by Brooks next week, it's just as likely Chris will be burned by Des.

Michael hadn't logged any previous alone time with Des, which made him that much more anxious to make this date count. Continuing the downward slide from CLOUD NINE, Des and Michael made their way around Madeira before taking a back alley toboggan ride, and -- you guessed it! -- a candlelit dinner. Here was Michael's chance to prove he's more than just "trustworthy" or "loyal," both qualities Des was forced to mention a bunch when she couldn't think of anything else. (It's true though -- he WILL always tell you what the other women in town think of you. To protect you!) To be fair, Michael really sort of lost interest in the whole competition as soon as Ben and James were eliminated. The fire had gone out. I mean, I don't want to crap on a guy who says his "heart is exploding in his chest." And who then calls his mom right after being eliminated to talk repeated rejection, romantic frustration, etc… But still. (NO ROSE.)

At this point you're aware that neither Zak nor Drew, their skin powered almost exclusively by Hollywood Tans, was sent home last night. It would have been so easy to make their go-cart race elimination-based, thus sending home Drew the tiny-eyed baby. He didn't, successfully navigating the "most pivotal day of his life," and you know -- here we are. Both guys got to say their peace to Des. Zak came just short of proclaiming his love, offering instead an artistic rendering of great moments they'd shared. Drew just creepily described his family and used the words "I've been hogging you this whole time!" which should see him arrested, or at least forbidden from watching any more of The Bachelorette. Drew ultimately earned the date's Rose, but the good news is both of Des' suitors got to kiss her on the cheek at the same time.

(Which, really, makes us all winners.)

SINCERE NOTE: At this point, I'd argue that Zak is the least TV-bullshitty of any of the guys still vying for Des' attention. I didn't think much of him at first -- what is there to think of anyone at first -- but in the intervening weeks he's demonstrated a sincerity and sense of fun that doesn't feel like a contrived TV character. Michael's post-elimination talk with mom? COME ON. But Zak seems legit, even with the over-reliance on product. That's the best I can do for a compliment with this show.

With Michael gone, we're down to four guys (sorry, one pre-ordained winner, two chaste kisses goodbye, and one future Bachelor) who all seem sane enough except for Drew, who "slipped" past ABC's "extensive psychiatric evaluations." What will happen next week? Will every one of the guys cry? This show is a fun slice of weekly summer entertainment at the same time it's the most dire wake-up call to men I've ever seen.