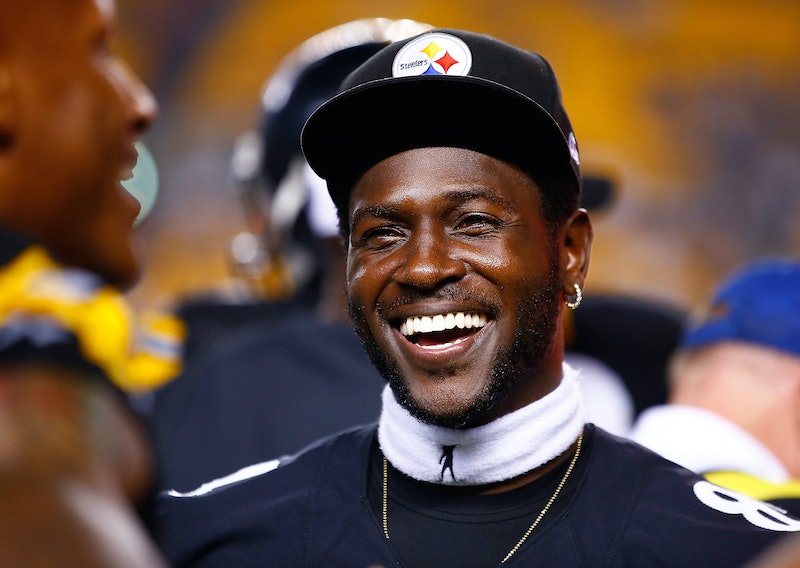 The dance floor is boomin! Sorry, that phrase will only make sense to fans of Pittsburgh Steelers player Antonio Brown, who will soon be dancing up a storm on Dancing With the Stars. It's hard to believe the ABC reality dancing competition is entering Season 22, but the show has definitely acquired (once again) a variety of celebrities, including 27-year-old Brown. So, who is Antonio Brown?

As previously stated, A.B. is a wide receiver for the Steelers. Per the official Steelers website, he first signed with Pittsburgh in the 2010 NFL Draft and signed a 5-year contract extension in July 2012 with the team. So, if you're a huge Steelers fan (BTW, I was raised to root for Pittsburgh teams), then it appears he'll be around for awhile. Ever since signing with the Steelers, Brown has easily become a favorite player, not to mention a really good one.

Seeing as he's pretty talented on the field, what does that mean for the ballroom dance floor? Actually, he admitted to SportsCenter there are some struggles that come with ballroom dancing. "Being able to move with good posture," he said about the toughest part, so far. "As a football player, we want to move as explosive as we can with no technique and be as fast and fluid as we can. Just learning how to move with good posture and keeping my shoulders down."

That said, Brown is also facing some pressure, especially since his former Steelers teammate Hines Ward won a previous season of DWTS. "The pressure is definitely on me to win," Brown said during his SportsCenter interview. "Hines already set the standard with Steeler nation."

Speaking of Steeler nation, those who root for the Pittsburgh team know that Steelers have a lot of fans — and passionate ones at that. It's safe to say that most, if not all, Steeler fans will have Brown's back, meaning he could easily take home that mirror ball trophy with their support. Obviously, that remains to be seen, so until then, let's get to know Brown a bit more.

He is the father of four, and based on his social media, especially Snapchat, he loves his children dearly. He has three boys, Antonio Jr., Autonomy, and Ali, and one girl, Antanyiah.

He's Made His Own DWTS Hashtag

If you want to show your support to Brown, then be sure to use #TonyToeTap with every post. Apparel with that very same hashtag is also available on his official website.

Seriously. He posts A LOT. If you consider yourself a die-hard fan, then follow him, stat. His Snapchat username is: AB84Official.

He Has His Own Slogan

Now that he is on DWTS, viewers will probably hear this all the time. Brown is known for saying, "Business is boomin!" First, he'll ask, "How's business?" Then, you must reply, "Boomin!"

He's All About Giving Back

As Brown says on his official website, "The amount of people you bless is how you measure success!" For example, in January 2016, Brown surprised a paralyzed fan by calling him. "I thought it would be special because he is a football player who got caught in a freak accident," Brown said. "His friends said he is a big fan. I thought if I can just give him a call and maybe offer him some encouragement in that moment in time with what he was going through, hopefully it would make him feel better and hopefully help in his recovery.”

He Has Many Moves

I mean, it sure looks like he'll do well on DWTS, doesn't it?

With that, here's hoping Steeler nation has A.B.'s back!