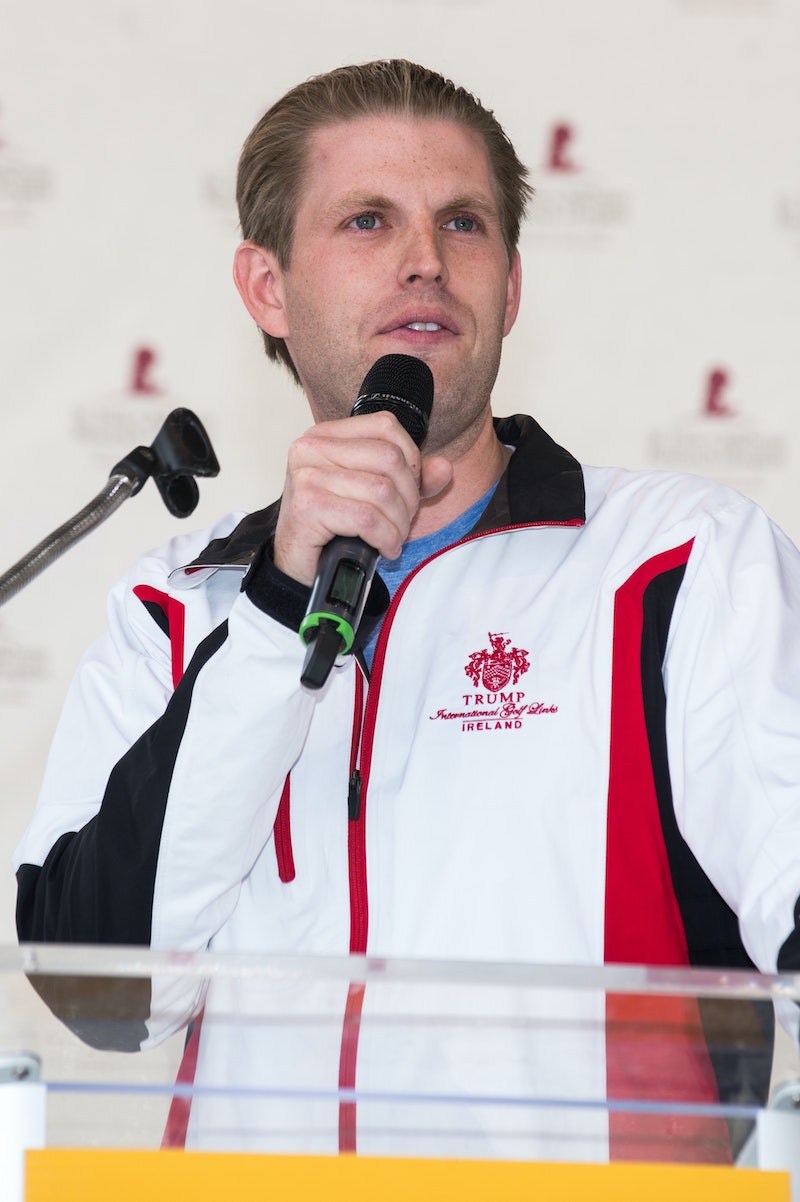 With all the coverage Donald Trump has received since announcing his bid for the 2016 Republican presidential nomination, it seems impossible to think there's anything we don't know about the real estate mogul and reality TV star. When we see him up on stage bullying his fellow candidates and making unsettling penis references, it's easy to forget that this man is a father. In fact, The Donald has five children, one of whom is Eric. So, who is Eric Trump?

Eric, 32, is the youngest child from his father's first marriage to Ivana Trump. He was only six when his parents split, and Ivana gained custody, reported New York. Eric was eventually sent with his older brother, Donald Jr., to a boarding school in Pennsylvania.

Eric described his childhood to The New York Times as more normal than you might think, but noted that Donald Jr. pretty much raised him. He said, "My father, I love and I appreciate, but he always worked 24 hours a day." He told New York that he was brought very close to his slightly older sister Ivanka after the divorce: "She took me under her wing and raised me, took me shopping, tried to make me cool."

The Times reported that Eric attended college at Georgetown University and began working for the Trump Organization in 2006. In 2012, he proposed to his girlfriend, Lara Yunaska, who he'd been dating for five years, with a ring from sister Ivanka's jewelry collection, according to Business Insider. Eric married the former TV producer and personal trainer in Palm Springs, Florida.

Eric serves as an Executive Vice President for Trump Organization, along with Donald Jr. and Ivanka; Eric's focus is on construction. He founded the Eric Trump Foundation, reported Business Insider, which has donated over $28 million to St. Jude Children's Research Hospital. Eric Trump also owns the largest wine vineyard in Virginia, Trump Winery.

During his free time, Eric Trump can be found hunting and campaigning for his father. Eric and Donald Jr. joined their father in Iowa leading up to the Feb. 1 caucuses in the state, serving as guests on radio shows and bringing their guns to shooting ranges and open fields to show that the name "Trump" isn't necessarily synonymous with cushy, big city living. Eric Trump is not just his father's son, but his father's supporter in the 2016 election.