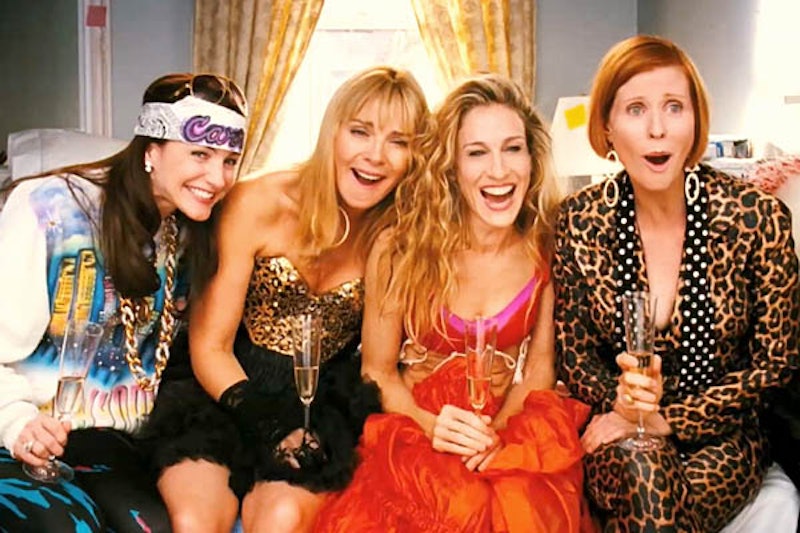 Stop condescending to single women, says Sara Eckel at Salon, in a plea to end the Sex and the Cit y-style stereotyping of single women. "We still don't really know how to talk about single women in our culture," Eckel writes. The spinster stereotype is on the wane, as is the power-hungry "career women" with shoulder pads and no plan to marry. The pop cultural image that sprung up in its place was feminine, pretty ladies having a great time together and spending a lot of money on shoes (a very pre-recession spirit). But it's probably time to move on.

While "a vast improvement on old models," writes Eckel, this image "quickly descended into caricature — the boozy party girl, the intellectual lightweight whose brainwork mostly revolved around dating rules and snaring those designer boots at 40% off."

In her reality, things looked a lot more like the picture Kate Bolick showed in her 2011 Atlantic essay. But while Bolick attributed all this singleness to a scarcity of marriageable men, Eckel's experience is much more positive. Women who in generations past may have stayed in a so-so relationship are more free to move on, without fearing it'll doom them to poverty or at least a lifetime alone. "The single life isn’t a prison sentence nor is it a cocktail party," writes Eckel.

"It is simply a life — a life with responsibilities and rewards, good days and bad ones, successes and failures. ...you gain strength when you learn to listen to your own voice and live life on your own terms. There is so much out there that tells single women there’s something wrong with them. But there is so much right with single women today."

Eckel's friends, mostly "grown-up professionals" in their 30s, are at different life stages — something many of us can recognize. You probably already have some friends that are married and maybe starting families, others who couldn't be further from it. Among my friends, it's still about a fifty/fifty split as we head past 30. Like Eckel's, my unmarried female friends are all driven, interesting, and relatively happy professionals.

Some are in long-term, committed relationships but not planning — yet, or ever — on getting married. Some go on a series of dates with people they find on their smartphones. A few recently broke up with long-term partners. Some are starting new relationships, with people they met through social or professional circles. It's all over the place, but most do seem to have the goal of finding someone for long-term romance. In the meantime, however, all are living their unmarried lives pretty happily and well. And they spend more time swigging canned beer in jeggings and co-ed company than sipping girly cocktails in sleek bars with blown-out hair.