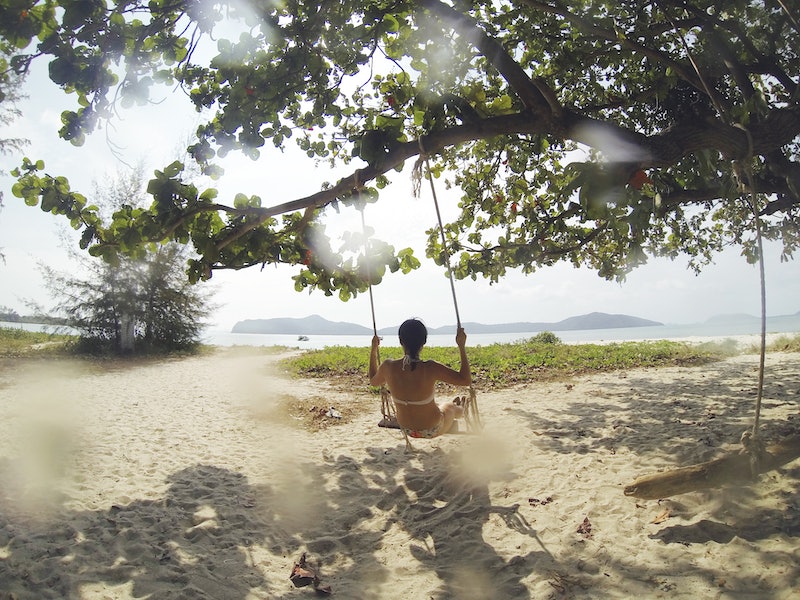 With spring break just around the corner (for those of you still lucky enough to have a spring break, that is) now is the perfect time of year to kick back with some amazing travel memoirs, written by women wanderers. And hey, even if you aren’t one of the lucky souls spending the last 10 days of March traveling the globe these year, these travel memoirs will still put you in the spring break spirit. Sometimes that’s all you need, right?

When I was a student, I admit, bikini-and-colada locales weren’t really my jam (although, one of these days I’d sure like to visit one). My pals and I would do things like go backpacking through the Amazon rain forest instead, or head to Europe and stuff ourselves in the world’s best bread and cheese. We also took our fair share of alternative spring breaks — staying stateside, volunteering for a great cause or nonprofit, and learning just as much about ourselves as we would have hitchhiking across, say, Nepal. But whatever your own spring break vibes are, these travel memoirs will definitely have you reaching for your passport.

Here are nine travel memoirs that will put you in the spring break spirit.

1. A Field Guide to Getting Lost by Rebecca Solnit

This book is all about the joys of getting lost—which is really the whole point of travel after all, yes? From meditations on the linguistic origins of the word “lost” to an examination of walking as the oldest form of travel, the journeys Solnit takes in this book are far less direct than stepping onto an airplane and heading off into the unknown, A Field Guide to Getting Lost is definitely the perfect wanderlust-y read for putting you in the spring break spirit.

2. Nothing to Declare: Memoirs of a Woman Traveling Alone by Mary Morris

What is travel if not a journey out into the world, only to find ourselves? Nothing to Declare: Memoirs of a Woman Traveling Alone explores just that question, as writer Mary Morris moves to Mexico, then travels to Guatemala, the Caribbean, and Honduras, seeking out the kind of soul-revealing experiences that all great wandering provides. Along the way she encounters people who offer her their friendship and kindness, and it is through these relationships that Morris really begins to see what it’s like not just to travel through other countries, but what it’s like to live there.

3. Gorge: My Journey Up Kilimanjaro at 300 Pounds by Kara Richardson Whitely

From Eat, Pray, Love to Wild, some of my favorite memoirs are about women who take to the road in the wake of heartache, loss, and struggle, in order to reunite with their truest selves. Gorge: My Journey Up Kilimanjaro at 300 Pounds is one such memoir, about Kara Richardson Whitely’s struggle with food addiction, and all the feelings of failure that came with it. Kara decided not to let her body hold her back, and climbed Kilimanjaro exactly as she was — and rose to her greatest self in the process as well.

4. In a Sunburned Country by Bill Bryson

OK, so I know I said all these memoirs were written by women — and I have to admit, the woman-on-the-road journey is my favorite journey to take. But no list of travel memoirs is complete without the inclusion of Bill Bryson, so bear with me. In a Sunburned Country is an account of Bryson’s journey through Australia — a landscape like none other on earth, filled with bizarre wildlife, one-of-a-kind locals, and a whole lot of adventure.

5. Around the Bloc: My Life in Moscow, Beijing, and Havana by Stephanie Elizondo Griest

South Texas native Stephanie Elizondo Griest couldn’t have picked three locales more different from her hometown than Moscow, Beijing, and Havana to travel to — but that’s exactly what she did in her memoir Around the Bloc: My Life in Moscow, Beijing, and Havana , a chronicle of her adventures working in and traveling through the world’s communist countries. Through it all she learns Russian, makes lots of friends, and doesn’t ever appear afraid to say yes to everything, if it'll make a great story.

6. Sideways on a Scooter: Life and Love in India by Miranda Kennedy

Miranda Kennedy is your quintessential twenty-something traveler — after leaving a fast-paced job in an even faster-paced city (New York) she travels to India with no job, and few plans. But five years later, she still finds herself living the Delhi life, surrounded by women who could not be more different from one another, nor from Kennedy’s friends back home. It’s these friendships, described in Sideways on a Scooter: Life and Love in India — and her immersion among women who, for all intents and purposes, still live within an ancient culture even though the society around them has globalized — that put Kennedy’s life back in the states into a whole different perspective.

If you’ve ever felt the wine-and-cheese-saturated lure of Paris, then Alice Kaplan’s book, Dreaming in French: The Paris Years of Jacqueline Bouvier Kennedy, Susan Sontag, and Angela Davis is a must-read. This book takes readers on a journey not only to the great City of Light, but into the past where the then-unknown Jackie Kennedy, Susan Sontag, and Angela Davis traveled as young women, discovered themselves, and changed their lives forever. Taking readers into the lives of three radically different young women, who would all grow up to be three radically different cultural icons, Dreaming in French will leave you feeling like a journey to Paris will certainly change your life too.

8. Life Is a Trip: The Transformative Magic of Travel by Judith Fein

Life is a Trip: The Transformative Magic of Travel is an account of 14 different journeys taken by Judith Fein. From Mexico to Vietnam, and a whole lot of places in between Fein not only takes in the gorgeous, diverse scenery around her, she snags bits and pieces from global ways of live as well. From mourning death to resolving family discord to the ways “success” changes depending on where you are in the world, Life is a Trip is all about the ways travel will change the traveler forever.

9. Beyond the Sky and the Earth: A Journey into Bhutan by Jamie Zeppa

A 22 Jamie Zeppa left her comfortable Canadian life behind and moved to the Himalayas — the remote, Buddhist kingdom of Bhutan, to be exact, where just gaining the correct visa requirements to travel there in the first place is a journey unto itself. But as you’ll read in Beyond the Sky and Earth: A Journey into Bhutan , it was well worth the challenge. In Bhutan Zeppa meets equal amounts of magic and struggle — from learning the language to living without electricity, to falling in love both with the people and the breathtaking land in which they live.