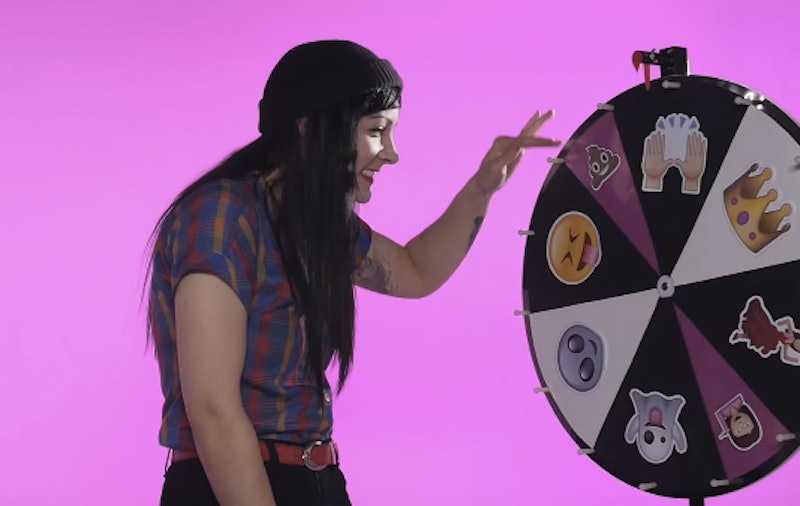 Bringing a whole new meaning to "playing it fast and loose," these people playing tattoo Emoji roulette are really taking some chances on permanently modifying their bodies in the name of a viral video. The video in question, by Elite Daily, sees some young, brave, cool people spinning an wheel of emojis and committing to have Tattoo Artist Amanda Mas ink them forever more with the random emoji chosen by the wheel of fate. Would you spin a wheel and risk having an eggplant emoji tattooed on you? Or an emoji poo? I certainly would not, but then, unlike the people in the video, I'm not already sporting many tattoos. Ranging in their tattooed-ness, the volunteers go from having "some" tattoos to having "lost count" to actually having a pizza rat tattoo. So an emoji tat probably isn't as much of a big deal to them as it would be to their less seasoned peers.

Given that tattoos are pretty expensive, I suppose this is a cheap and efficient way to get one, even if it is leaving the design mostly up to random chance. And the people involved seemed generally pleased with their risky decision making process. Here's how leaving your tattoo choice up to a roulette wheel of emojis works out:

I mentioned that each person involved here had varying levels of tattooed-ness, and I would be completely remiss if I didn't include the guy with the pizza rat tattoo showing it off. Because telling you there's a pizza rat tattoo and then not showing it is like Thanksgiving without eating yourself into a food coma.

No one actually wants the poo Emoji. I mean, would you? One lucky guy actually gets it, and is weirdly hyped on it. I suppose if you're going to get poo, you ought to make lemonade out of it. Or something.

Then comes the moment of destiny, where the soon-to-be-tattooed spin the wheel to find out what emoji they'll be forever joined to...

4. Seriously Though, No Poo

This woman was still pretty pleased she didn't get the poo. To be honest, the "100" Emoji was probably the best anyone could have hoped for in this situation.

5. Unless, Of Course, You Landed On The Poo Emoji

Whatever you need to tell yourself, dude...

6. A Little Anecdote From The Tattoo Artist

If you were wondering if emoji tattoo roulette was the weirdest tattoo a person could do to their body, Amanda politely reminds us that this experiment is, in fact, quite tame compared to what some people do by choice. So next time you're worried about a tattoo choice, remember it's never going to be as bad as having to live with your ex's name on your vag.