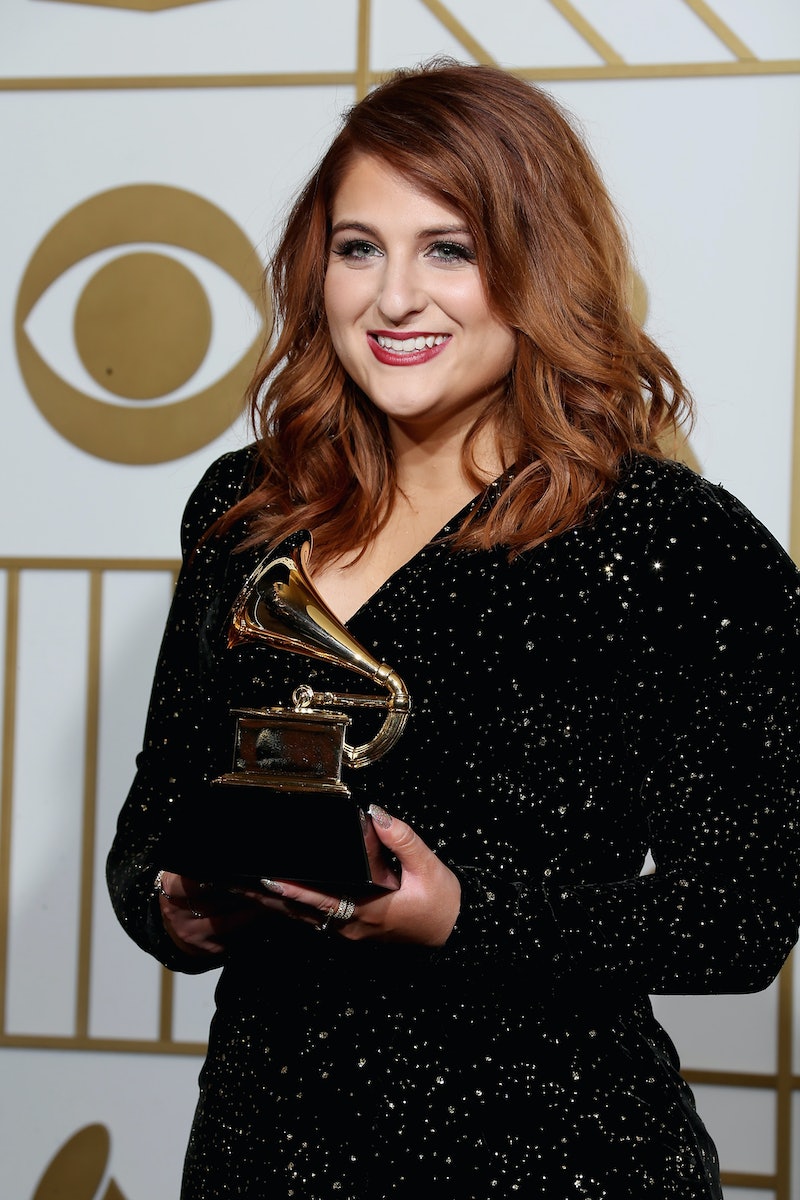 I've always been, as One Tree Hill's Peyton Sawyer so eloquently explained, a "lyrics girl." What does a lyrics girl (or person) mean, exactly? Well, according to Peyton, "They're the ones you see with the CD insert out like 5 minutes after buying it, pouring over the lyrics, interpreting the hell out of everything." Save for the outdated "CD insert" reference, girl was pretty spot on. That said, my latest album that I'm "pouring over" is Meghan Trainor's. And, I need to know... What do Meghan Trainor's "No" lyrics mean?

Well, I can tell you with utmost certainty that it does not mean what I, or Ryan Seacrest for that matter, thought that they did. You see, "No" definitely is about a man that she's displeased with, but not in the way that you'd assume. This song does not have any romantic or sexual attraction roots at all. Trainor's "No" is reminiscent of Sara Bareilles's stick-it-to-the-man moment with, "Love Song." In both instances, these jams were sorta, kinda made as creative "F yous" to the powers that be.

On On Air With Ryan Seacrest, Seacrest asked Trainor if she was "into" the elusive "guy" she sings about in "No" at one point. To which she answered, "Actually, 'No' came because I had a meeting with L.A. Reid, and I was like this is my album, isn't it dope? And he was like, 'You don't have your bullet... you don't have a single.'" Trainor then responded, "I know you say this to everybody, but I got it. I have multiple singles, I think I have eight." And Reid said definitively, "No. You don't have, 'the one.'" So, Trainor explained that she went to the studio in a fury and then recorded it.

In fact, as you were jamming along to the chorus of "No" which goes,

You were actually helping Trainor tell the incomparable L.A. Reid to take a hike. The singer said to Seacrest, "You hear me say, 'You need to let it go.' I was like, 'Give it up, dude. This music is good. Let me put it out." So while you get all in your feels about your ex-hookup/significant other/Tinder date/random creep when you hear these lyrics, that's not actually what they were about.

First you gonna say you ain't runnin' gameThinkin' I'm believing every wordCall me beautiful, so originalTelling me I'm not like other girlsI was in my zone before you came alongNow I'm thinking maybe you should goBlah, blah, blahI be like nah to the ah to the, no, no, no

Wonder in the universality of music. It's all up to interpretation anyway, isn't it? Just because Trainor didn't write it with a former flame in mind doesn't mean you can't direct your karaoke performance of this song to yours. It's still a jam worthy song on all accounts.