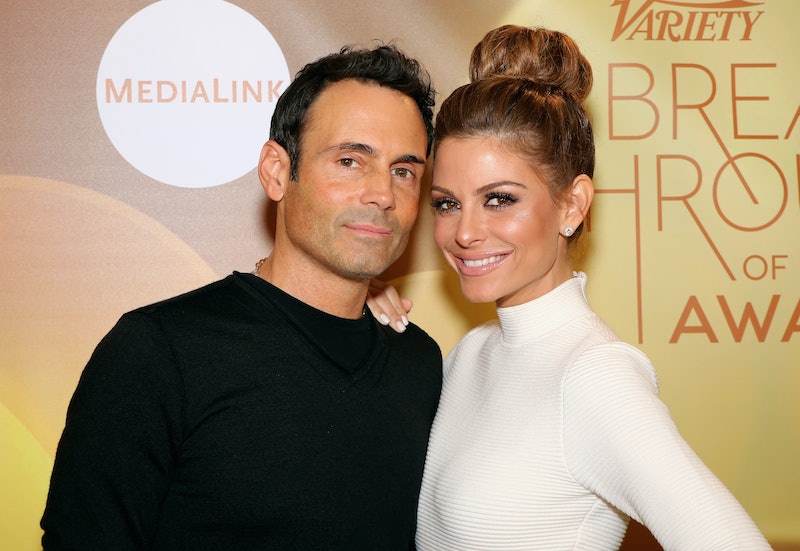 Maria Menounos has been on TV in some form or another since 2002, so it feels like we've known her forever. She started as a correspondent for Entertainment Tonight in 2002, and her career has steadily blossomed in the years since, making her a familiar face on TV thanks to regular appearances on Access Hollywood, Today, and Extra, among others. But Menounos has had one important mainstay in her life as her career trajectory has risen: her now-fiancé Keven Undergaro. Undergaro and Menounos have been together for nearly 19 years, which is an eternity in celebrity years, so I set out to find out who Undergaro is and what he's all about.

The couple, who have been dating since 1998 (seriously!), got engaged in a very unique way: Undergaro proposed while Menounos was promoting her new book, The EveryGirl’s Guide to Cooking, on Howard Stern’s SiriusXM radio show. Stern was clearly in on it, asking Menounos just prior to Undergaro popping the question if she wanted to marry him, setting the stage for an epic live proposal. Then, Undergaro came out, and said, "Although I said that this isn't a proposal I want to ask you something, Maria," then got down on one knee. "Will you make me the happiest man on Earth?"

Menounos, at first, seemed confused, but excitedly said yes. So now that she and her longtime beau are headed for wedded bliss, I can't help but want to know more about him.

1. He's In The Entertainment Industry

Undergaro is a TV/film producer and director. He's worked on short comedy films, full-feature films, and he and Menounos created AfterBuzz TV , which is a podcast that features TV recaps. He also served as executive producer for their short-lived Bravo reality series Chasing Maria Menounos in 2014.

2. He's Not Big On The Spotlight

Despite his brief stint on reality TV, Menounos has been open about the fact that Undergaro is happy letting her stay in the spotlight. She told HollywoodLife in 2014, "Keven has been comfortable being the man behind the woman for so many years, and that’s such a great example for men that it is OK." She also told Parade in 2014,

Keven has not been in the public eye ever. He’s never walked red carpets with me. He doesn’t go to events. People think he’s a ghost in this town. I’ve had many male celebrities come up to me, and they’re like, "Come on, he’s like the Snuffleupagus. He doesn’t exist." I’m like, "Yes, he does. He just doesn’t like coming out here." It’s been really hard for him, because he loves his anonymity, and he really just loves being behind the scenes. But you can’t tell the story of our family without Keven.

3. Her Family Initially Didn't Approve Of Their Relationship

Menounos is of Greek Orthodox descent, and she has said her parents were not pleased with her dating someone of a different background. She told AOL, "He wasn't Greek so my dad was very upset, pretty much disowned me, took my education away... I was now pretty much homeless, no education, no degree, but I had Keven." Undergaro called the beginning of their relationship "Romeo and Juliet without ending in full tragedy." Yikes. Luckily, her parents seem to be on board now. They happened to be celebrating their 41st wedding anniversary and joined the newly engaged couple on Stern's show.

4. He's Her Number One Support System

Several years ago, Menounos came public with the admission that she had been sexually abused multiple times by doctors, and now she routinely takes him with her to appointments, where he sits with her in the exam room.

Undergaro and Menounos do not have children together, but they do have a full house: They've adopted three Bichon Frises named Benjamin, Winnie, and Baby, who enjoy plenty of fame on Undergaro's Twitter and Instagram accounts. Aw!

What a beautiful couple these two make. I have a feeling the future will bring nothing but happiness to both of them!