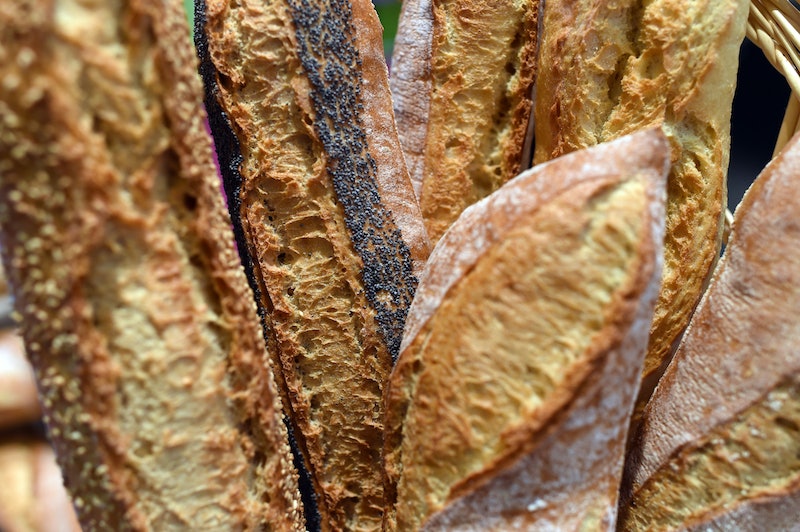 There are days when the world is lovely and the sun is shining, the birds are singing, and everything is going your way. And then there are days when it turns out that carbs might be linked to cancer. Today, alas, is the second kind of day. That's right: According to new research, eating the wrong kinds of carbs might increase your risk of lung cancer. Basically, everything good in life is trying to kill you.

In a new study by researchers at the University of Texas, scientists looked at the dietary habits of lung cancer patients as well as healthy participants, particularly at the type of carbs they ate. They found that eating carbs that were high on the glycemic index — things like white bread, pretzels, white potatoes, and cornflakes — seems to be connected to having a greater risk of developing lung cancer. Which is some sad, sad news for all the pasta lovers out there.

Now, of course, one study isn't enough to definitively prove anything. After all, there could be other factors to explain the results, other than the possibility that carbs cause cancer. It's possible that people who are more likely to eat carbs high on the glycemic index are also more likely to have some other risk factor for lung cancer — though the researchers did rule out smoking, so if there is another common thread, it's not the obvious one. Still, one study isn't conclusive evidence yet.

It also cuts both ways, though — for instance, this study only looked at lung cancer, meaning it's possible carbs could be linked with all sorts of other cancers, too.

Ugh, why is everything you love secretly so terribly for you?

Curiously, the study also found no connection between cancer risk and the quantity of carbohydrates participants ate in a sitting, meaning it doesn't matter how much you eat at once when it comes to carbs and cancer — only what kind of carbs you're eating — which is both good and bad depending on how you look at it. On the one hand, that means that you can't just eat small portions of your favorite foods and figure it'll be fine; you have to cut them out entirely to be really safe. But on the other hand, this does mean that if you are eating carbs high on the glycemic index, you don't have to stress about portion size.

So far, this is just one study, but still, cancer isn't anything to mess around with. So it might be a good time to take a good look at both your diet and the glycemic index, and see if maybe you want to try cutting some things out.

Or, you could just put your fingers in your ears, hum loudly, and pretend that this isn't real and today is a good day after all.