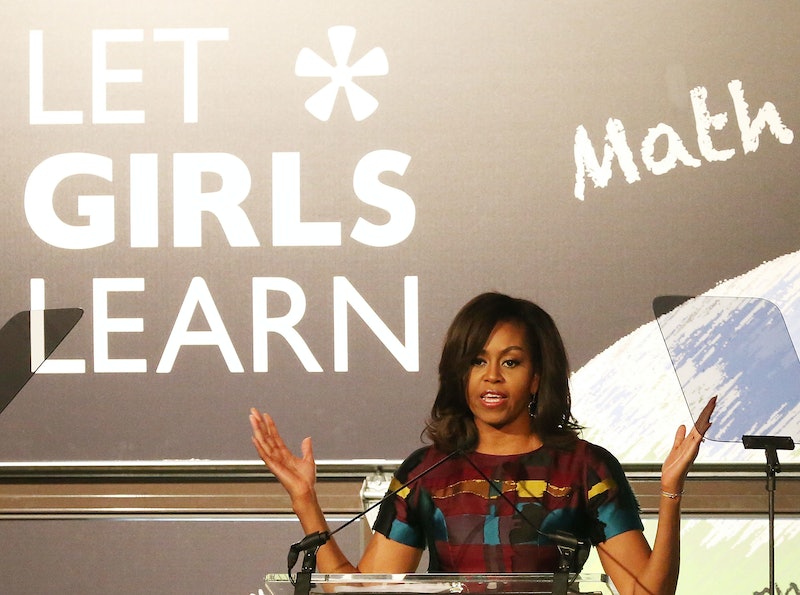 March 8 was International Women's Day, and the first lady used the occasion to take a serious stand against subtle, learned sexism in the workplace and elsewhere. While promoting the White House's newest initiative, called "Let Girls Learn," Michelle Obama denounced the seemingly innocuous hold casual sexism has on our society. "Like most women, I know what it feels like to be overlooked," she said. "And like many of you, as a woman, I take all of this personally." Obama went on to say that she had experienced casual sexism in her own life. She referenced examples that were hopefully from before she was first lady, such as people only half-listening to her ideas at meetings or assuming that one of her male subordinates was actually the one in charge.

Using her bully pulpit as FLOTUS to call out the kinds of casual sexism that all women and girls have to reckon with is an important, necessary reminder that there is still work to be done before true gender equality is achieved. Luckily, Michelle Obama isn't one to shy away from a challenge. Last year, while delivering a speech on women's rights in Qatar, Obama mentioned a visible metric of societal sexism: the test scores of girls in primary school versus the scores of those in secondary school.

"I don't think it's an accident that we've reached gender parity in primary but not secondary education," she said. "When they hit adolescence and start to develop into women, and are suddenly subject to all of their societies' biases around gender, that is precisely when they start to fall behind in their education."

Let Girls Learn is just the latest effort that First Lady Obama has undertaken to exemplify a more just society. Replanting the first White House kitchen garden since the victory garden Eleanor Roosevelt made in World War II, as well as installing an apiary on the South Lawn, have been two strong signals to the public that access to fresh, healthy food would be an important part of the Obama Administration.

Indeed, Obama has been credited with establishing guidelines for healthier school lunches, as well as encouraging the USDA to expand a pilot program which let SNAP recipients double the value of their food assistance whenever they shopped at a farmer's market. While these may seem like small changes to some people, it's important to understand the political and economic power behind Big Agribusiness in D.C. and elsewhere.

From her time as a public servant for the City of Chicago, Obama has demonstrated a consistent desire to do right by the public. Taking the time to specifically call out the toll that casual sexism takes on women in public life is just par for the course for her. No offense meant to Vice President Biden, but as the Obama Administration draws to a close, I am left wishing the Obamas had pulled an Underwood. The president has announced that the family plans to stay in D.C. following the conclusion of his second term — maybe that means Michelle has designs to remain in public service in some capacity as well. The American public should only be so lucky.