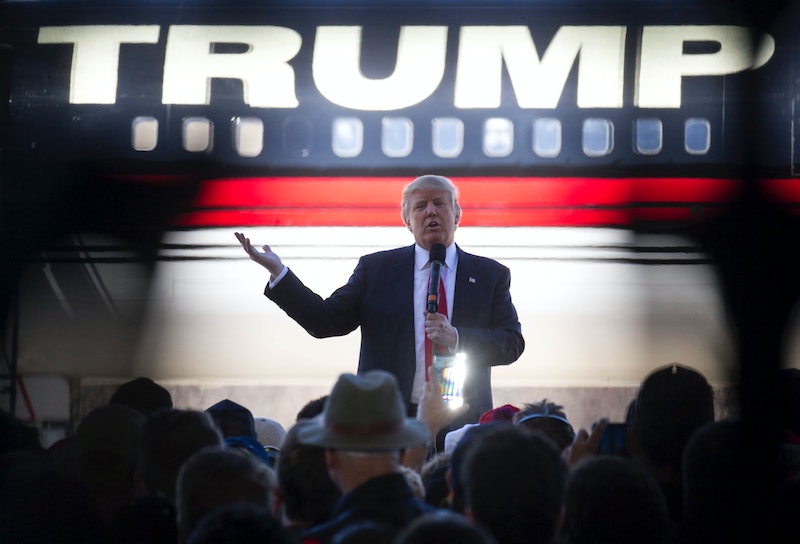 Current Republican presidential frontrunner and problem that cannot be wished away Donald Trump has used his alleged success in the business world to sell the voting public on his ability to hold the highest elected office in the land. Recently, he's touted endeavors like "Trump Vodka" and "Trump Wine" as testaments to his supposed business acumen. Trump Airlines has also gotten a few mentions. You can't buy a ticket for Trump Air on any travel website I've seen, so what happened to Trump Airlines, anyway? The answer probably won't come as any sort of surprise.

Trump Airlines, which had the official name of Trump Shuttle, Inc., was an ill-fated venture that lasted from 1989 to 1992. Trump "bought" — and I put that in quotation marks because he didn't pay for it himself, he arranged for a loan of $380 million from a consortium of 22 small banks to finance the transaction — a profitable division of the troubled Eastern Airlines with operations in the Northeastern United States. The airline began service on June 23, 1989, with its hub at LaGuardia Airport in New York City. Flights were scheduled between LaGuardia and Logan Airport in Boston, as well as Washington National Airport in Washington, D.C. (now Ronald Reagan Airport) and Orlando Airport.

The airline had problems immediately, and never ended up turning a profit. The loans went into default in September of 1990, less than a year and a half after the airline began operations. While there was an emphasis on luxury fixtures and cutting-edge technology — laptop rentals, anyone? — Trump's failure to understand the needs of his customers, coupled with a massive spike in the price of jet fuel resulting from the first Iraq War, meant that the venture failed spectacularly.

Operation of Trump Airlines officially ceased in April 1992, after it was rolled into the successor firm Shuttle, Inc., later renamed US Air Shuttle. All that remains of Trump's airline ambitions seems to be his personal aircraft. A 43-seat modified Boeing 757 ferries Trump from one campaign stop to another, and is outfitted with all the necessary accoutrements to travel "Trump Style," whatever on Earth that oxymoron is supposed to convey.

So the next time the former reality show host mentions his so-called business success, remember that his idea of "success" — having his name scrawled on large phallic objects — is just the adult version of the same standard that middle-school boys worldwide aspire to.