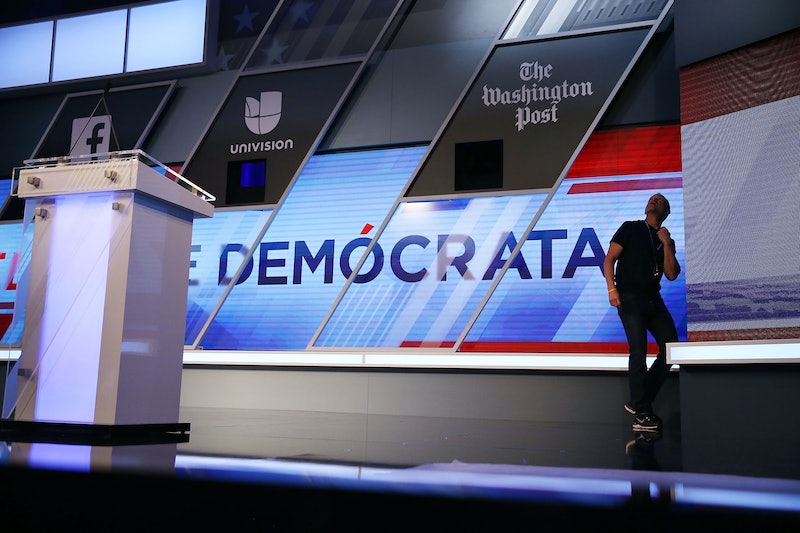 The Sunshine State's day in the spotlight is almost upon us, and there's a whole lot on the line. On March 15, both parties will hold their primaries in Florida, and the outcomes figure to have a massive impact on the shape of the nominating races going forward. On the Republican side of things, the state carries a considerable number of delegates — 99 in all. But what about the other side? How many Democratic delegates does Florida have?

It's actually a far higher number, in keeping with the Democratic Party's higher total number of delegates — they require a candidate to hit the mark of 2,383 to secure the nomination, while the Republicans only need 1,237. Even so, the difference is rather stark. There will be a staggering 291 delegates on the line come Tuesday's primary contest.

There is yet another crucial distinction that sets Florida's Democratic primary apart, however. Unlike the GOP, for which Florida is a winner-take-all contest, the Democrats stick to proportional delegate allocation. In other words, even with the higher total number of delegates, the Democratic race's raw impact figures to be less stark than it'll be for the Republicans, barring an absolute bloodbath in Clinton's favor — which, based on current polling as well as the Democratic voting trends seen across the south, is certainly a possibility.

The proportional system of delegate allocation may ultimately be the biggest obstacle facing Sanders' candidacy at this point. As FiveThirtyEight's Harry Enten noted in the immediate aftermath, Tuesday night's Michigan victory for Sanders was one of the biggest primary upsets ever, relative to what the polls indicated going in. But by virtue of proportional delegate allocation, he actually lost ground overall thanks to the flat-out drubbing he took in Mississippi, where he lost with just 16 percent against Clinton's 82 percent.

As a result of that tradeoff — a narrow win in Michigan and a collapse in Mississippi — Sanders' delegate deficit actually widened by 18 on Tuesday night, despite him undeniably winning the news cycle and the much-ballyhooed war of expectations. That's why coming from behind is such an imposing task in the Democratic primaries — and that's without even addressing the ever-controversial superdelegate system. In short, whatever happens in Florida for the Democrats probably won't be as numerically decisive as it will be for the GOP. But assuming the polls are correct, which is admittedly no certain thing after what just happened in Michigan, Tuesday night could place Sanders' hopes in even greater peril.