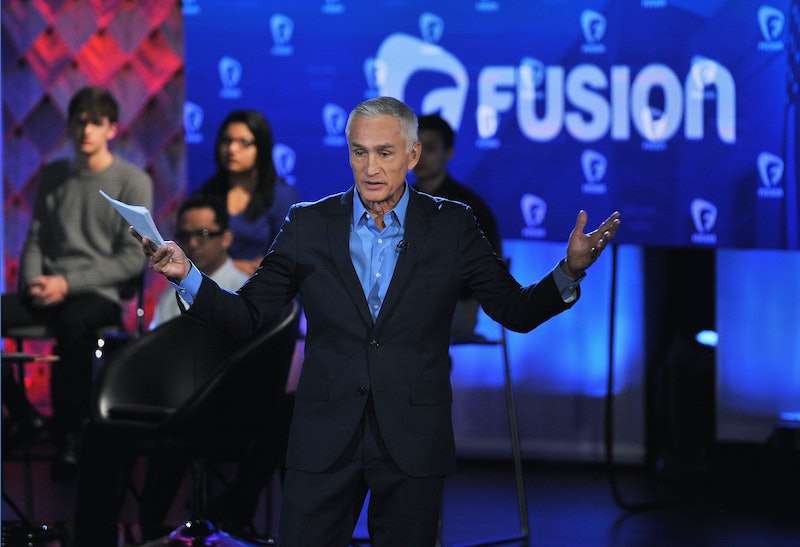 Jorge Ramos is one of the best-known Latino-American journalists in the media. As an anchor for Univision and a moderator of Wednesday's Democratic debate, Ramos has had to challenge his fair share of political candidates. This time around, though, there's something particularly personal about his job: Ramos' daughter, Paola, happens to work for one of the candidates: Hillary Clinton.

At the start of Wednesday's debate, Ramos noted his familial connection to the Clinton campaign, probably to prevent any allegations about his impartiality throughout the night. It's not the first time that Ramos has disclosed his daughter's loyalty to Clinton. Back in June, he published a note via Fusion, one of the networks that he works for, explaining his daughter's connection to Clinton and vowing to remain unbiased throughout the election:

As journalists the most important thing we have is our credibility and integrity. We maintain that, in part, through transparency with our audience, our colleagues and our critics. That is why I am disclosing that my daughter, Paola, has accepted a position working with Hillary Clinton’s presidential campaign.

At the time, Ramos also explained that he was proud of his daughter's activism and that he supported her decision wholeheartedly. He also noted that he is not the only journalist to have a family member in politics. He reiterated a short disclosure before asking Clinton her first question on Wednesday — and he seemed to live up to his commitment to not take it easy on her.

It's unclear exactly what Paola's position within the Clinton campaign is, although it would appear that she works on the communications team. That's fitting, considering her father has long been hailed one of the most influential Mexican American communicators in the country. Regardless of her title, though, Ramos has clearly forged a successful career path of her own, just like her father.

In May, Ramos graduated with her Master's degree from Harvard University. Her father penned another one of his touching notes to mark the occasion. Something that he wrote seems particularly important now that she is involved in the election: "You could be President, or if you want, you could fight against a President. Or write. Or everything." She's not running for president yet, but she could be playing a vital role in electing the next president.

According to her Twitter profile, Ramos also graduated from Columbia University, presumably with her Bachelor's degree. She also has experience working for the White House and the office of the vice president. Ramos was probably under the same roof as her father on Wednesday, but there's no doubt they were working very different roles.