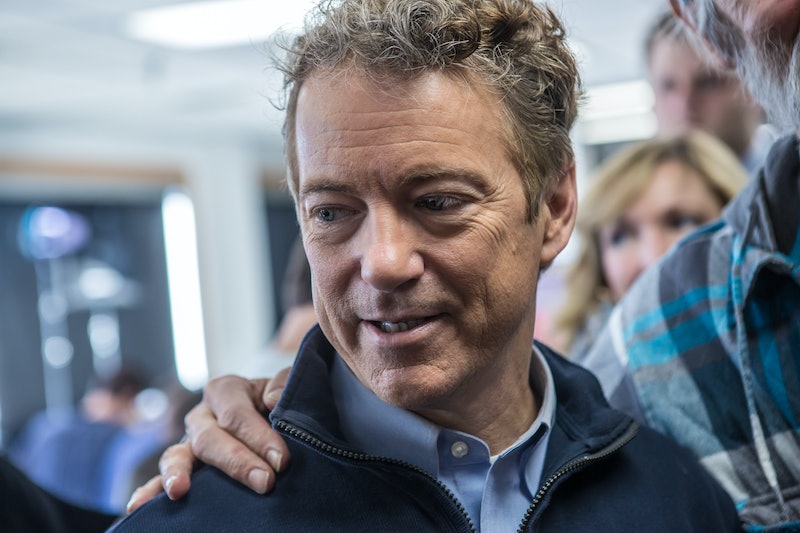 During Wednesday night's eighth and final Democratic debate, there was a whole lot of contentious fire going back and forth between Bernie Sanders and Hillary Clinton, and as usual, it sparked a wide world of teeming conversation on social media. Including a decidedly strange weigh-in from a certain junior senator from Kentucky — Rand Paul chimed in on the Democratic debate on his Twitter account, complete with a playlist suggestion for any viewers at home.

The tweet was actually just one in a tweetstream — or, if you prefer, tweetstorm — relating to Clinton's campaign playlist. If you missed it, it was widely reported recently that the Clinton campaign had paid $90,000 to a Portland music agency called Marmoset in exchange for a campaign playlist, including such ubiquitous hits as Kelly Clarkson's "Stronger" and Katy Perry's "Roar."

It drew a lot of derision, given the decidedly mainstream nature of the playlist, but according to Marmoset's CEO, it wasn't true — the Clinton campaign was paying them to use the music in online content, not to merely assemble the list itself. But that was the angle Paul went with on Wednesday night, pitching an array of tunes for her campaign, and citing one song in particular for Democratic debate viewers to blast.

The song Paul suggested viewers of the Democratic debate ought to listen to? Andy Grammar's "Good To Be Alive," released on his album "Magazines of Novels" in 2014. It's not abundantly clear what point if any he was trying to make here ― his previous tweets all had thematic hooks, like calling Clinton a liar and recommending "Little Lies" by Fleetwood Mac ― although he did disclaim that this one "has nothing to do with anything."

So, presumably it's just a song that Paul really, really loves? He's got a penchant for being a little more playful on social media than most sitting senators, even when there's an explicitly political message behind it (he also attacked Clinton's position on the NSA by suggesting "Every Breath You Take" by The Police). But perhaps this is just a window into the Kentucky senator's eclectic music tastes? In any case, if you're interested in heeding Paul's advice, you can catch an earful of his chosen jam from the video embedded above.