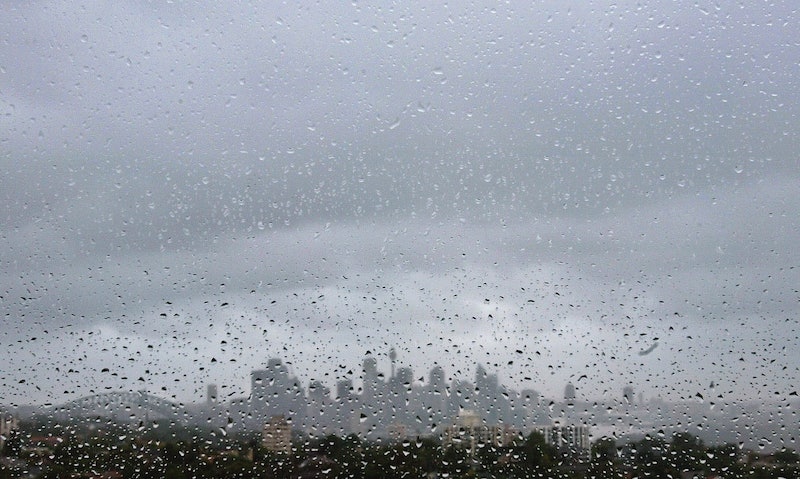 When it's cold and raining one day, and dry and warm the next, does the changing weather make you feel sick, crazy, ill, achey, or all of the above? If so, you are not crazy; it turns out that changes in weather systems can have a lot of effects on the human body and brain. A lot of the science on how weather affects health focuses on static weather states: cold temperatures, rain, hot weather, and so on. But it's when things are in flux that the implications for our bodies get really interesting. Weather, after all, is rarely in one state for a long period of time (I live in England, so you can trust me on that one), and the shifts between states have consequences for our sinuses, joints, hearts, and lungs.

One big culprit is air pressure: as you'll have learned in 8th grade science, an increase in air pressure (a rising barometer) means better weather, while a drop means cold and rain. (There was some evidence a while ago that small atmospheric shifts might actually increase erratic behavior in children, though the initial study's very tricky to find.) But temperature is a culprit too; we're acutely sensitive to shifts in heat and cold, and our body reacts accordingly.

So here are the ways in which fluctuations in weather may be exacerbating your health conditions, making your life a bit miserable, and are generally deserving of a fist-shake out of your window.

In a survey of migraine sufferers by WebMD, a full 53 percent of them ticked "weather" as a major trigger. It turns out that falling barometers and sudden temperature shifts are genuine migraine triggers. Approaching hot weather in particular appears to be a serious problem: for every nine degree temperature increase in Fahrenheit, the risk of a migraine among sufferers apparently increases by 7.5 percent. Frequent migraine sufferers sometimes require steady climates without significant change, to reduce the nasty possible effects of swift weather alterations.

2. Heart Attacks And Asthma Are Linked To Cooling Weather

Winter itself is a poor time for heart problems, because cold weather narrows blood vessels and restricts blood flow. (There's a reason why doctors tend to recommend that heart-vulnerable patients don't shovel snow or do vigorous activities outside in freezing weather.) And medical science, it seems, can actually track the likelihood of heart attacks in a certain area by tracking the environment's lowering of temperature.

It's not the shift itself that's causing the problem here (it's the coldness itself), but it's an interesting alarm bell: a drop in daily temperature by as little as one degree Celsius corresponded with an additional 200 heart attacks. Heart attack specialists probably keep a close eye on the dropping thermometer.

When it comes to asthma, meanwhile, it seems that the shift itself is actually the problem. Fast-dropping temperatures (for instance before a thunderstorm) can wreak havoc on asthma sufferers, as a sudden shift that cools the airways very fast apparently exacerbates asthma symptoms. One study found a three percent increase in asthma hospital visits on days following thunderstorms.

3. Shifting Barometric Pressure Might Cause Joint Pain And Headaches

Yes, your grandmother's aching joints possibly could predict the weather. Maybe. Barometric pressure drops in colder weather, like what comes before a storm, and the downward shift in pressure is theorized to cause the soft tissues of the body to expand very slightly, causing pain from increased pressure in arthritic, sensitive joints.

When it comes to barometric pressure and headaches, it appears that the problem is a difference in pressure between the air on the inside of the head and the outside. The resulting pressure gap can cause significant sinus pains and engender head-splitting aches. More terrifyingly, Harvard reports that serious air pressure differences between the inside and outside of the body have been theorized to lead to collapsed lungs, as the air inside the body expands and places too much pressure on the lung walls. But it seems unlikely that the difference in pressure could be sufficiently drastic if caused by weather alone.

Sleep apnea is a particularly terrifying condition where the body actually stops breathing during sleep, due to muscular collapse on the airways or some kind of airway blockage. It also seems, according to work done by scientists in 2010, that a downward shift in air pressure worsens it. They looked at 537 patients, and saw that their sleep apnea significantly worsened the lower the air pressure got.

This shouldn't be too much of a surprise, since the most common treatment for sleep apnea is to wear a CPAP device or mask, which stands for continuous positive airway pressure. The mask's air is calibrated to be slightly higher in pressure than the outside atmosphere, which keeps airways open. But on the bright side, it's an easy way to pretend to be Darth Vader.

5. ... But Changes In Weather Won't Give You A Cold Or Weaken Your Immune System

There's one big thing that temperature changes don't do: they don't create more colds or weaken the immune system. Warming or cooling weather can create problems, but it's not responsible for viruses themselves or your susceptibility to them (if a cold pops up during a weather change, it's more likely due to shifts in behavior that expose you to viral carriers). The cold virus can replicate more rapidly at colder temperatures, so you're more likely to get ill once temperatures drop and stabilize there.