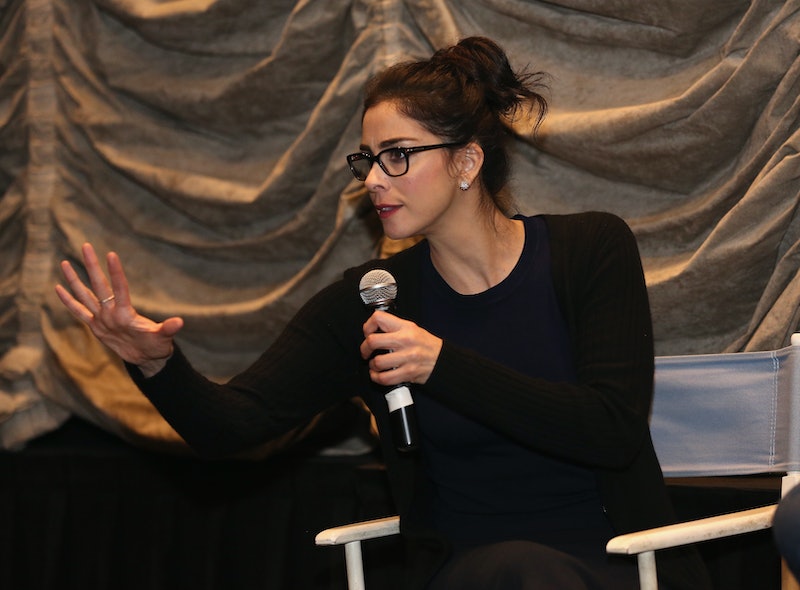 While celebrity stumping has become a hallmark of the modern never-ending U.S. presidential election cycle, it seems even more prominent in this go-around. Hillary Clinton generally seems to lead the brigade, with her upcoming appearance on Broad City and tweets from the set of Scandal. And sure, Clinton may be able to claim Lena Dunham for her corner, along with America Ferrera, Katy Perry, and a slew of other female celebrities eager to tweet #ImWithHer to their legions of fans. But Bernie Sanders has got Sarah Silverman — and her support explains a lot about why women haven't been a consistent slam dunk for Clinton.

Silverman's more than eight million Twitter followers have been watching her feel the Bern for months. Back in June of 2015, when most thought that Sanders would be little more than a speed bump on Clinton's road to the Democratic nomination, Silverman was already throwing her social media weight behind the Vermont senator. The attention paid to her endorsement paled in comparison to the hype around Dunham stumping for Clinton in New Hampshire, or the pro-Clinton video featuring more accomplished and famous Hollywood women than could reasonably fit in a standard New York City apartment.

But Silverman is the kind of endorsement that should perhaps give the Clinton campaign some concern — not because she is more famous (or even as famous) as some of the former secretary of state's backers, but because she was formerly in the Clinton camp. Throughout her tenure as a Sanders surrogate, Silverman has been quite open about how she once supported Clinton. "This isn't an anti-Hillary thing," she said when she appeared on HBO's Real Time With Bill Maher last week. "An alternative came along." She stressed the same point in an essay she wrote for Lenny about why she's supporting Sanders, saying point blank that "Hillary was my choice before Bernie came along."

The reason Silverman switched her allegiance? Campaign funding. She's made no bones about this when explaining her support for Sanders, whether in writing or on television. Silverman likened the Citizens United ruling, which allowed unlimited corporate funding for political campaigns, to unregulated steroid use by baseball players. Clinton "takes money from super PACs, as most candidates do, as Obama did before her," Silverman wrote in Lenny. "I accepted it as a necessary evil. As the way it was. If all the ball players are taking steroids, then you have to take steroids too in order to compete." She explained that her mindset changed when "Bernie Sanders, senator from Vermont, entered the race. Not only is he not for sale, this guy is running on reversing Citizens United, breaking up the banks, and holding the billionaire class accountable for paying their fair share of taxes."

It goes without saying that those remarks are a simplification of the situation, and that Silverman's change shouldn't exactly leave Clinton quaking in her boots. Still, the fact that Silverman felt compelled to switch her support may explain why other female Democrats have left the Clinton train. And Silverman should be given a bit more consideration than other celebrities jumping into the election fracas. Although she is best known as a comedian and actress, she has long been active in championing Democratic causes, especially as a reproductive rights advocate. The election and Democratic politics in general are more than a cause of the week for Silverman; she has fairly legitimate credentials.

In 2013, Silverman worked with NARAL and the New York Abortion Access Fund to host a telethon, Clear Eyes, Full Heart, Can Choose, for Texas women struggling under the state's restrictive abortion laws. In 2008, she worked with The Great Schlep, a group devoted to getting younger Jewish voters to convince their grandparents in Florida to vote for Barack Obama in 2008.

If someone with a documented, devoted commitment to the Democratic party — and specially women's-focused issues like reproductive rights — thinks that Sanders is the better candidate, that is bad news for Clinton. When Clinton is up against someone who has as strong of a pro-choice record and progressive position as her — and some would even say a stronger record — it may be really hard to sell her as the better option for American women.

Silverman's other reasons for supporting Sanders also allude to another problem Clinton has had in wooing voters across all typical Democratic demographics: authenticity. Speaking of Sanders to Maher, Silverman said, "He's been on the right side of history at every turn — not along with history, not when it becomes popular, but before it's popular." It's hard not to read that comment as a jab at Hillary, who has been accused of being too swayed by trends and, specifically, being a johnny-come-lately on gay rights, endorsing same-sex marriage only after it was clear that American public opinion had become more favorable toward it.

Celebrity endorsements should be treated with not just a grain of salt but a whole damn shaker. With the exception of Oprah supporting Obama in 2008, rarely do they seem to make a significant (if any) difference in election outcomes. I highly doubt that Silverman's support for Sanders will swing a notable chunk of voters to him. But Silverman is not the only female Democrat to make the switch from Clinton to Sanders, and it may behoove Clinton's campaign to pay attention to her, and other women's, reasons for doing so.